A multidisciplinary study with researchers from the Austrian Academy of Sciences characterized a novel gene, known as FIBCD1, to be likely causative of a new and rare neurodevelopmental disorder. Using data from two young patients with neurological symptoms, the researchers from both groups found evidence of a novel function for the FIBCD1 gene in the brain, and a potentially pivotal role in diseases such as autism, ADHD, schizophrenia, and neurodegenerative disorders including Alzheimer’s. 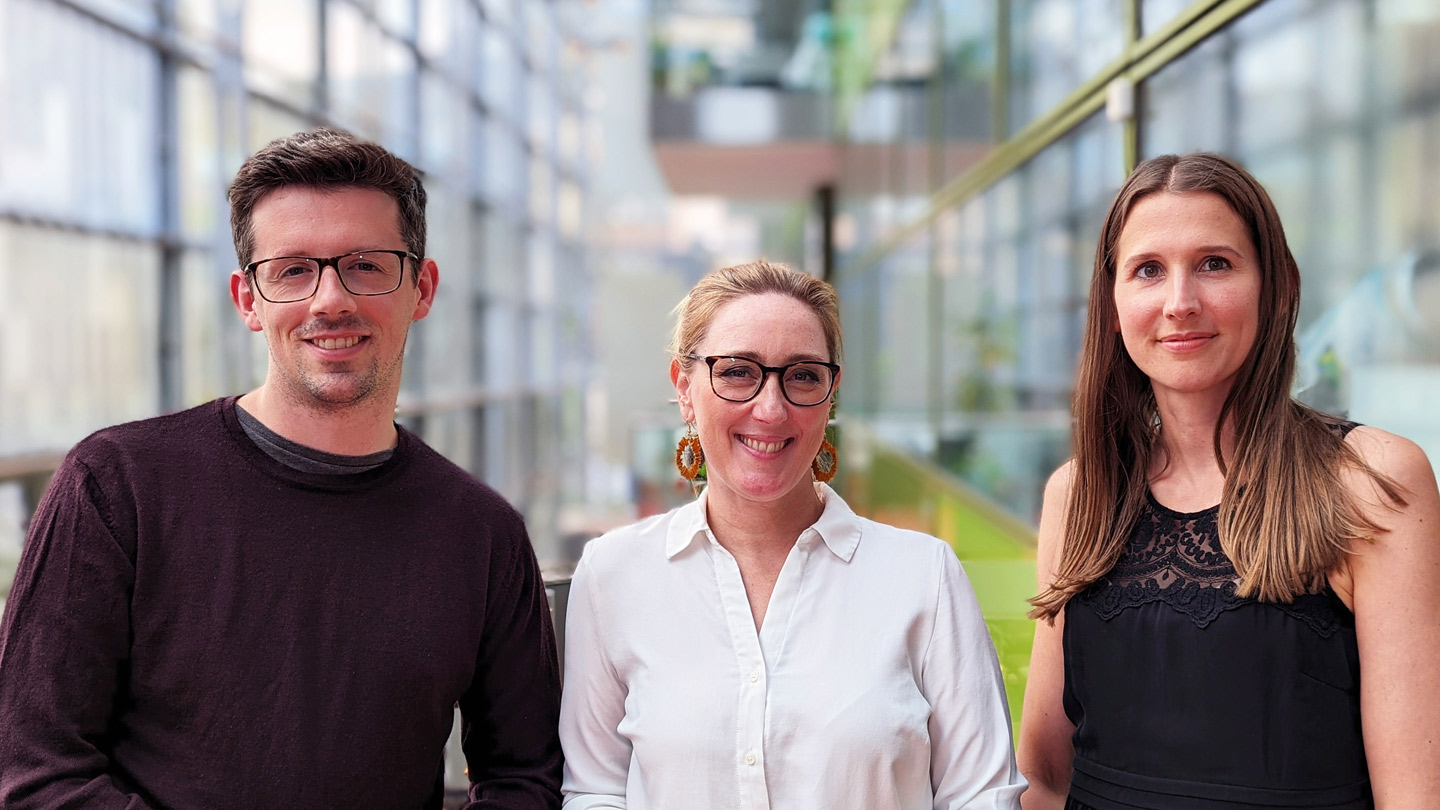 In their new study, Christopher Fell, Vanja Nagy, Astrid Hagelkruys made an important contribution to the understanding of the extracellular matrix in the brain and its associated neurological diseases. © IMBA of the OeAW

The extracellular matrix (ECM) is the tissue in the brain that surrounds cells in a meshwork-like manner to support and instruct brain function in that respective region. The ECM provides stability to brain cells to enable proper function, including long-term memory storage and makes up around a fifth of the brain volume. Until now, few cellular receptors for ECM signaling have been identified, but no association with a congenital neurological disease was made.

For the first time, researchers from two groups – Vanja Nagy’s group from the Ludwig Boltzmann Institute of Rare and Undiagnosed Diseases (LBI-RUD), the CeMM – Research Center for Molecular Medicine of the Austrian Academy of Sciences OeAW and Josef Penninger’s group from the University of British Columbia (UBC) and the IMBA – Institute of Molecular Biotechnology of the OeAW – have characterized FIBCD1, to be a receptor of the ECM ‘sugar’ components and linked it to a rare genetic neurological disease.

“Until now, we were only aware of FIBCD1 in an immunological context, and it had never been studied in the brain or in connection with our central nervous system function. FIBCD1 is highly expressed in the brain, and it binds to ‘sugar’. Since the brain ECM consists predominantly of ‘sugar’, we theorized that the receptor must contribute to brain function through ECM binding and/or signaling,” explains Vanja Nagy, the principal investigator of the study.

First authors Christopher Fell (LBI-RUD/CeMM/OeAW) and Astrid Hagelkruys (IMBA/OeAW) used knockdown fly and knockout mouse models, as well as a series of in silico and in vitro experiments, to demonstrate that FIBCD1 is indeed a receptor for ECM components in the brain. Their work confirmed that the absence of FIBCD1 can lead to nervous system disorders that affect behavior and cellular dysfunction in animal models.

“This allowed us to conclude that deleterious variants in FIBCD1 could also cause neurological disorders in humans,” Fell and Hagelkruys explained. This conclusion is also supported by the data from two young patients with neurodevelopmental symptoms, one from the United States and one from China, for whom no diagnosis could be made prior to characterization of FIBCD1’s expression and function in brain neurons.

The link between FIBCD1 and the brain raises many new questions

“We were already able to see in the animal models that the inactivation of FIBCD1 leads to massive neuronal functional perturbance,” Vanja Nagy explains. “In the affected patients, we determined that in both cases, the FIBCD1 variants identified are functionless – the binding to sugars does not work. We have therefore determined that this might be the possible underlining pathological mechanism in the disease of the patients.” Despite this fact, the symptoms of the two patients were remarkably different: while one of the patients had structural abnormalities in the brain, the other patient did not. “To be able to make a more concrete determination about the function of FIBCD1 in the human central nervous system, and what it can trigger if mutated, a much larger study cohort is needed,” Nagy added.

The study represents an enormous scientific milestone in several ways: on one hand, the identification and characterization of FIBCD1 in the brain has made an important contribution to our understanding of the ECM. On the other hand, it exemplifies the considerable level of collaboration that is needed to research rare diseases: a total of 29 experts from 24 institutions across 7 different countries collaborated to identify a new gene, FIBCD1, which was found to be likely responsible for neurodevelopmental symptoms in two unrelated patients from different countries. “The diagnosis of patients with rare diseases is not only of enormous importance to the affected individuals themselves. It also crucially contributes to a better understanding of the molecular connections in our bodies, the functions of our genes, and thus to the development of better therapies for many more common diseases,” says Nagy.