The time has come: On December 10, 2022, the quantum physicist Anton Zeilinger will receive the Nobel Prize in Physics – as the first Austrian since 1946!

Traditionally, the award ceremony takes place in Stockholm on the anniversary of the death of Alfred Nobel, the founder of the world’s most important science prizes.

The ceremony is followed worldwide. Be there too - here via the live stream!

Anton Zeilinger and his research activities:

Born in 1945 in Ried/Innkreis in Upper Austria, Anton Zeilinger studied physics and mathematics at the University of Vienna. After completing his dissertation in 1971, he was a Research Assistant at the Atominstitut in Vienna and then a Fulbright Fellow at the Neutron Diffraction Laboratory of the Massachusetts Institute of Technology (MIT). Back in Vienna, he habilitated in 1979 at the Vienna University of Technology.

Vienna was a special place. My supervisor Helmut Rauch (...) created a climate where you could do things. That was unusual and not often the case around the world: that you could just pursue your curiosity.” Anton Zeilinger, 2022.

Other positions and research stays took Anton Zeilinger to the Collége de France and Oxford University, among others. The focus of his research work was and is the phenomenon of quantum physical entanglement, the mysterious connection between two particles that assume an identical state regardless of their distance.

During the first experiments, I was asked what it was supposed to be good for. I answered proudly: it's not good for anything. I am just doing this out of curiosity because I have been completely fascinated by quantum physics from the start.”
Anton Zeilinger, 2022.

For his scientific breakthroughs in this field, he received numerous national and international awards and honors, including the Austrian Decoration for Science and Art, the Descartes Prize of the European Commission, the Isaac Newton Medal (UK), the Order Pour le Mérite, the Israeli Wolf Prize, the John Stewart Bell Prize and the Chinese Micius Prize. He is a member of several notable scientific academies such as the American Association for the Advancement of Science, the German National Academy of Sciences Leopoldina and the Chinese Academy of Sciences.

In 2003 Anton Zeilinger co-founded the Institute for Quantum Optics and Quantum Information (IQOQI) of the Austrian Academy of Sciences (OeAW), of which he has been a member since 1994. From 2004 to 2013 he headed the institute in Vienna before being elected President of the OeAW.

He was President of the Academy until 2022, while continuing to conduct quantum physics research that attracted a great deal of attention worldwide. Finally, in 2022, Anton Zeilinger was awarded the Nobel Prize in Physics for his scientific achievements. Heinz Faßmann, who succeeded the quantum physicist as President of the OeAW in July 2022, heartily congratulates Anton Zeilinger on the Nobel Prize: "It is the distinction for an uncompromising basic researcher who discovered the undiscovered and explained the previously unexplained."

Entanglement is one of the strange properties of quantum systems that cannot be described with classical theories. Albert Einstein once described the phenomenon as "spooky action at a distance" because two particles in a quantum-mechanical entanglement state remain connected to each other even across astronomical distances. When a measurement is carried out on one of the particles, the state of the other particle is also determined at the same moment. At first glance, this seems to violate one of the tenets of classical physics – namely that nothing can travel faster than light.

To get an idea of what entanglement is, we can imagine two dice. According to the rules of classical physics, it makes no difference whether we roll each die in its own cup or both in a common cup. The states are precisely defined at every moment and the two dice, independently of one another, deliver a number from one to six with a probability of one-sixth each.

A quantum die is a bit more complicated: if we shake such a die in a cup, its state is not well defined until we look. Before that, it is in a superposition of all possible outcomes. If we have two cups, each with one die, the results do not affect each other even in the quantum world. However, if we shake both dice in a cup, an entanglement occurs. If we then remove and separate the dice without reading their number, they remain entangled.

Due to the entanglement, the dice form a common quantum system, no matter how far we separate them before we read the number. Both dice are then in a common superposition state, which we can think of as a certain total number of points on the dice, for example 7. If I check the number of points on die A in Vienna and find a three, the state of die B in Beijing will also be defined simultaneously: it is a four. Each individual die then assumes an independently defined state and the entanglement ends.

A pair of quantum dice cannot be used to transmit information faster than light, even if the states are determined without a time delay. If the die in Vienna shows a three and that in Beijing a four, the dice throwers still need a classic communication channel limited to the speed of light to determine that the entangled total number is a seven, because it could have been a different value. So, you cannot choose what value you will have in Vienna to communicate a number to Beijing.

However, the phenomenon can still be used technically. Entangled photon pairs can be used to generate two identical random numbers for the two receivers. This can be used, for example, to generate uncrackable keys for cryptographic applications. Because a measurement on one of the photons destroys the entanglement, the receivers can always tell when a third party tries to read the key during transmission.

Quantum computers also rely on entanglement: a system of entangled qubits can use this superimposition of different combinations of bits to solve a difficult problem. In the future, quantum algorithms should also be able to solve problems that classic computers cannot cope with, such as the prime factorization of large numbers.

The road to the Nobel Prize 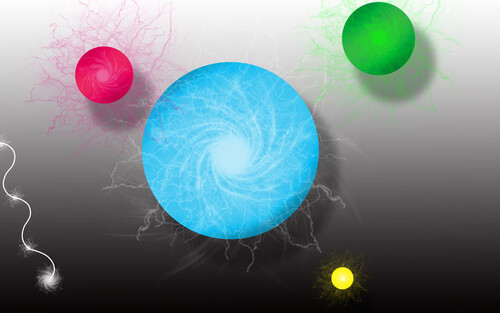 As the most important prerequisite for later experiments, Anton Zeilinger developed the "GHZ" experiment with Daniel Greenberger and Michael Horne: they proposed experiments with a state of three entangled quantum particles, with which they wanted to show the correctness of quantum mechanics. This was to be the proof of quantum entanglement, which Erwin Schrödinger had called the "essence of quantum physics".
1997

The year of Anton Zeilinger's first teleportation experiment: The exact quantum state of a particle A was transferred to a distant particle B - thus creating the experimental basis for further groundbreaking experiments.
1998

In 1998, entanglement between one pair of particles was transferred to another pair of particles for the first time - a scientific breakthrough that was also referred to when Anton Zeilinger was awarded the Nobel Prize in Physics in 2022.
1999 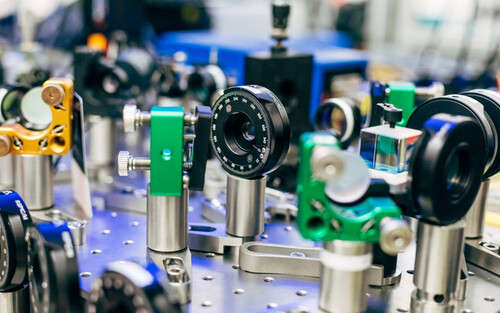 In 1999, the experimental proof of the "GHZ states" was also achieved - i.e., the successful practical implementation of the series of experiments developed ten years earlier.

The teleportation of entangled particles was also repeated outside the laboratory. So, "beaming" was achieved, i.e., the proof of the entanglement of two light particles over the entire distance between the Vienna Prater and the Danube Island.

Anton Zeilinger and his team were able to transmit entangled particles over ever-increasing distances. In 2010 more than 143 kilometers - between the Canary Islands La Palma and Tenerife! 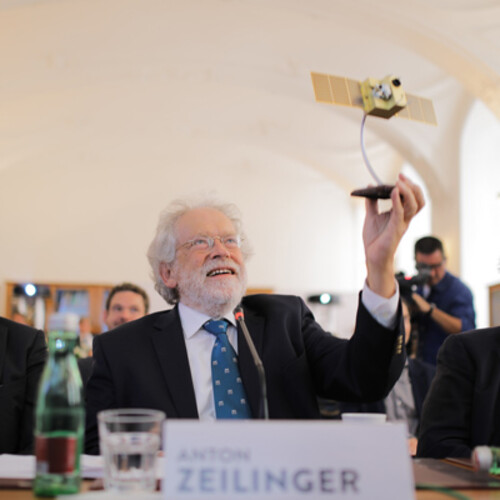 In a public experiment in 2017, the world's first "quantum phone call", a video call between Vienna and Beijing encrypted with quantum technology, was finally successful with the help of a satellite. The publicly organized experiment made headlines worldwide and made the enormous application potential of quantum technologies clear to the global public. 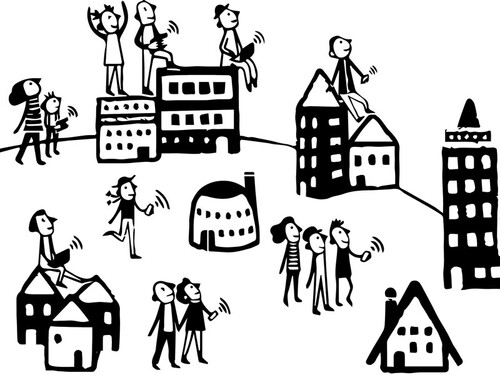 In the global online experiment "BIG Bell Test", more than 100,000 volunteers each made individual decisions between 0 and 1. This uncontrollable randomness from over 100,000 decisions eliminated the remaining theoretical possibility that quantum entanglement was only based on measurement errors and was not real. Albert Einstein's trivialization of entanglement as "spooky action at a distance" is finally history.