Molecular biologists from the OeAW found out how different types of repetitive DNA elements are controlled by the same silencing mechanism in fruit fly ovaries. A protein the researchers named “Kipferl” plays a decisive role in ensuring the effective control of jumping genes. Their findings are published in eLife. 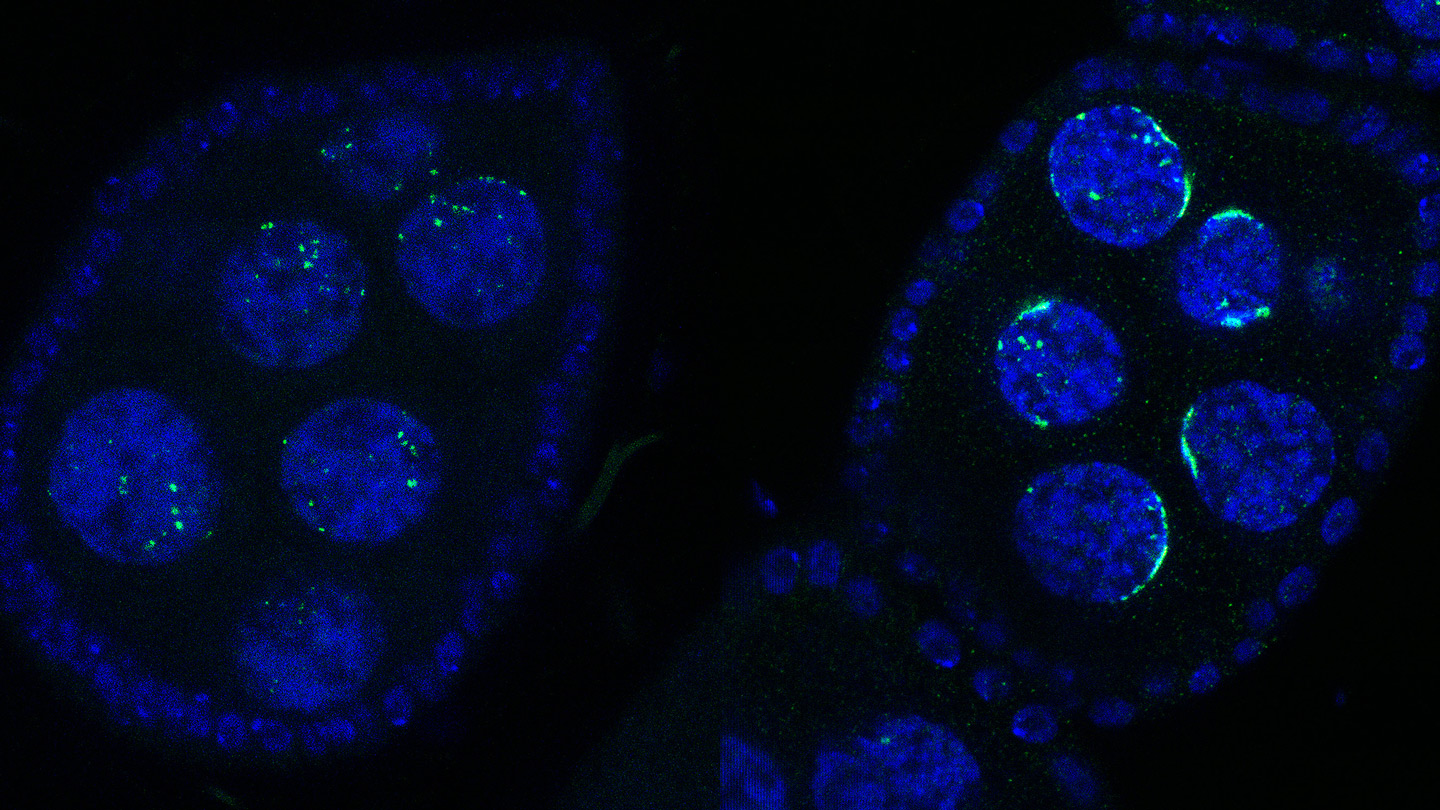 Rhino re-localizes to the pericentromeric Satellite arrays upon Kipferl mutation or deletion. Two Drosophila egg chambers containing several nuclei: Wild Type (left) or upon Kipferl inactivation (right). The DNA is shown in blue and Rhino in green. Upon mutation or deletion of the partner protein Kipferl (right), Rhino loses its affinity for the piRNA cluster sequences across the genome (green dots in the left panel) but is sequestered by the pericentromeric Satellite arrays (green crescent-like shapes in the right panel). The crescent shapes inspired the name “Kipferl”, the name of an Austrian pastry. ©Baumgartner/Brennecke/IMBA

A large part of our DNA is made up of selfish repetitive DNA elements, some of which can jump from one site in the genome to another, potentially damaging the genome. Researchers from the Institute of Molecular Biotechnology of the Austrian Academy of Sciences (IMBA) describe how different types of repetitive DNA elements are controlled by the same silencing mechanism in fruit fly ovaries. Central to their findings is an uncharacterized protein that the researchers named “Kipferl”, which ensures the effective control of jumping genes. The findings suggest that different selfish elements compete for the host genome defense system and that Kipferl might be the first of a series of similarly acting molecules yet to be uncovered.

About half of the human genome, and a fifth of the fruit fly genome, is composed of genetic parasites resembling genes that can make copies of themselves, and insert themselves into random areas of our genome, potentially disrupting normal gene expression. Multiple defense mechanisms have evolved to keep these so-called transposons in check. One such mechanism is an RNA interference system called the piRNA pathway. The piRNA pathway is a small RNA silencing pathway conserved throughout the animal kingdom, from sponges to mammals. This silencing mechanism uses piRNAs generated from transposon-rich sequences in the DNA called “piRNA clusters.” piRNAs are small RNAs that couple with so-called Argonaute proteins of the silencing machinery to target the transposons complementary to their sequence. Hence, these piRNAs serve as blueprints to identify and silence transposons with complementary sequences in the genome, no matter how far they were able to jump.

The fruit fly Drosophila melanogaster, in which the piRNA pathway was first identified, uses a protein called “Rhino” to find piRNA clusters in the genome. However, how Rhino recognizes the piRNA clusters in the DNA remained unknown. “Previous in vitro data had shown an affinity of Rhino for a specific epigenetic mark, the chromatin modification H3K9me3,” says IMBA group leader Julius Brennecke, the corresponding author of the study. This modification is a marker of “heterochromatin”, a form of tightly packed DNA in which genes are silenced. However, H3K9me3 is not specific to piRNA clusters but is also frequently found in other densely packed regions of the genome. There, H3K9me3 is bound by the main heterochromatin protein 1 (HP1), a close relative of Rhino. Why HP1 and Rhino bind to different subsets of heterochromatin, even though they both have a comparable affinity for the same chromatin modification, was long unclear. “Without a question, H3K9me3 was required, but not sufficient to explain Rhino’s binding to chromatin. Hence, we knew that there must be additional molecular cues that help target Rhino to piRNA clusters,” Brennecke adds.

In the search for this molecular cue, the team cataloged direct interactors of Rhino, looking for a partner protein that might be able to guide Rhino to piRNA clusters. Using a combination of genetic, genomic, and imaging approaches, the researchers identified Rhino’s “companion” in Drosophila ovaries: a protein containing several Zinc-finger folds that they called “Kipferl.” Kipferl does not only bind to Rhino but also uses its Zinc-fingers for the sequence-specific binding to guanosine-rich DNA motifs. The team found that most piRNA clusters are defined through the combination of Kipferl’s specific DNA binding sites with local heterochromatin. At these sites, Rhino’s interaction with H3K9me3 epigenetic marks is stabilized by Kipferl, which explains why Rhino only binds to a small part of all the heterochromatin found across the genome.

To add a level of complexity, the team knew that Rhino not only localizes to piRNA clusters. Recently Rhino had been shown to bind to so-called “Satellite arrays.” These are repetitive sequences of non-coding and non-transposing DNA located close to the chromosomes’ centromeres. “We saw a striking effect on Rhino when we generated flies with mutant or absent Kipferl and looked at them under the microscope,” says first author Lisa Baumgartner, a doctoral candidate in the Brennecke lab at IMBA. When Kipferl was mutated, Rhino no longer localized to the piRNA clusters across the genome. Instead, it strongly accumulated at genomic Satellite arrays. “Instead of smaller dots distributed around the nucleus, we saw Rhino forming distinct crescent-like shapes. Based on this very first observation, we named the new protein ‘Kipferl’, after a popular croissant-shaped Austrian pastry. We only found out much later that these structures corresponded to Mega-base stretches of Satellite arrays.” Hence, the scientists showed that Kipferl helped to properly distribute Rhino to piRNA clusters and avoid its sequestration to Satellite arrays.

Rhino is one of the fastest-evolving proteins in the fly genome. Brennecke and his team hypothesize that this fast evolution might well be due to positive evolutionary pressure coming from the Satellite arrays. “The Satellite arrays do not transpose but can recombine. However, if they do so in an uncontrolled manner, whole chromosome arms could be lost. Hence, the Satellite arrays might need a control mechanism involving Rhino and other piRNA pathway components to help package them into tight heterochromatin. This might be the reason why the Satellite arrays appear to want to sequester all the Rhino they could find,” explains Baumgartner.

piRNA pathway as the "enemy"

Baumgartner thinks that Rhino and the piRNA pathway might have very different roles in their interactions with the Satellite arrays or the piRNA clusters and transposons. “The jumping and multiplication of transposons pose a danger to the functionality of the genome, thus making it necessary that the piRNA pathway silences them,” she says. “Therefore, in the eyes of transposons, the piRNA pathway is the ‘enemy’ that prevents them from spreading through the genome. Satellite arrays, on the other hand, simply need an additional layer of control to ensure that they can maintain their high copy number without damaging the genome through unwanted recombination. Therefore, in the eyes of the Satellite arrays, I would imagine Rhino to be a factor that ensures their survival,” she elaborates.

Based on these observations and analyses, the scientists suggest that the Satellite arrays might be using another partner protein like Kipferl to help localize Rhino to their DNA. “To counter the sequestration of Rhino by the Satellite arrays, we speculate that Kipferl might have evolved out of a necessity to help retarget Rhino to the piRNA clusters. Hence, our findings suggest that Rhino might be caught in a crossfire of genetic conflicts,” says Brennecke. Furthermore, Rhino is expressed both in testes and ovaries in the fruit fly, while Kipferl is only expressed in ovaries. “Kipferl might be the first of several Rhino guidance factors yet to be uncovered,” concludes Brennecke.