HelioSwarm was selected as NASA's new Medium-Class Explorers (MIDEX) Mission in February 2022. The multi-satellite mission will help to better understand the interaction between the solar wind and Earth. HelioSwarm is a constellation or "swarm" of nine spacecraft that will make multipoint measurements in space. The mission is led by the University of New Hampshire (UNH).

The mission consists of nine spacecraft that orbit the Earth and are designed to study fluctuations in the Earth's magnetic field and movements of the solar wind, known as solar wind turbulence. Simultaneous measurements from different points in space are necessary to study this turbulence, as a single spacecraft would not be able to capture these complex phenomena.

HelioSwarm consists of a hub spacecraft and eight smaller satellites (see figure) which allows several combinations of measurements. The orbit is designed so that many orientations and different distances between the spacecraft are possible. This technical innovation offers a unique opportunity to study the turbulence and its evolution in the solar wind and thus uncover the physical processes responsible for the heating of charged particles in interplanetary space.

The IWF contributed to the mission concept for HelioSwarm and is part of the science team. A wave analysis method being developed at the IWF combines data from all nine satellites. This method can be used to determine what types of waves exist, in which directions they travel, and crucially, how they heat  and accelerate particles.

More information on HelioSwarm can be found in a press release from NASA and UNH. 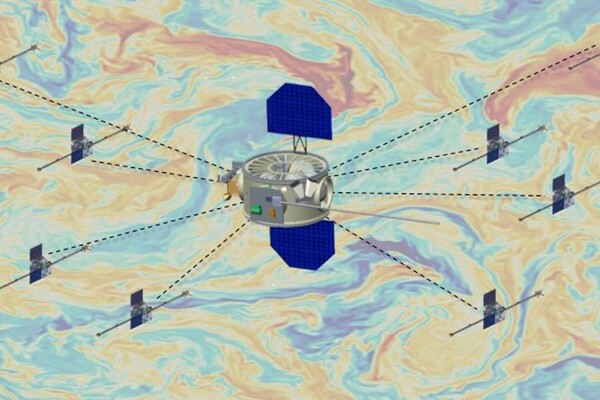