A team of physicists at the Universities of Vienna, Bristol, the Balearic Islands and at the Austrian Aacdeamy of Sciences has shown how quantum systems can simultaneously evolve along two opposite time arrows (forward and backward in time). The study has been published in the latest issue of Communications Physics. 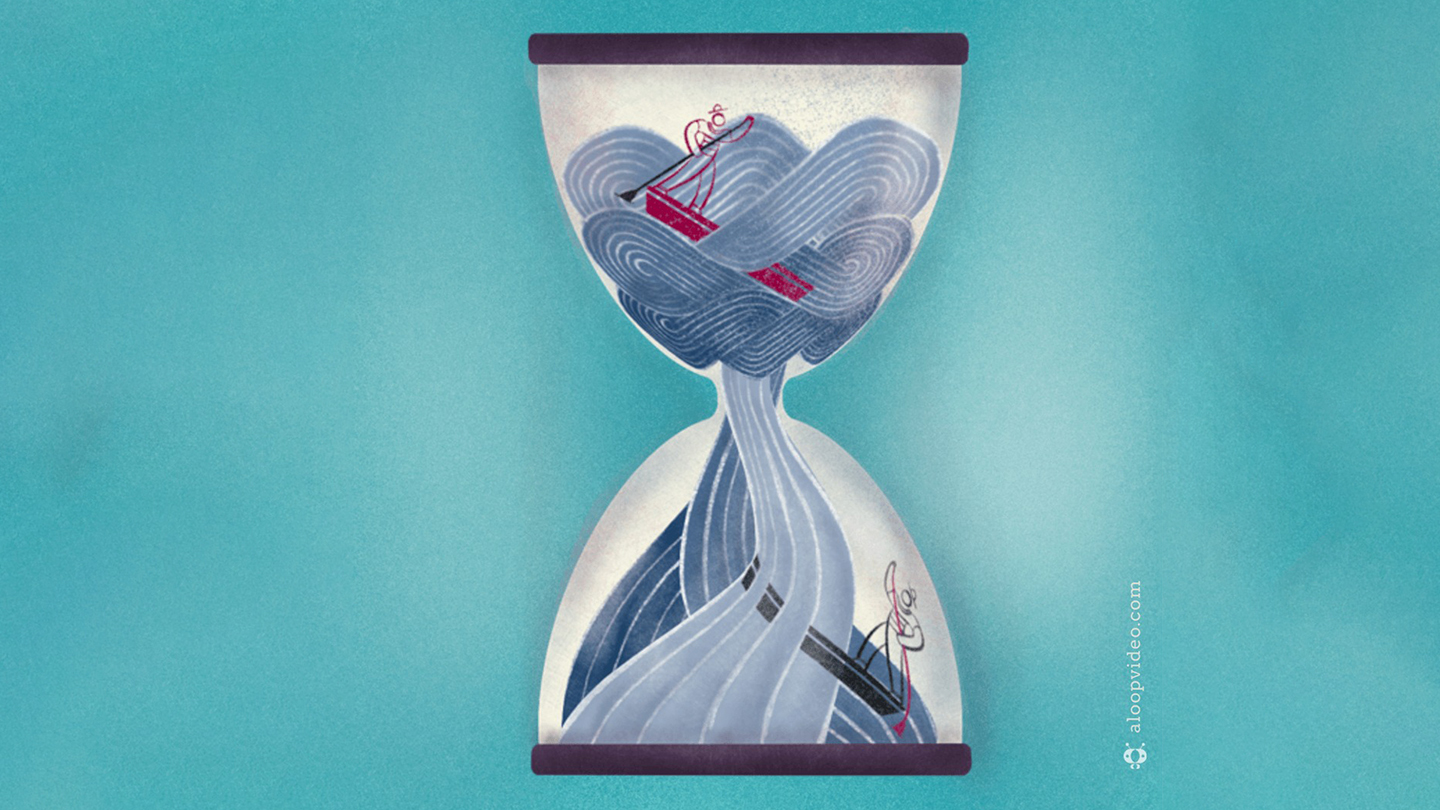 Artistic illustration of a gondolier trapped in a quantum superposition of time flows. © Aloop Visual & Science/University of Vienna/Austrian Academy of Sciences

When looking at the celestial motion, one often perceives a sense of eternity that could lead us to wonder whether time really exists after all. On the other hand, looking back at our daily lives extinguishes all doubts: time exists and moves forward. This apparent certainty comes from the fact that most macroscopic physical phenomena can only ever occur in one direction. Take the sequence of things we do in our morning routine, for example. If one were to show us our toothpaste moving from the toothbrush back into its tube, we would know without a doubt that they were just showing us the rewind of the recording of our day.

In physics, this propensity of certain phenomena to occur in only one time's direction is linked to their production of ‘entropy’, which is the physical quantity defining the amount of disorder in a system. In nature, processes tend to evolve spontaneously from states with less disorder to states with more disorder, and this propensity can be used to identify an arrow of time. Thus, if a phenomenon produces a large amount of entropy, observing its time-reversal is so improbable as to become essentially impossible.  However, when the entropy produced is small enough, there is a non-negligible probability of seeing the time-reversal of a phenomenon occur naturally.

Thinking back to the toothpaste example, if we were to squeeze the tube only gently and only a very small part of the toothpaste came out, it would not be so unlikely to observe it re-entering the tube, sucked in by the tube’s decompression. On the other hand, as the tube is squeezed with more strength, the toothpaste will spread out in an irreversible way, requiring a much greater effort if one were to put all it back in.

The boundary between forward and backward blurs in quantum mechanics

A team of physicists at the Universities of Vienna, Bristol, the Balearic Islands and at the Vienna Institute for Quantum Optics and Quantum Information of the Austrian Academy of Sciences (OeAW), under the lead of Časlav Brukner, has applied this idea to the quantum realm, seeking to gain a deeper understanding of how time flows in that regime. One of the peculiarities of the quantum world is the principle of quantum superposition, according to which if two states of a quantum system are both possible, then that system can also be in both states at the same time.
If we look back at the system evolving in one or the other temporal direction (the toothpaste coming out of or going back into the tube), it results that quantum systems can also find themselves evolving simultaneously along both temporal directions. Although this idea seems rather nonsensical when applied to our day-to-day experience, at its most fundamental level, the laws of the universe are based on quantum-mechanical principles. This begs the question of why we never encounter these superpositions of time flows in nature.

“In our work, we quantified the entropy produced by a system evolving in quantum superposition of processes with opposite time arrows. We found that this most often results in projecting the system onto a well-defined time’s direction, corresponding to the most likely process of the two” explains Gonzalo Manzano, a co-author of the study. And yet, when small amounts of entropy are involved (for instance, when there is so little toothpaste spilled that one could see it being reabsorbed into the tube), then one can physically observe the consequences of the system having evolved along the forward and backward temporal directions at the same time.
As pointed out by Giulia Rubino, lead-author of the publication, “although time is often treated as a continuously increasing parameter, our study shows that the laws governing its flow in quantum mechanical contexts are much more complex. This may suggest that we need to rethink the way we represent this quantity in all those contexts where quantum laws play a crucial role.”