OeAW and the Ministry of Science have finalized the new performance agreement – Academy will receive 428.5 million euros by 2023 – New research initiatives on metabolic diseases, quantum technologies, and anti-Semitism 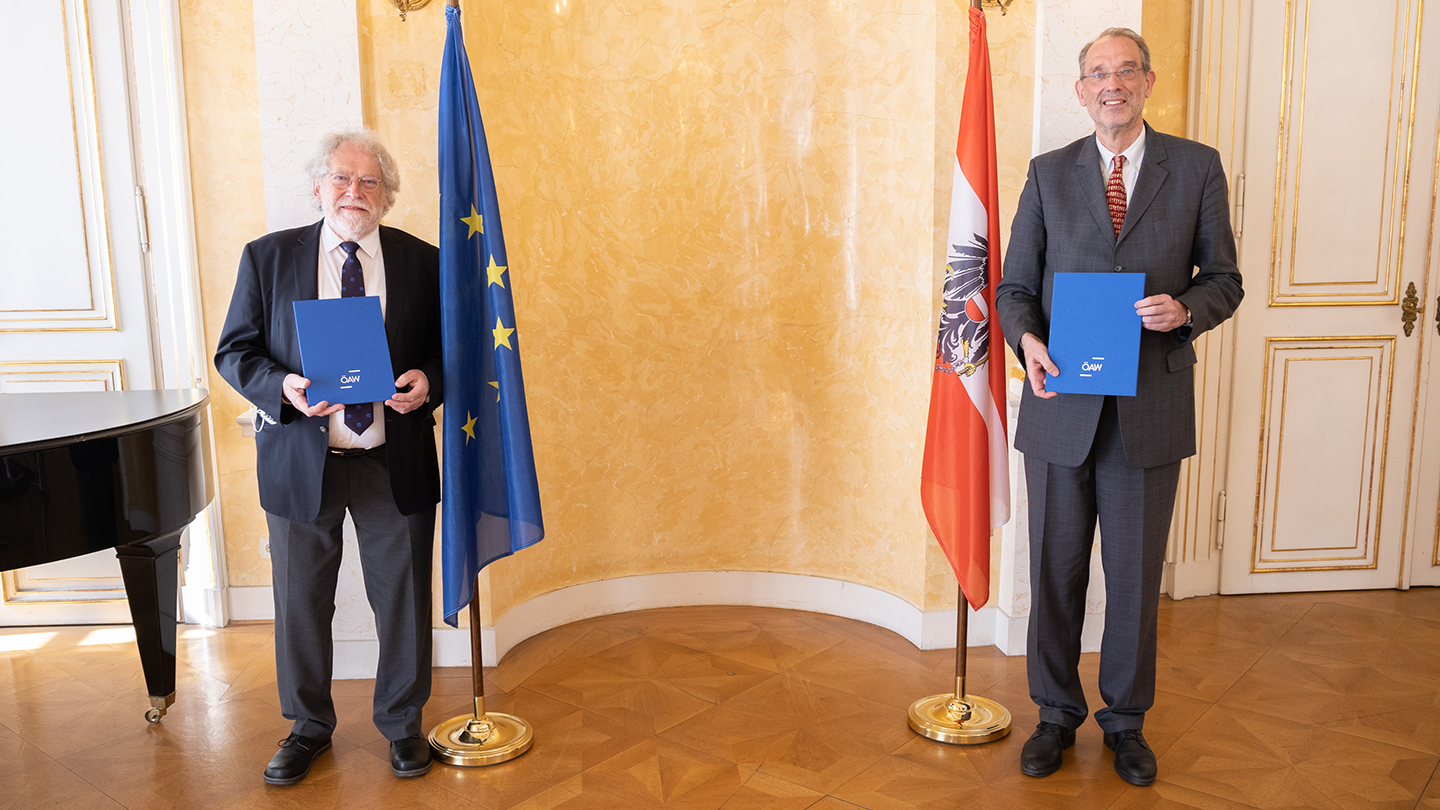 The new performance agreement for the years 2021 to 2023 was signed jointly by Science Minister Heinz Faßmann and OeAW President Anton Zeilinger on March 23, 2021. In total, the Austrian Academy of Sciences (OeAW) has around 428.5 million euros at its disposal for the years 2021 to 2023. This is an increase of 61 million euros compared to the previous three-year period. This ensures the continuation of innovative projects in the fields of quantum and stem cell research, which were previously financed separately by the ministry.

"With these additional funds, we want to establish new fields of research at the OeAW and invest in cutting-edge research," Federal Minister Heinz Faßmann sums up. "This is of central importance, especially in times of COVID-19 and the associated efforts to combat pandemics. The CeMM – Research Center for Molecular Medicine of the OeAW, for example, was able to put the first Austrian SARS-CoV-2 sequences online in April 2020. In addition, we are focusing on promoting young talent. Here we are investing 32 million euros in scholarships over the next three years."

"To move up the ranks of the innovation elite, we need cutting-edge research, but also the courage to systematically apply new topics and new methods. Year after year, the Academy shows impressively what effects application-oriented basic research can have if the creativity and curiosity of the researchers are given free rein," Faßmann continues. For the Federal Minister, the OeAW plays a key role when it comes to aligning with top international research: "The Academy is a guarantee for the efficient and output-oriented use of the funds made available. The Academy is also very successful on a European level in obtaining ERC grants. The approval rates clearly show that the OeAW is one of the best research institutions in Europe in this regard," Faßmann concludes.

"Outstanding basic research needs the courage to take risks and, above all, freedom so that something completely new can originate," OeAW President Anton Zeilinger emphasizes. "The OeAW is such a space in which the best minds work on research for the future with curiosity and creativity. This basic research has produced, for example, essential know-how that is now being used in the COVID crisis. The performance agreement for the years 2021 to 2023 will provide new impetus; for example, an institute for research into metabolic diseases, work on quantum technologies, and research into anti-Semitism in the present," Zeilinger continues.

The new performance agreement will also enable the OeAW to increase its efforts in promoting young scientists over the next three years. Focal points in basic research on digitalization and sustainability, linguistic diversity, and research into SARS-CoV-2 will be established. New research institutions are planned for the fields of anti-Semitism and metabolic diseases.

In addition to the continuation of the existing 25 institutes of the Academy, the Cori Institute for Metabolism Research is to be created in Graz. It is named after the Austrian-American biochemist and Nobel Prize winner Gerty Theresa Cori (1896-1957) and will be operated in conjunction with the three universities in Graz. The close interweaving of experimental with numerical biology and mathematical modeling in the research of human metabolism and metabolic diseases is a unique selling point in Austria and in the German-speaking world. In addition, the Cori Institute will offer talented young scientists an excellent environment in Graz.

The "development of a holistic strategy to prevent and combat all forms of anti-Semitism" is laid down in the current government program for 2020-2024. This also includes a scientific examination of the topic. The OeAW will therefore found a center for anti-Semitism research in 2021 and expand it step by step. The focus will be on interdisciplinary basic research on the causes, manifestations, and effects of anti-Semitism, anti-Judaism, and anti-Zionism in Austria and in Europe today.

To further expand Austria's leading international position in quantum physics basic research, cooperation with the Chinese Academy of Sciences, an already important partner institution, is to be strengthened. A "Quantum Physics Hub" is intended to enable longer research stays in China for quantum physicists working in Austria, and vice versa. The establishment of joint working groups on pioneering research fields, such as satellite-based quantum networks, is also conceivable within the framework of the hub.

Knowledge transfer and research on SARS-CoV-2, digitalization, and climate

Since the outbreak of the corona pandemic in Austria, the Academy's institutes have dealt intensively with the coronavirus and its consequences for health, society, and the economy. There are currently more than 43 research projects on SARS-CoV-2; for example, on the mutations of the virus, herd immunity in the population, and what past epidemics can teach us about the current one. Through this, the Academy aims to help overcome this global challenge in the short- and mid-term, and to create knowledge on how to deal with the long-term effects of the crisis.

The corona crisis has given the advancing digitalization of all areas of society and life a strong boost. The OeAW will highlight the opportunities and risks of this rapid change with a new and diverse series of public events. The "Colloquium Digitale" starts in 2021 and will include webinars, workshops, lectures, and panel discussions. Another new series of events is dedicated to the topic of "sustainability" and deals, for example, with the question of what happens if the climate targets are not achieved. The Academy will also be involved in advising politicians. The next event in the "Science and Politics in Conversation" series, where researchers and members of parliament exchange ideas in a roundtable format every six months, will focus on climate change. Finally, a "day of multilingualism" will raise public awareness of Europe's linguistic diversity and its preservation.

Bringing "brain power" to Austria and opening of the Campus Academy

To attract the best minds to Austria and to keep "brain power" in the country, the OeAW is starting another funding initiative in addition to its established programs for doctoral students and postdocs. With specially established "Seal of Excellence Fellowships", applications for Starting Grants from the European Research Council (ERC) or for Marie Skłodowska Curie fellowships that are rated outstanding, but that cannot be funded by the EU for budgetary reasons, are to be supported by the Academy. For very early-career talents, the Academy's Studienstiftung will be continued and expanded. In addition, as a contribution to strengthening the next generation of women in mathematics and science, the OeAW will launch a relevant award for the three best pre-university papers by high-school graduates.

For high-quality basic research at an internationally competitive level, a modern working environment with contemporary infrastructure is essential. With the renovation and modernization project "Campus Academy", which is in full swing, the OeAW will, during the current performance agreement period, create a place for science as well as for exchange with the public, in the center of Vienna.

A milestone will be reached in the summer of 2021 with the re-opening of the refurbished main building of the OeAW at Dr. Ignaz Seipel-Platz in the first district of Vienna. The opening of the Campus Academy with its centerpiece, the sections between Postgasse and Bäckerstrasse and the revitalized former Jesuit library, will be celebrated with the Viennese population in summer 2022. Finally, by 2025, more OeAW locations in Vienna are to be merged in the Postsparkasse designed by Otto Wagner. As a result, a science mile will emerge in the coming years in the heart of the capital, which will spur interdisciplinary and interinstitutional research and further enliven Vienna's inner city with events.