When a particle is completely isolated from its environment, the laws of quantum physics begin to play a significant role. An important condition for observing quantum effects is to reduce the thermal energy of motion, that is, to cool it as close as possible to absolute zero. Scientists from the Austrian Academy of Sciences, the University of Vienna, and the Massachusetts Institute of Technology (MIT) have come one step closer to this goal by demonstrating a new method for cooling nanoparticles in experiments. They have now published their results in the journal Physical Review Letters. 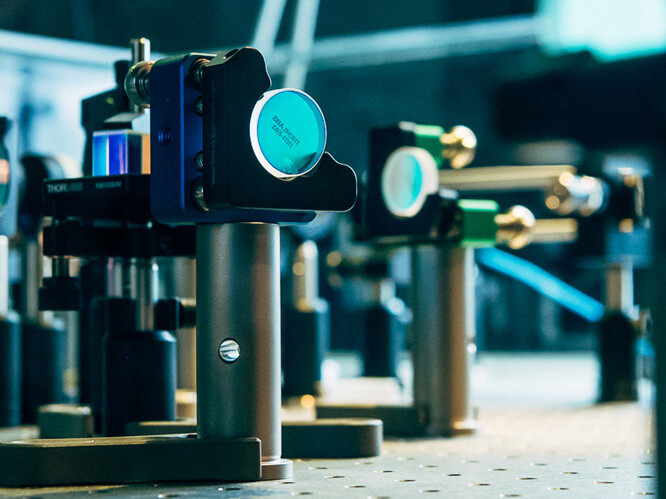 Highly focused lasers can serve as "optical tweezers" to capture and manipulate tiny objects, from glass particles to living cells. Arthur Ashkin was awarded last year's Nobel Prize in Physics for the development of this method. While most experiments are carried out in air or liquids, there is currently growing interest in keeping objects under ultra-high vacuum with optical tweezers. Such isolated particles not only display unprecedented quality as sensors, but can also be used to investigate basic processes of engines at the nanoscale or quantum phenomena with large dimensions.

An essential part of this research is to gain unrestricted control over the movement of the particle, ideally in a regime where the laws of quantum physics dictate its behavior. Earlier attempts to achieve this either modulated the optical tweezers themselves or exposed the particle to an additional light field between two highly reflective mirrors, a so-called optical cavity. The high laser intensity and laser phase noise pose major challenges for these methods. "Our new cooling scheme is directly adopted from the field of nuclear physics, where similar challenges for quantum control exist", says Uros Delic, first author of the publication in Physical Review Letters, which resulted from a collaboration, led by Markus Aspelmeyer, between scientists from the University of Vienna, the Austrian Academy of Sciences and the Massachusetts Institute of Technology (MIT).

The idea originally came from the Innsbruck physicist Helmut Ritsch and the US physicists Vladan Vuletic and Steve Chu, who realized that it was sufficient to use light that is scattered from the optical tweezers themselves. For this, the particle simply has to be held in an initially empty optical cavity.

A nanoparticle in optical tweezers scatters a tiny portion of the light in almost all directions. If the particle is in an optical cavity, some of the scattered light may be trapped between its mirrors. As a result, the light is preferably scattered into the optical cavity. However, this is only possible for certain colors, or in other words, for certain photon energies. If light with a slightly smaller photon energy than necessary is used for the optical trap, the nanoparticle will "sacrifice" a little of its kinetic energy to allow scattering into the optical cavity. The loss of kinetic energy ultimately leads to cooling of the particle motion. The method was previously demonstrated by Vladan Vuletic, a co-author of this work. Here, however, it was used for nanoparticles for the first time and to cool movement in all three dimensions.

"Our cooling method is far more powerful than previous approaches, and without the limitations of laser noise and laser power, there's nothing to stop us from observing quantum effects with levitated nanoparticles", Delic says.

Institute for Quantum Optics and Quantum Information of the OeAW