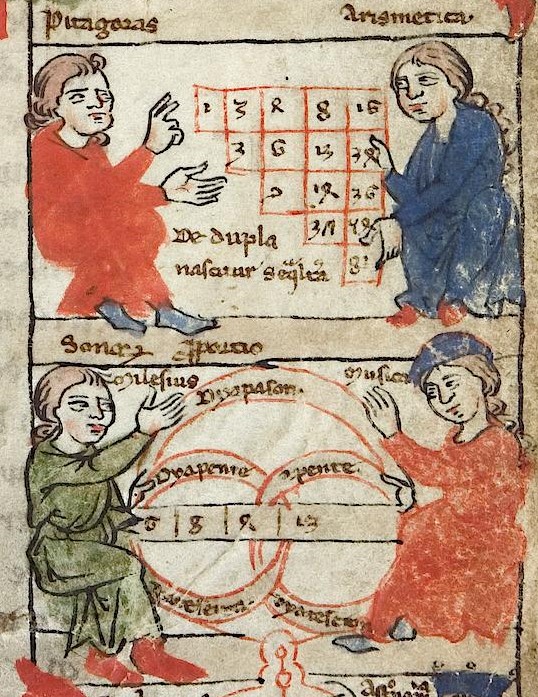 Trying to find out when the Hindu-Arabic numerals – and especially the Zero – were first used in the German speaking world, sounds a lot easier than it actually is. On the one hand the answer is pretty straightforward: In the middle of the 13th century we can already find illustrations, in a didactic but nevertheless literary text, with Hindu-Arabic numerals in the context of the Seven Liberal Arts. Thomasin von Zerclaere, a young Italian monk writes his “Der Welsche Gast”1  (“The Italian guest”) for a German audience, intended for the education of young people from noble backgrounds. But Thomasin never explicitly writes about numbers or mathematics, we only see the numerals in two illustrations without any explanation whatsoever. This leaves the question of whether the reader or spectator of the manuscript, who at that time was very likely still used to Roman numerals, was able to decipher and understand the illustration.

After this first appearance, finding further references to Hindu-Arabic numerals in German texts becomes difficult. German textbooks on mathematics only start to appear around 1400, although the first Latin translations of Arabic textbooks on the new method of calculation can be dated to the 12th century. They teach about the nine numbers and the one symbol – today known as Zero – that by itself does not signify anything. Those texts were soon known as “Algorisms” after the Arab mathematician Muhammad al-Chwarizmi, who wrote the first treatise on the new numbers in the 9th century. In one of the most popular translations, produced by John of Holywood, the Zero is introduced as: “[…] theta vel circulus vel cifra, vel figura nihili, quoniam nihil significat”.3 Theta refers to the Greek letter that looks almost like a Zero4, the “circulus” also describes the shape of the Zero as a simple circle. “Cifra” refers to the Arabic word “as-sifr”, meaning “emptiness” or “void”.5  The number of nothing which signifies nothing is an explanation of what the number Zero does. German translations of the early 15th century adapt this wording and speak of the “theta”, the “ziffer”, or the “niht” – the nothing. Different terms were used simultaneously for a long time, but eventually “ziffer” stuck and was soon not only used to refer to the Zero, but also to the hindu-arabic numerals in general.

The descriptive nature of some of these names for the Zero helps to memorize not only the symbol but also its function: The circle as a ring that encloses an empty space signifies the Zero’s role as a placeholder. Nowadays we are so used to our numerals, that it is hard to imagine not being able to read and therefore understand them. But in the Middle Ages and the early modern period it might have been difficult to make sense of them, especially in a vernacular environment. Scholarship agrees, that already by around 1300 teaching Arithmetic meant to teach the Algorism, but only in an academic – and therefore Latin – setting at universities or in monasteries. Teaching this kind of mathematics in German only started to become popular in the late 15th century with the arrival of the German “Rechenmeister”.

The resulting struggle to understand what the Hindu-Arabic numerals meant and how to read them can be shown via a simple mnemonic, which pops up in at least 15 manuscripts and fragments from the 14th to the 16th century. I want to address three of them6:

To memorize the shape of the numerals they are described through their resemblance to objects in a mixture of German and Latin: “The finger gives the one, the bridge shows two, the pigtail gives the three. But the wreath of sausage signifies the 4. The stick gives the five. The ram gives the six, seven the truss. The chain gives the eight but the club signifies the nine. The little circle with the finger shows you the ten.”
In addition to the text a fragment from the monastery Kremsmünster dated to the 15th century also shows the actual numerals, which are placed above their German descriptions. This text varies from the Dresden manuscript and is also a little shorter:

Here the number two is not signified by a bridge, but instead by a crotch, the five is compared to a very specific rack of sticks used to carry heavy burdens and the seven – which itself is not mentioned in the text – is described as sleigh or a rack resembling a sleigh.

The names of the nine figures are given in Latin and connected to a German expression, while drawing on similarities between the shape of the numerals and the objects of comparison. The Zero stands out, because we do not have a Latin equivalent; the German expression is not used as a simile but stands by itself, therefore not functioning as a mnemonic template but as an actual term.

The short mnemonic shows that remembering the shape of the numerals was less trivial than we think it is. Even though the objects of reference can shift, they stem from the sphere of everyday life and are located in a rural setting, posing the questions of whether every reader would know these objects and, therefore, who the addressees of this short text were. This corresponds with the language: The main body of the text is written in Latin but the vocabulary used is very basic. The important terms that really need to be understood in order to learn about the Hindu-Arabic numerals are inserted in German. The goal could be unambiguous comprehension even for readers or listeners who are not yet adept Latinists like younger students. Whether the objects of comparison employed differ because of a changed frame of reference or because of ambiguities arising during the process of remembering or copying the text, is hard to say.

What becomes clear though is, that memory aids like this one were needed in order to grasp the Hindu-Arabic numerals, to recall their uncommon shapes and gain confidence in using them. Only then can the actual study of mathematics begin – a totally different struggle that is still shared by students everywhere who have no problems reading these numerals at all.

4 Sometimes we also read the word „theca“, which is interpreted a little differently. Karl Menninger reads it as the burning mark shaped like a circle that criminals in the Middle Ages got marked with either on their forehead or their cheeks (Menninger, Karl: Zahlwort und Ziffer. Eine Kulturgeschichte der Zahl. Göttingen: Vandenhoeck & Ruprecht 31979, p. 217); Kaplan refers to the Greek word “theca” and translates it as a vessel or a container (Kaplan, Robert: Die Geschichte der Null. Frankfurt/New York: Campus 2000, p. 78).

8 The fragment is discussed in the forthcoming book by Jackel (see above).