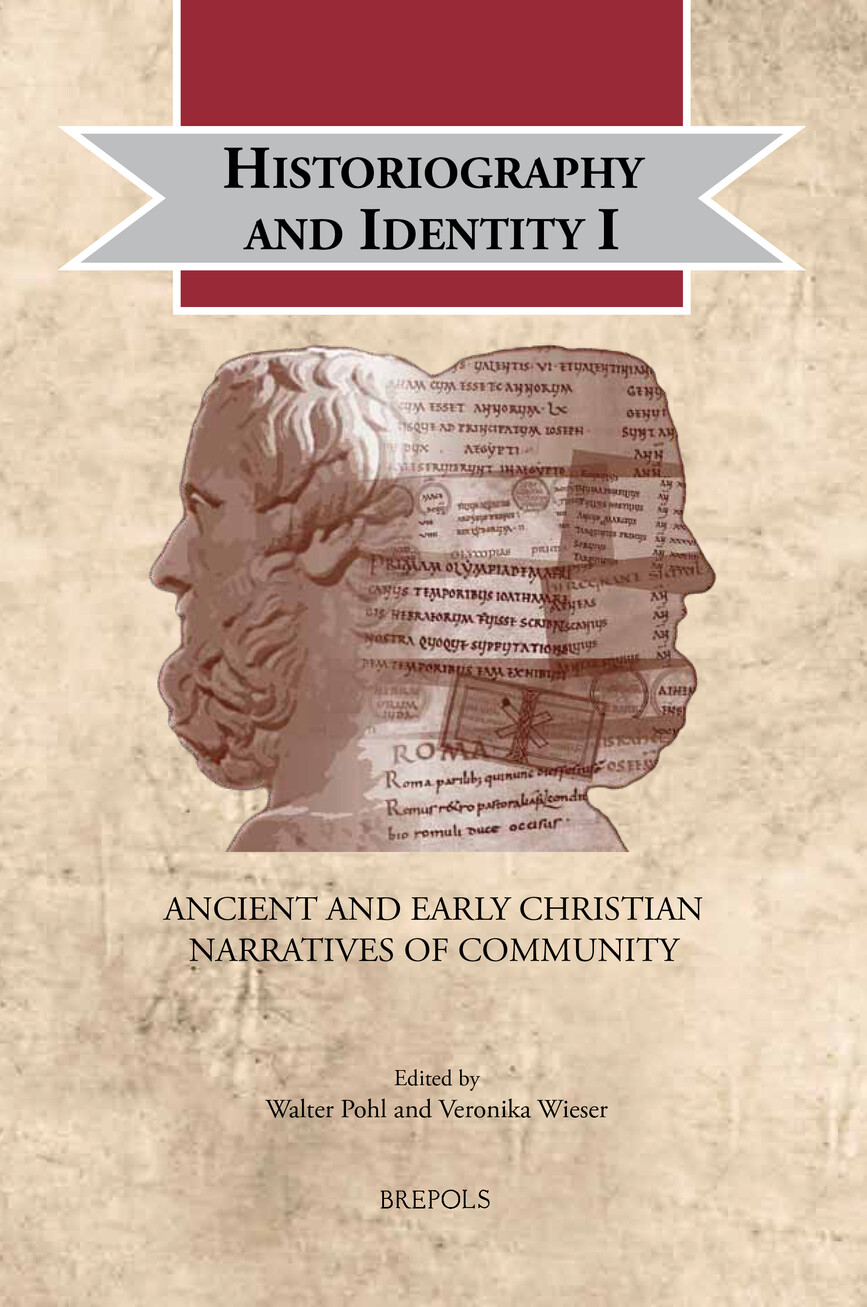 We are happy to announce that the first volume of our Historiography and Identity series, entitled Ancient and Early Christian Narratives of Community, has been published with Brepols this September. Historiography and Identity examines the many ways that historiographical works shaped identities in ancient and medieval societies. The first volume, in a series of six, starts with the historians of ancient Greece and the late Roman Empire. The aim of the series is to examine under what conditions, how, and to what extent historical narratives can help to shape identities or create a sense of community. More than 85 in-depth case studies connect different historical cultures which influenced history writing from the Latin West to the emerging polities in Northern and Eastern Europe, presenting Eurasian perspective which includes China and the Islamic World. The contributions explore how history writing could create a sense of community, thereby shedding light on the links between authorial strategies, processes of identification and cultural memory. This approach brings together two central questions: 1) the nature of historical writing and 2) the development of social identities and communities within changing political landscapes.

As Walter Pohl argues in the introductory article, more attention needs to be paid to the very different ways in which the writing of history was related to notions of identity and community in specific works, and in various contexts. This is what the present series engages with, by bringing together a wide variety of case-studies and by expanding the geographical scope from ancient and medieval Europe to the Mediterranean world, the Near East and Asia. It aims to highlight the complexities of history writing with regard to the role of regional, ethnic, cultural and imperial identities. Identity is, of course, a ‘loaded term’. In his introduction, Pohl addresses the question of why we think it can be productive to use it. In any case, the concept of ‘identity’ is only meaningful if we can reasonably specify where, how, and to what extent identities mattered in works of historiography. The title of this series Historiography and Identity should therefore be understood as a question, not as an answer.

While providing the reader with an unparalleled wealth of information, the planned six volumes testify also to the ongoing efforts to address the theoretical and methodological challenges of dealing with ancient/medieval historiography, its categories and significance, as well as to develop the tools and reflect on the grand narratives available for its analysis. Our aim is to develop a critical methodology – distinctions, criteria, models, and research experiences that may help to harness the potential of identity studies to add to our understanding of the construction and impact of historiography.

Although the main focus of the series lies in the medieval period, the first volume examines ancient historiography in order to discuss ancient precedents, models and cases for comparison. It raises several questions that will recur in the later volumes: What is the relationship between historiography and cultural memory? What were the links between urban (or regional) allegiances and broader ethnic, cultural or imperial identities? And how were the models of Christian historiography developed, which would eventually shape medieval historiography?
In his introductory article on the development of Greek and Roman history writing, Nino Luraghi examines the complex relationship between historians and their communities, and he shows how ancient historiography provided models for establishing relations between historical narrative and concepts of communities.

The different visions of religious identity of early medieval authors before the background of an ongoing transformation of the political landscape in Europe, are the topics of Hans-Werner Goetz’s article. Especially in the process of the Christianization of the late Roman Empire and the Barbarian successor kingdoms, religious identity became a complex topic. Examining the Histories of Gregory of Tours more closely, Goetzargues that Gregory’s perception of other religions helps to understand his own complex, religious identity better and also shows how differently religious identity was perceived then in comparison to our own modern conceptions.

The past in classical and post-classical Greece was not only told and shaped through historiographical works but also transmitted through other media, such as poems and their public performance, inscriptions, monuments, epideictic speeches, or plays. This is what Hans-Joachim Gehrke calls ‘intentional history’. In his article he emphasizes the important role that the social framework of historiography played in creating collective identity, in particular the role of its agents – the producers and recipients of intentional history, and its social constellations. As Nino Luraghi observes in his contribution, there is a tension between these two levels of cultural memory, between ‘intentional history’ and historiography. Luraghi analyses Athenian practices of intentional history, such as honorific inscriptions and monuments, in relation to the historiography about its rulers, the Antigonids, in a period of political discontinuity, and shows how the manipulation of monumental memory was as a way of coping with present circumstances.

Andrew Feldherr’s contribution on Roman historiography adds the topic of pleasure – both the pleasure of the reader and the thematization of pleasure within narratives – to the analysis, examining the complex political work done in the writings of Livy, Sallust or Tacitus. Thinking about pleasure can also contribute to understanding how historiography constructs its readers’ places within the community.

Daniel Tober zooms in on the antique local Greek history of Samos and its times of changing fortunes, as seen through the lens of Joseph Georgirenes, the 16th-century bishop of Samos and Icaria. Times of crisis could be a strong motivation for history writing. The bishop shaped the Samian past through shared cultural memory and local historiography.

Eusebius of Caesarea’s works, his Church History and the Chronicle, and especially his experiments with design and order for representing a Christian-Roman past, became a paradigm in Christian thinking about history. Scott Johnson closely examines Eusebius’ use of lists of emperors, bishops and writers’ of literary works. He argues that these lists were used as tools for organizing the perception and passage of time and the history of church communities. In particular, bishops and their offices were regarded as standing in direct continuation of the apostolic succession, and were therefore important cornerstones of the universal church. Around the end of the fourth century and beginning of the fifth, Christian history writing was flourishing as a wider group of late Roman Christian theologians and historians followed in Eusebius’ footsteps and continued his Christian interpretation of history, appropriating the Roman Empire’s past as part of the history of Christianity. In his continuation of Eusebius’ Chronicle, one the most influential scholars of this age, the theologian and bible-translator Jerome used history writing to establish images of orthodoxy and heresy between the followers of the Arian and the Nicene creed.

In her contribution, Madeline McMahon compares Eusebius’ and Jerome’s different visions of time and history, and the individual polemical motivations behind their works. While Jerome’s continuation of Eusebius’ Chronicle became a benchmark for later Christian historiographies, the work of his contemporary Sulpicius Severus did not receive much attention. In her article, Veronika Wieser presents an in-depth study of this chronicle, Sulpicius’ work as a historian and his social context in order to get to a better understanding of the varieties of late antique Christian history writing. In particular, Sulpicius’ use of the biblical past and his ideas about the approaching end of the world, created new, alternative ideas of authority, political and ascetic leadership. Finally, with Peter van Nuffelen’s contribution, Constantinople and the late antique Eastern Roman Empire come into focus, in particular its local church communities where fierce controversies over orthodox belief were carried out. Examining the church histories of Socrates, Sozomen and Theodoret more closely, van Nuffelen shows how local communities and local episcopal sees were considered to be incarnations of the Christian church. Therefore, local context is key to understanding universal church histories.

Historiography and Identity I, Table of Contents

Planned volumes of the series (all Turnhout: Brepols, forthcoming):

Historiography and Identity 4: The Writing of History across Medieval Eurasia, ed. by Walter Pohl and Daniel Mahoney.

Historiography and Identity 5: The Emergence of New Peoples and Polities, 1000–1300, ed. by Walter Pohl and Francesco Borri.

The project from which this series of volumes originated was part of the research cluster ‘Visions of Community: Comparative Approaches to Ethnicity, Region and Empire in Christianity, Islam and Buddhism (400–1600 CE) (VISCOM)’, funded by the Austrian Research Fund (FWF).