Despite all recent progress, cancer remains one of the deadliest human diseases. In a new publication that appeared in the journal Cell, researchers from Jürgen Knoblich's lab at IMBA – Institute of Molecular Biotechnology of the Austrian Academy of Sciences – found a very surprising and unexpected connection between the formation of tumors and mitochondria, the power house of the cells, that allows neural stem cells that normally build our brain to become deadly tumor cells. 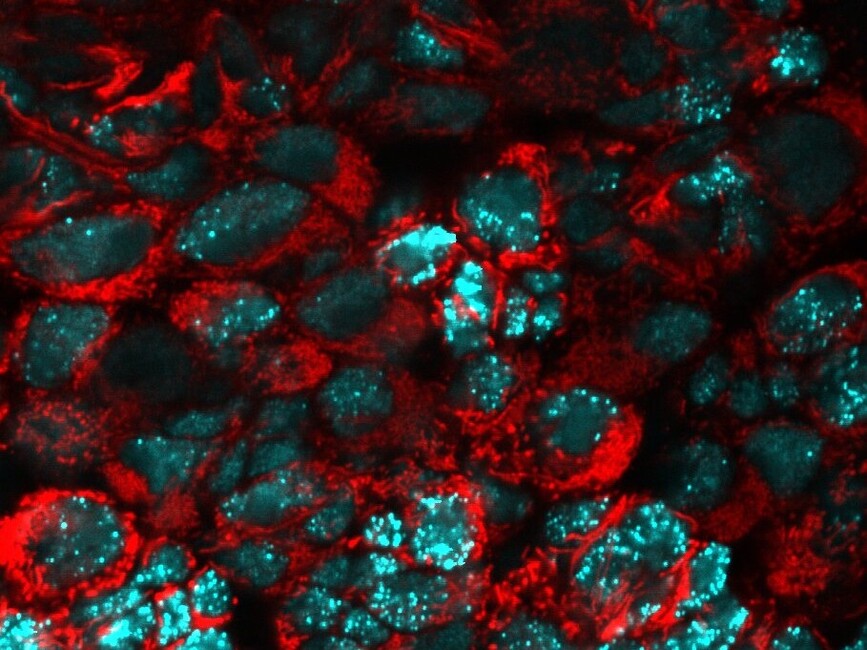 Worldwide, cancer is the second leading cause of death – in 2018 alone, it claimed approximately 9.6 million lives, or one in six deaths. The development of cancer is incredibly complex and is controlled by an interplay of various factors – only recently, it became clear that the majority of human cancers such as cervical, gastrointestinal and breast among others, originate from adult stem cells becoming deregulated. These adult stem cells are present in many of our organs, where they provide a constant supply of cells to replace old and dead cells. Identifying the mechanisms of how these developmentally tightly regulated stem cells break free from their regulations is an important topic within the scientific community, including the Knoblich lab at IMBA.
One key step in tumorigenesis are the mechanics driving tumor cell initiation, which trigger their fate in becoming tumorigenic. They have, thus far, mainly been studied at gene regulation levels, by researching tumor suppressor genes MYC, p53 or KRAS. Metabolic changes within tumor cells are a well-known characteristic, but whether these are a consequence or the cause of tumor cell immortalization is still not known, and thus the focus of the most recent publication from Knoblich’s team.

The researchers chose the fruit fly Drosophila melanogaster as tumor model – this established yet somewhat unconventional model organism boasts a long history in tumor studies, with discoveries in mutations of tumor suppressor genes dating back to the 1970s. Learnings from this simple model organism can then be used as a powerful tool as basis for further studies on human genes. In Drosophila, the scientists visualized the exact timepoint when tumor initiating cells became immortal and manipulated the process genetically – a feat which is not readily accomplished in mammalian tumors, due to their high complexity.
“We used a Drosophila neural stem cell (NSCs) tumor model, which is induced by the depletion of the well-known tumor suppressor called Brat. By using this model, we investigated whether the metabolism plays an active role in Brat tumor cell immortalization. Our findings in Drosophila will then be used as a basis for subsequent studies in human cells and lay the basis for mechanistic studies of human cancers,” explains Jürgen Knoblich, IMBA group leader and Scientific Director.
Indeed, the researchers found Brat tumors to be highly oxidative, with higher oxygen consumption rates compared to normal brains. This proved to be quite the surprising discovery, as tumors are widely considered to be glycolytic.
In an additional exciting finding, the scientists from Knoblich’s team found that the oxidative metabolism, which is a mitochondrial oxygen-dependent bioenergetic pathway, plays a key role in tumor cell immortalization. “We noticed that during tumor initiation, the mitochondrial membranes are fused. This drastic change in mitochondrial morphology leads to an increase in efficiency in oxidative phosphorylation, which explains why we found increased levels of NAD+ and NADH, two key molecules involved in bioenergetics,” explains François Bonnay, postdoc in the Knoblich lab and first author of the study.

With additional experiments, the scientists showed that in the Drosophila brain, it is indeed the increased oxidative phosphorylation and NADH/NAD+ metabolism mediated by mitochondrial fusion which is absolutely necessary for tumor initiating cells to become immortal.
“Our findings overturn previous concepts about the biology of these tumors and open up an array of exciting follow up questions, including whether the mechanisms we just discovered in the fruit fly are also applicable to mammalian tumors. Questions we will also strive to answer are, how exactly does the NADH/NAD+ metabolism favour tumor cell immortalization, and does it achieve this via signalling, or through epigenetic changes? We are thrilled to advance our work in this field”, says Knoblich.