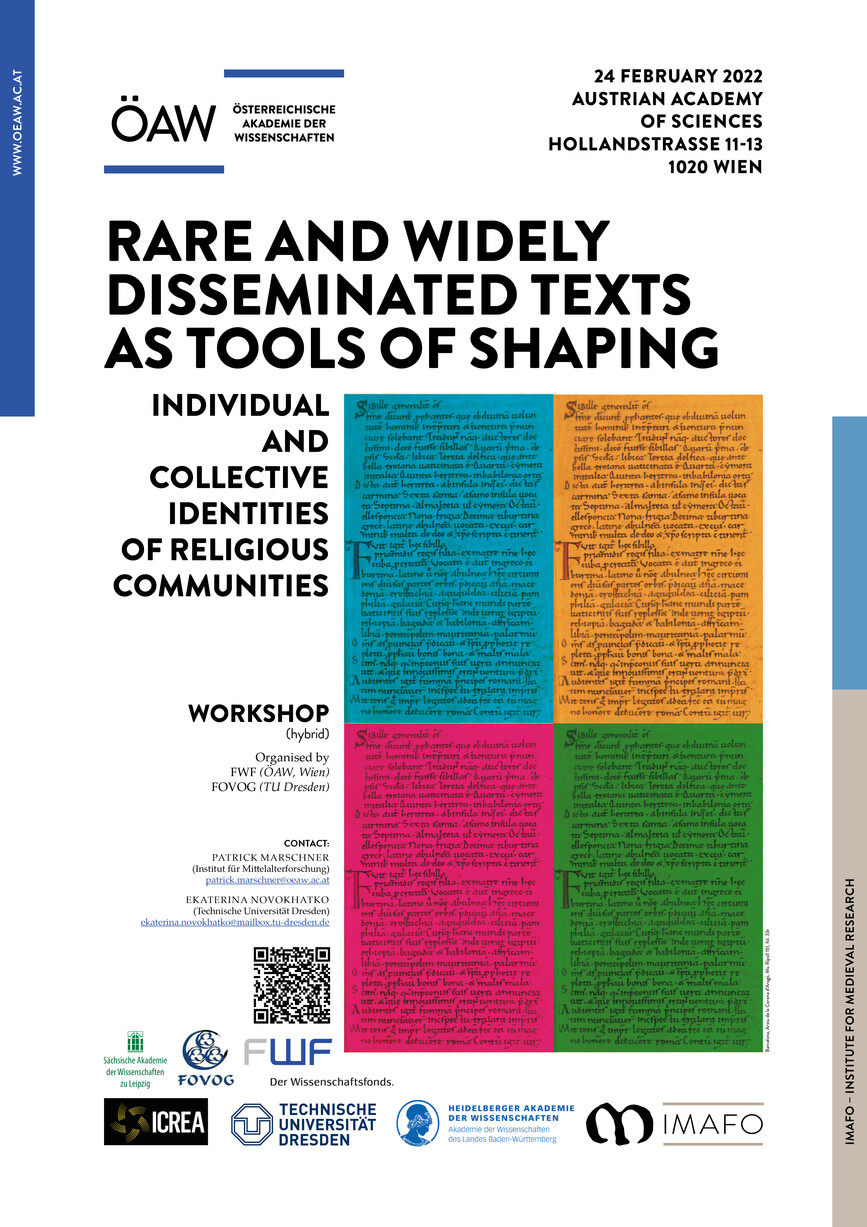 For decades, medieval scholarship has approached the question of identity, be it ethnic, social, or political, religious or cultural, gendered, local or regional, etc., from various angles, work which has more recently helped to reveal the multiple ways in which identities were formed and expressed. In the case of religious communities, for example, various factors contributed to the process of their identity-building. These can be revealed by exploring the uses of the past that shaped communal identities expressed in “a shared body of memories” and through liturgical texts and ceremonies that created and reinforced a ritualised memory that was so crucial within Church communities. The choice of saints’ feasts and holy patrons, the compilation of chronicles and contextual style of historical writing all reinforced institutional identities. While sterling work has been done on broader factors concerning religious identity, the strategical dissemination of texts in shaping religious identities and their function within religious networks has not yet been studied in-depth. This workshop considers the nature of religious identity-building through the various extant texts as objects that contributed to, and are witnesses of, this process. Some of these texts were rare, if not extraordinary; some were regularly copied and became notably popular; others came in the form of réécriture, thus expressing new spiritual concerns in old, established frameworks. Regardless of their differences, they all were a part of the religious culture of medieval Church institutions and reveal much about the ways in which the various identities within and around these institutions were constructed.

This workshop seeks to explore the role of the various extant texts in the construction of religious identities, considering their impact not only in the framework of single communities but also in the larger scale of monastic congregations and religious orders. It asks whether these texts reinforced local religious identities, supported resurrecting institutional pasts, or emphasised unique experiences? Or whether they aimed to smooth over significant differences in order to shape a common spiritual culture through appealing to more general regional or congregational identities? What patterns emerge regarding the opposing dichotomies of old and new texts versus rare and widely disseminated texts? By bringing together colleagues working on spirituality, transcultural studies, manuscript studies, ethnicity and historiography of secular/regular religious institutions and religious orders, this workshop seeks to contribute to our understanding of a medieval religious consciousness that encouraged textual and intellectual mobility and saw these sources crossing borders and disseminating throughout various networks.

The Workshop will take place in a hybrid form, both in presence and online. The venue will be Institut für Mittelalterforschung (IMAFO) at the Österreichische Akademie der Wissenschaften (ÖAW) in Vienna:

Everyone who is interested in attending the Workshop is welcome:
in order to register, please send an email to Patrick S. Marschner:
Patrick.Marschner(at)oeaw.ac.at.

All those who register will be provided in due course with the link and all the necessary technical information in order to participate in the Workshop online. For any further information or request, feel free to contact
Patrick S. Marschner
Patrick.Marschner(at)oeaw.ac.at and
Ekaterina Novokhatko
ekaterina.novokhatko(at)mailbox.tu-dresden.de

The Workshop is organized by the Institut für Mittelalterforschung (IMAFO) of the Austrian Academy of Sciences (ÖAW) in Vienna and by the Forschungsstelle für vergleichende Ordensgeschichte (FOVOG) of the TU Dresden.

The Workshop is funded by the FWF-project P 33080-G “Carolingian Culture in Septimania and Catalonia”.