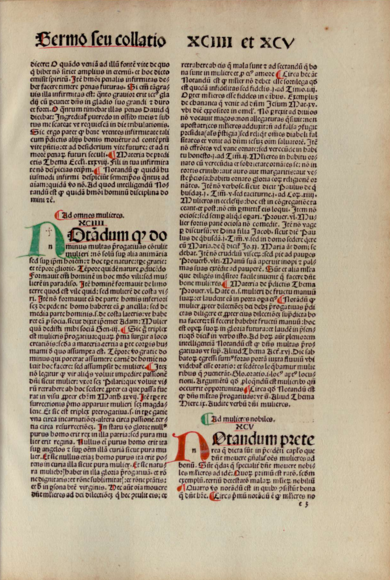 Some medieval preachers on domestic violence

Gender and domestic violence are two interrelated matters of societal relevance and urgency. Violence against women is rooted in normative gendered hierarchies, which are built on specific conceptions of gender and sexual difference. However, gender identities are not trans-historical, trans-cultural entities, as they are not fixed, but instead are historically contingent. They are constructed in processes of reinterpretation which vary across historical, cultural, geographical, and temporal frameworks. I shall briefly review how certain medieval normative views of gender, gender roles and hierarchy justified and enabled domestic violence in the Latin (Catholic) theological tradition of the later Middle Ages (ca. 1200–1500). Afterwards, I focus on three Dominican preachers to illustrate how they engaged with and disseminated those views.

Medieval scholars drew on complex and often contradictory intellectual traditions to conceptualize gender difference.1 Theologians incorporated ideas from Roman legal thought, which viewed women as legal minors, and from Aristotelian natural and moral philosophy.2 Aristotle considered females as being defective males (based on empirical observations in the generation of some animals), and viewed this biological deficiency as engendering a moral lack. Thus, women were perceived as passive, fragile and incapable of reason, hence unable to participate in the public sphere, while men were active, strong, and the reasonable subject by ‘nature’. Christian theologians endorsed these differences not only as being ‘natural’, but also as being divinely ordained. Through interpreting the biblical story of creation (Adam was created first and Eve was then made of his rib), theologians proclaimed man’s superior position over woman, whose designated place was as ‘helper’ to man. The story of the fall from paradise further confirmed the divine mandate: the fate of woman was to be under the dominion and authority of man. This theological contribution meant that a woman’s personhood was defined as relational and dependent on a male authority: they were daughters to a man, wives to a carnal or mystic husband, and widows. Their assigned virtues were obedience, compliance, modesty, and silence. One consequence of the inequality and hierarchical conceptions of genders was that they legitimized violence as a means of reestablishing order when that order was perceived as being threatened. In a later medieval European Christian context, domestic violence perpetrated by men against their wives was legal (within certain limits) because it was considered an act of justice and charity by the ‘head’ and ‘lord’ of the household.3

From around 1200, marriage between two consenting individuals (female and male) became a sacrament. It was a legally binding union sanctioned by God through the representatives of the Catholic Church, which had jurisdiction over all matters pertaining to marriage (except for material ones). Marriage was thus a matter of pastoral care for the Church, whose doctrine and legal provisions reinforced the hierarchy between spouses. It prescribed the dominion of the husband as ‘head’ and ‘governor’ of the household; the wife owed him obedience. As her ‘lord’, it was his right to ‘chastise’ and admonish her as a means of correcting her. While ‘moderately’ hitting a wife was not considered abuse, violence and cruelty were unacceptable and could constitute reason for separation. In brief, the Church sanctified the inequality of this partnership and wife-beating through what feminist theologians call a ‘theology of obedience and ownership’.4

The church was fully invested in disseminating this theology of marriage to lay publics, through preaching, confession, and treatises on marriage and on ‘how to govern one’s family’. Sermons, however, were the main media trough which theological ideas reached larger, lay audiences. In their sermons, preachers mainly stressed the salvific function of marriage and its sanctity and discussed it in rather general spiritual terms as a symbol of union between the Church/soul and God. Others focused on the more practical realities of marriage and on the position of the spouses within this union. To illustrate, I will look at how three popular late medieval Dominican preachers addressed gender hierarchy and violence in marriage.

The French preacher Humbert of Romans (d. 1277) authored a manual of sermon materials organized by audiences and circumstances, of which several were dedicated to preaching to women (Humbertus de Romanis, Sermones ad status, c. 1266–77).5 While Humbert saw women (and likewise men) as a distinct category with specific virtues and vices, he seems to have been mindful of the needs of female audiences. For instance, in a sermon ‘to all women’ Humbert addressed gender hierarchies to argue that women were given certain ‘prerogatives’ not only over all other beings, but over men themselves. Women, according to Humbert, are not inferior to men, because man was created in this ‘vile’ world from ‘the slime of the earth’, whereas woman was made in the terrestrial paradise from his rib (and, thus, of more noble material). The second argument seeks to undermine the basis of the female subservient position within relationships:

Here Humbert’s ‘progressive’ stance on the equality of partners as supported by the Scripture rests on a strategical use of biblical authority: he chose not to use the verse from Genesis 3: 16 that mandated women’s subordinate position, usually employed by other preachers. Perhaps Humbert disagreed with that view – even if he did not exactly challenge the contemporary assumptions of women’s roles and ‘attributes’.

Humbert did not engage with domestic violence as such, but other preachers saw it as a fact of marriage. For example, the Tuscan friar Giovanni da San Giminiano (d. 1333) employed marital imagery in a sermon for a dead nun from his funeral sermons (Sermones de mortuis, c. 1325–30, ‘In funere alicuius religiose mulieris’).6 As usual in this type of sermon, Giovanni included a section in which he described how the deceased complied with her role in life in order to earn salvation: as she took the monastic vows, the nun married Christ. Hence, the preacher employs largely shared stereotypes about wives and married life to assess the compliance of the nun with her status: she did well because she feared her spouse (i.e. did not sin against him, for example by cheating). That was a ‘good’ kind of fear (entailing honoring and respecting), since it was her duty and since it was profitable to do so, Giovanni argued, by also throwing in a bit of market economy thinking (thus, familiar to his fourteenth-century audiences from the rich Tuscan cities). One of his points is that a woman should fear more the mystic spouse than the earthly one, because the former is much stronger: men, however strong, ‘can only hurt or strike the body by lashing, beating or killing. The celestial spouse can kill not only the body but the soul’ (‘In funere’, part B). Fearing God is thus very lucrative and leads to accumulation of goods, i.e. spiritual merits. As we see here, Giovanni applied practical thinking to explain the benefits and duties of the mystic union. Like in any marriage, the woman’s duty was to obey and honor the husband in order to earn salvation.

Wife-beating as a part of marriage and as a man’s prerogative for disciplining his spouse is explored more at length by our last preacher, Johannes Herolt (d. 1468), from Nurenberg. Although there are many instances in which Johannes brought up these issues, I briefly dwell on his discussion from a sermon on marriage (Herolt, Sermones discipuli de tempore, 1418).7 In typical scholastic manner and with clear, explicit language, the Dominican raises the question of ‘whether a man hitting or cursing his wife might sin mortally’. While making careful distinctions between ‘correction’ as duty and ‘unjustified’ violence, Johannes nonetheless reinforces the view that beating is within a husband’s right so long as it is done according to approved ‘rules’:

‘if the reason for correction is good and just and then he hits her moderately, he does not sin mortally since the superior has to correct the inferior for man is the head of woman and not the other way around … ‘You shall be under the power of man’, Genesis 3: 16. ‘The husband owes to the wife correction or discipline and affection’, Decretals 35, question 6, last chapter.’

Wife-beating, therefore, goes hand in hand with the subservient position of women which is endorsed by the scriptural and legal texts. It is a sin only when ‘the cause is unjust’ and the wife is not herself the reason for the husband’s anger, i.e. she did not provoke him, which would have implicitly made it a ‘just cause’ for punishment. Additionally, violent language after beating is always sinful, whether used by the beaten wife or the husband.

To sum up, the pastoral teaching that Johannes and the other preachers disseminated from pulpits was informed by theological thought predicated on the idea that men and women were not created equal. It authorized and justified domestic violence. Even though not all preachers condoned beating and some chose to discuss women’s assigned roles in a more positive light, they all publicized a theology of womanhood and manhood firmly grounded in gendered hierarchies. It cannot escape us that this intellectual tradition, that presented the domination of man and subjection of woman as ‘natural’, was devised by men (most from privileged backgrounds). Although much has changed from the Middle Ages to present time, domestic violence and the normative systems that support it have endured.

4 Nancy Nienhuis and Beverly Mayne Kienzle, ‘Battered Women and the Construction of Sanctity’, Journal of Feminist Studies in Religion 17/1 (2001), 33–61