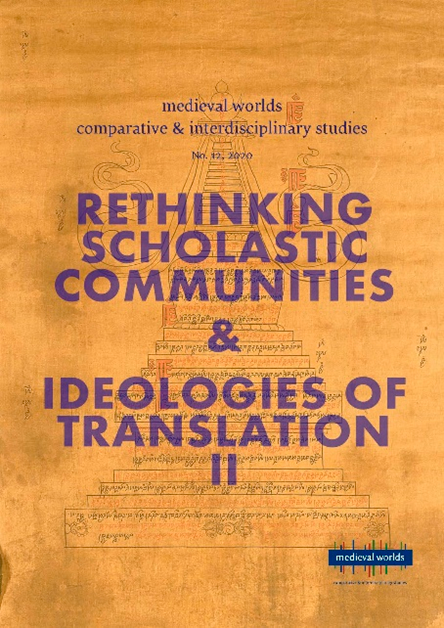 The current issue contains two thematic sections including a subsection and, as a new feature, a review article.

Pascale Hugon and Birgit Kellner introduce the section Rethinking Scholastic Communities as guest editors. The five papers in this section emerged from a workshops series within the framework of the Austrian Special Research Programme (SFB) VISCOM: “Visions of Community – Comparative Approaches to Ethnicity, Region and Empire in Christianity, Islam and Buddhism (400-1600 CE)”. The interdisciplinary VISCOM project pursued the question of how universal religions shaped the construction of communities and identities in medieval times and integrated historical-anthropological case studies in the Christian Latin West, Islamic South Arabia and Buddhist Tibet into a comparative research perspective. The workshop series “Rethinking Scholastic Communities Across Medieval Eurasia” (2018-2019) turned its attention to specialized intellectual cultures that developed and operated within the environment of these universal religions’ ideas, norms, practices and institutions.

The first paper in this section explores the role of competition between masters and their communities in shaping the dynamism of theological debate in twelfth-century Europe: Constant J. Mews examines celebrated confrontations between individual monks and schoolmen leading to the evolution of a range of educational communities, of monks, of regular canons, and of secular clergy; the increasing tendency to professionalization in the teaching of theology after 1150; as well as the competition between the cathedral school at Notre-Dame and the canons of Saint-Victor.

José Ignacio Cabezón’s paper presents a diachronic perspective on scholasticism that emphasizes the social and institutional aspects of Buddhist monastic communities. He identifies three critical historical moments for the emergence of Buddhist monastic communities in India and focuses on the importance of debate, commentary and prayer to scholastic identity in India and Tibet.

Cathy Cantwell’s article shows how Buddhist monasteries became seats of religious and politico-economic authority throughout communities in Tibet in the period from the eleventh to the thirteenth centuries, when Buddhist religious schools developed. It probes authority and authorship in the case of the codification of the textual heritage of Buddhist Tantras in the twelfth century, resulting in the subsequent development of a rNying ma school.

Bénédicte Sère traces the academic exercise of disputatio and reflects on the role of dialectics in the medieval production of knowledge. She presents political and ecclesiological treatises in the time of the Great Schism as a case study for showing the difference between irenic and polemical dialectics, but also follows specialists that move beyond the academic context of scholasticism.

The second section is a follow-up of the thematic cluster Ideologies of Translation, which was initiated in the previous volume. Conceptual Narratives of Translation in the Latin Middle Ages by Réka Forrai applies a modern sociological theory of narrative for the analysis of medieval Latin translation practices and argues that topoi in prefaces are narrative key elements in these translations.

Five more articles with an introduction add to the cluster Ideologies of Translation, II. They form the subsection Multilingual Sermons, guest edited and introduced by Jan Odstrčilík. His introduction focuses on sources, theories and methods for these multilingual sermons in medieval European contexts.

Code-switching in medieval English sermons and other multilingual text types is the topic of Herbert Schendl’s paper. He looks at code-switches, which were a well-known discourse strategy in multilingual societies, in the Old English and the Middle English periods. He shows that multilingual sermons, especially the “macaronic sermons”, are not as unique as sometimes claimed in sermon studies and places them in the wider bilingual context of medieval written texts in England.

Nicole Bériou addresses the interplay of orality and written text. She analyses bilingual reportationes of sermons in thirteenth-century France, where preaching became an intense and prominent practice of Western church life in the thirteenth century. Her paper is based on the materials on tools for putting together sermons, with which mendicant friars equipped the libraries of their convents, as well as notes that were taken during sermons by theology students in Paris for their private use.

Carlo Delcorno contributes a study on bilingualism in medieval Italian preaching. He examines the language of an important collection of sermons by Angelo da Porta Sole, who preached in Tuscany in the early fourteenth century. Carlo Delcorno distinguishes three ways in which Latin and the Umbrian vernacular are combined in sermons by this prominent figure - predicator generalis of the Dominican Order and Bishop of Grosseto.

The analysis of bilingual strategies continues with Lidia Negoi’s paper on fourteenth-century Latin sermons from Catalonia. By choosing the regional historical context of Catalonia and Aragon, the author decided for the most understudied areas of sermon studies.

The fifth paper in this section is Tom ter Horst’s article on the typology and spectrum of Latin-Irish and Latin-English code-switches in medieval sermon literature. He presents the advantages of Myers-Scotton’s Matrix Language Frame concepts. Muysken’s threefold typological model is based on notions of grammatical government. In Ter Horst’s study it turns out to be beneficial for the determination of difficult syntactic structures.

Finally, this volume contains a new feature: Roy Flechner wrote a review article on Catherine Holmes and Naomi Standen’s special issue “The Global Middle Ages” for Past and Present (2018), which developed from the activities of the research network “Defining the Global Middle Ages”, centred at the Universities of Oxford, Birmingham, and Newcastle. The authors of this issue aim to set a new course in “thinking globally” about the period.

Bénédicte Sère
Between disputatio and Polemics: Dialectics as Production of Knowledge in the Middle Ages

Herbert Schendl
Multilingual Texts as a Reflection of Code-Switching in Medieval England: Sermons and Beyond