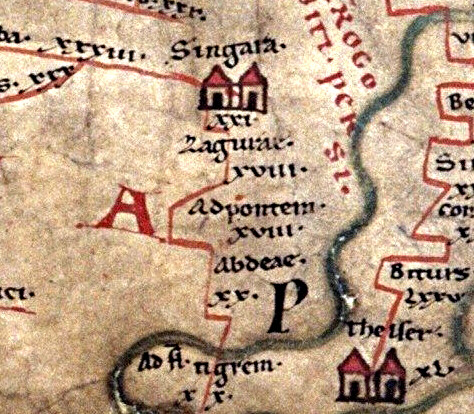 TABULA PEUTINGERIANA is the result of successive copies and overprints carried out at various times from one or several ancient originals. The oldest information probably goes back to before 79 AD (Pompeii), the newest to the 5th century (Constantinople). The Detail shows the mesopotamian town Singara (now Sinjar) and the inhabitants of Mount Sinjar, the "Trogoditi. persi." (Troglodytae persiae). (public domain; CC Dr. 91.41; https://commons.wikimedia.org/wiki/File:Singara.jpg)

The Tabula Peutingeriana and the Persian Troglodytes

In Latin and Greek literature ethnonyms played a central role in authors’ sense of place. Geographical treatises, as well as the numerous ethno-geographical digressions in historiographical texts, reflect an image of the world as the product of the totality of place names and ethnonyms. Thus, ethnonyms constitute a fundamental part of the conceptualization and representation of space. Their importance for the Roman and post-Roman sense of place, as well as their longevity, made ethnonyms a central instrument in authors’ attempts to understand and organize a shifting ethnic landscape. Ethnonyms served both to contextualize the gentes dwelling on the periphery of the Roman world and to support coeval political agendas.

The Tabula Peutingeriana, the only world map to survive from antiquity, contains almost 150 inscriptions that have been interpreted as ethnonyms. Among these, the inscription TROGODITIPERSI (10B5) represents one of the most interesting cases. Corrected into TroglodytaePersiae, this entry is the only instance in which the name ‘troglodytes’ is matched with the ethnonym Persians. This seems in contradiction with the image of the Persians that shines through the pages of very influential Late Antique Roman historians. According to authors such as Ammianus Marcellinus, Procopius or Agathias, the Persians shared some characteristics with other barbarians, but they were also a unique interlocutor for the Romans, an alius orbis representing another – although not equal – civilization. According to Ammianus, for example, Persians did not know pederasty and did not engage in obscene behaviour, such as urinating in public. They were also extremely frugal when it comes to food and particularly disciplined on the battlefield. The overt contradiction between this representation of the Persians and the inscription on the map leads to the question: where did the mapmakers get the idea of portraying the Persians in such negative terms to consider them troglodytes? The answer can be found broadening the scope of the primary sources. If influential historians transmit a nuanced image of the Persians, other sources call them explicitly barbarians. A register of provincial, urban, and ethnic names, known as Laterculus Veronensis (314 CE), for example, does not imply any difference between Persians and other barbaric groups. In this text the ethnonym Persae is included in a list of gentes barbarae who spread under the authority of Roman emperors. For the author of this catalogue, there was no substantial difference between Persians and other barbaric ethnic groups, like Saxons, Vandals, and Goths. A similar reasoning can also be found in a certain number of inscriptions dedicated to the emperor Julian and found in the eastern provinces of the Empire. In these texts victory titles, such as debellator omnium barbararum gentium or extintor barbarorum, were instrumental to the imperial propaganda in the months preceding the Persian campaign of Julian. Although it does not contain neither the term barbari nor troglodytae, an episode in Ammianus’ account of the Persian campaign represents one of the closest examples to the disparaging entry on the Tabula Peutingeriana. In front of an army that was increasingly demotivated and in need of supplies due to the effective scorched-earth policy of the Persians, Julian ordered some Persian prisoners to be brought before the army and harangued his troops as follows: ‘Behold what those spirits consider men, little ugly dirty goats; and creatures who, as many events shown, throw away their arms and take to flight before they can come to blows.’ (Res Gestae 24.8.1). In Embassy to Julian, Libanius, friend and advisor to the emperor, ascribes two quintessential barbarian vices to the Persians: the disdain for blood ties and the lack of mercy. Prone to violent outbursts, Persians act like wild beasts, while Julian is a Greek who rules over Greeks, and therefore follows a superior moral code of conduct. The political ideology supported and spread by Julian and his pagan collaborators tended to stress the Hellenic nature of Roman power. Thus, the more the Romans resembled the Greeks, the more the Persians took the role of barbarians par excellence. In addition to the imperial discourse, a second context in which it is possible to find the same anti-Persian rhetoric is the narrative of Alexander the Great. In a Roman world which looked at the Persians with renewed apprehension, the myth of Alexander the Great enjoyed a period of revival. Alexander’s expedition was considered both as a model and as an omen for the Roman emperors, who were willing to start a campaign against the Persians. The account of Alexander’s Persian campaign provided a story in which the Persians played the role of the main antagonist, who eventually succumbs, and thus it served to reassure a Roman public worried about the aggressive Sasanian policy. Finally, and most significantly, the revival of the Alexander narrative also finds expression on the Tabula Peutingeriana, where references to his deeds play a central role in the map’s portrayal of the eastern lands. The campaigns of the Macedonian king are evoked through the numerous cities that bear his name (founded during or after Alexander’s reign), the mention of the Indian elephants, and especially two isolated symbols, called the ‘altars of Alexander,’ which, marking the limits of Alexander’s expeditions, define the edges of the inhabited world.

To conclude, the enigmatic Persian troglodytes found on the Tabula Peutingeriana can be interpreted as an extreme example of Late Antique anti-Persian rhetoric, which, fuelled by the political tensions at the time, repeated and adjusted themes of Alexander’s narrative and perpetuated the most derogatory stereotypes of the Persians.

'Comparative Approaches to Ethnonyms: The Case of the Persians'