The Carolingian kingdom of Italy and its Rulers in a volume for the first time! | Clemens Gantner 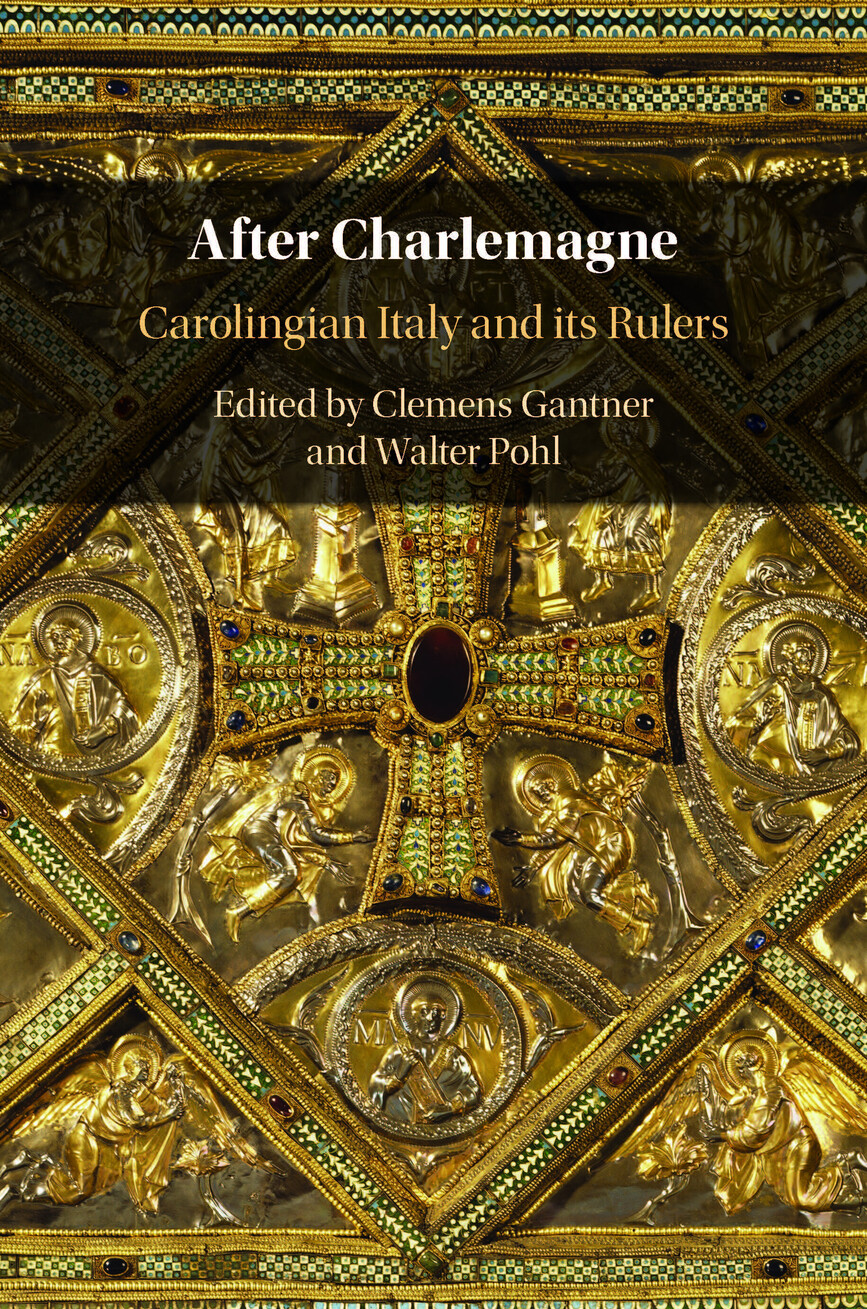 In 774, Charlemagne, Charles the Great, King of the Franks, invaded the Italian Lombard kingdom and had himself crowned king of the Lombards in Pavia. For Italian history, this still counts as one of the most decisive events. Northern and central Italy would be part of the emerging Kingdom of Italy for the centuries to come. This kingdom of Italy was, however, shaped by others, not the famous king himself, who hardly ever visited the peninsula – and it was largely done by the generations of Carolingian rulers that came after him. Strangely, this process over the most part of the ninth century has not been studied with enough intensity so far and a comprehensive depiction of that era does not exist in English. Consequently, the new volume entitled ‘After Charlemagne. Carolingian Italy and Its Rulers’ helps to fill this gap, by bringing together contributions from many of the best experts in the field of early medieval Italy.

The volume thus addresses the administrative, cultural, historical, and political impact of Carolingians and Franks in Italy in the ninth century. In this short blog introduction to it, I shall first concentrate on a phase in the life of one of the main protagonists of the biggest part of the chapters: Louis II of Italy, emperor from 855 until his death in 875. In 840, he was appointed king of Italy at the age of 15 but so as to be subordinate in this role to his father, Emperor Lothar I. But now something unprecedented in Carolingian history happened: The young Louis was not thrown in at the deep end, contrary to how his father or grandfather had been in their respective sub-kingdoms. Rather, Lothar did everything he could to organize his son’s careful grooming into his role as ruler, even though he himself was at that time occupied by an unsuccessful civil war against his two brothers, Louis and Charles, following the death of Emperor Louis the Pious. Lothar’s care for his son is accordingly laid out in detail by Elina Screen in the volume. Even in 844, when Lothar would hardly have had an army worth mentioning remaining, he managed to muster a sizeable force for his first-born son, enabling him to reinstate imperial authority in Rome, which had been challenged by the new pope Sergius II. I have analysed the ensuing punitive expedition to Rome in my own contribution, entitled ‘A king in training’. It shows how the ecclesiastic and political support for the young king in Italy worked – through the support of influential Franks, who were loyal to the emperor. Moreover, the trip to Rome established many themes which would characterize the remaining decades of Carolingian Italy: The cooperation of the new Frankish elites, the quest to gain control over the Italian centre and south, the latter of which was contested among several Lombard, Muslim, and Byzantine warlords – and the difficult relationship with the papacy, oscillating between cooperation and conflict. Indeed, Louis’ career would reach its pinnacle in 871, when he conquered the surprisingly strong Emirate of Bari – only to be taken captive by rebellious southern lords a few months later and return home empty handed. When he died in 875, he had still been the most powerful and influential ruler on the peninsula in the Frankish era. Carolingian Italy kept on struggling until the death of Emperor Berengar I in 924 – but Louis II embodies it like no one else: Great success and ultimate failure lay very closely together, even for the greatest European realm of its time. I have thus described it here in a little more detail.

I shall now quickly present the main parts of the volume:

The collection starts with a section bringing together three overviews covering ninth century Italy from three different angles: with Thomas Noble, Paolo Delogu and François Bougard, three leading experts in the field give their respective takes on the topic. Noble writes from the grand general perspective and finds a significant degree of Carolingian influence on the north Italian ‘kingdom of the Lombards’. Delogu looks at the names this kingdom in Italy was given by contemporaries, and connected with it, which functions were ascribed to it. Bougard then rounds off the introductory section by assessing the extent to which this kingdom had remained Lombard despite Carolingian rule. He analyses the organization of the kingdom and the literary, cultural as well as legal output of its writing centres and is able to show that the Frankish influence was indeed felt, but only in certain respects.

Drawing on these basic assertions, the second section is then dedicated to the organization of the Frankish kingdom in the north. Stefano Gasparri looks at the easternmost regions of the realm, a territory that often seems to be peripheral to the interests of the rulers but was in fact very important to the Carolingians, who tried to tighten their grip on the duchy of Venice and Istria. They had to build on strategies already employed by their Lombard predecessors, but had to refine and expand these to be effective in this region. Giuseppe Albertoni in his chapter then analyses the relations between rulers and high-ranking officers in Italy and their vassals. He detects different types of vassalage, which is reflected in the terminology used in the contemporary sources, and thereby provides important insight into the ways the kingdom of Italy was governed. Connected with both these chapters, Igor Santos Salazar uses the bishoprics of Parma and of Arezzo as test cases and then provides an in-depth-analysis of their political fate during the latter part of the period in question, when loyalties were often tested and the “right” king to support was not always obvious.

The third section looks at a succession of Carolingian rulers of Italy, illustrating, in addition to the special topics under research, an evolution of government in the early ninth century. Marco Stoffella delivers a detailed study of modes of charter production and specifically of the dating of charters in the times of King Pippin of Italy (787-810). He also focusses on the reactions to the premature death of Charlemagne’s second oldest son. The articles by Elina Screen and Clemens Gantner then build the bridge between this hitherto understudied son of Charlemagne1  and the generations of his grandchildren and great-grandchildren, as we have already seen above.

The fourth and final section deals with more regional policies in ninth-century Italy, all addressing cities and courts. Thomas Brown first examines the very special case of Ravenna and its still quite ‘Byzantine’ political culture in a changed world of northern Italy. Caroline Goodson then looks at the oftentimes methodical development of urban centres in the south of Italy in our period, also looking closely at the transfer of saint cults and relics within the region. Francesco Veronese also works in a similar direction, analysing the appropriation of saint’s cults and hagiography stemming from important centres like Rome, and as appropriated in the north of the peninsula. And Giorgia Vocino rounds off the volume with a study on the development of rhetoric and court culture in Italy between the eighth and the tenth centuries. She addresses the learned discourse at the Italian courts and shows the high degree of sophistication that was indeed present – thereby neatly connecting with Bougard’s contribution in the first section.

The volume can certainly not cover all aspects of ninth century Italy, but it at least addresses many. It looks at specific developments, oftentimes from multiple angles. I therefore hope that it will be useful for scholars and students working on early medieval Italy, as well as for readers with a general interest in things medieval and Italian history.

1 This lamentable lacuna is soon to be remedied in full by the volume ‘Spes Italiae’, edited by Giuseppe Albertoni and Francesco Borri (expected 2021/2022).

1. Italy after Charlemagne: scope and aims of the volume
Clemens Gantner and Walter Pohl

2. A brief introduction to Italian political history until 875
Clemens Gantner

Part I. Was There a Carolingian Italy?:

3. Talking about the Carolingians in eighth- and ninth-century Italy
Thomas F. X. Noble

4. The name of the kingdom
Paolo Delogu

5. Was there a Carolingian Italy? Politics, institutions and book culture
François Bougard

6. The government of a peripheral area: the Carolingians and north-eastern Italy
Stefano Gasparri

8. Shaping a kingdom: the sees of Parma and Arezzo between the reigns of Louis II and Berengar
Igor Santos Salazar

11. A king in training? Louis II of Italy and his expedition to Rome in 844
Clemens Gantner

12. A Byzantine cuckoo in the Frankish nest? The Exarchate of Ravenna and the Kingdom of Italy in the long ninth century
Tom Brown

14. Rome and the others: saints, relics and hagiography in Carolingian north-eastern Italy
Francesco Veronese

15. Between the palace, the school and the forum: rhetoric and court culture in late Lombard and Carolingian Italy
Giorgia Vocino