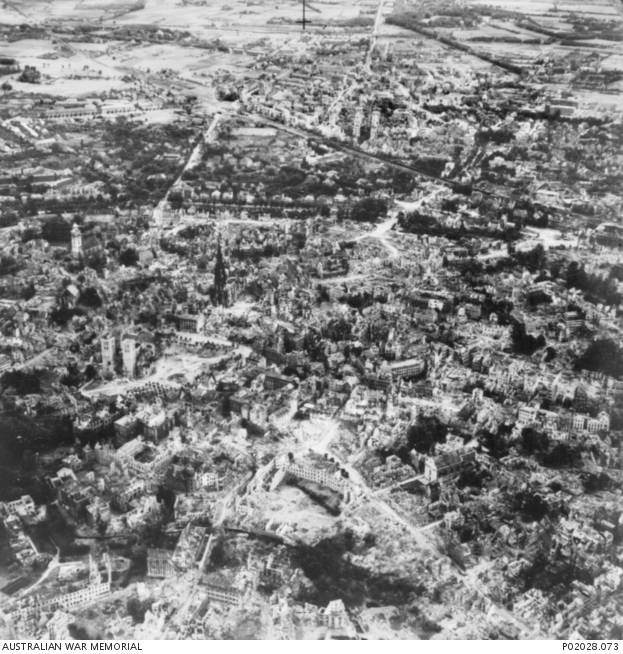 On Sunday the 25th of March 1945 allied bombers appeared in the bright sky above the city of Münster. This would be the last time that the pilots of squadron 466 of the Royal Australian Air Force (RAAF) released their explosive cargo on the city. On Easter Sunday, the 2nd of April, American and British Armoured forces captured the devasted city and Captain Louis B. LaFarge, a member of the US Armies Monuments, Fine Arts, and Archives Section, commonly known as the Monuments Men, noted:

“The greater part of the old city of Muenster is gone for good. It is little better than rubble with the towers of the medieval churches alone standing to mark what the city once was. All the fine fourteenth to eighteenth century buildings are gone.”

One of those destroyed buildings was the University Library of Münster and even though the librarians had previously secured the precious medieval manuscripts in a bunker beneath it, they still caught fire and were destroyed.

Among those burned manuscripts was the Legendarium Bodecense. It was a collection of saints’ lives in twelve separate volumes, dating from the middle of the 15th century which – like the name suggests – was written in the monastery of Böddeken, located near the city of Paderborn. What made this blow for historical research even more poignant was the fact that the Bollandist Henry Moretus had studied the legendary of Böddeken and in 1908 he had published a list of the saints lives it contained. The academic world was able to know what had been lost in that allied air raid in the last days of the second world war but with no chance of regaining it.

In my quest to uncover all high- and late medieval rewritings of the life of saint Rupert of Salzburg I was tempted to look at Henry Moretus’ list. In doing so I discovered that the legendary of Böddeken had contained a life of saint Rupert, but oddly enough also two entries concerning his relative saint Erentrud. Naturally, this should have been a dead end. However, Henry Moretus had added a clue that prolonged my search – in his description of the second life of saint Erentrud he observed that the explicit of the text is identical to a life of saint Rupert in the Hagiologium Brabantinorum (redaction D). This collection of saints’ lives was compiled in the 1470s and 1480s by a canon of the Rouge-Cloître abbey, near Brussels called Jean Gieleman. From Wilhelm Levison’s research I knew that the end of Gielemans Vita Ruperti was in turn identical to that of a Legenda Aurea printed by the first printer of Cologne, Ulrich Zell, in 1483 (redaction E). The master printer and the humanist Antonius Liber created a prolonged version of the Golden Legend. To accomplish this, they added saints’ lives from a local legendary compiled by Hermann Greven in the 1460s. Grevens autograph has since left Cologne and is preserved in the State Library of Berlin under the shelf mark MS Theol. lat. fol. 706.

After a detailed comparison of the texts, I was able to conclude that Grevens legendary was indeed a source for the two late medieval redactions of the life of saint Rupert in the Hagiologium Brabantinorum and the printed Golden Legend from Cologne. But where did Grevens text origin? Since several other studies have proposed the possibility that the lost legendary of Böddeken was one of Grevens sources I tested this hypothesis. It turned out that the incipit and the explicit of the combined life of saint Rupert and saint Erentrud in the legendary of Hermann Greven is identical to the two lives of saint Erentrud in Henry Moretus list. A comparison with the fragments of the saint Rupert vita from Böddeken which is in part preserved in the footnotes of the Acta Sanctorum edition delivered more evidence. There are striking similarities to the life of saint Rupert and saint Erentrud from Grevens legendary, for example the alternate spelling of place names, such as Vivaciam instead of Iuvavum. Accordingly, I deem it highly likely that by making this copy in the 1460s, this Carthusian monk ultimately saved the text from its future destruction in 1945. Of course, the question remains where and when this life of saint Rupert and saint Erentrud was written. Judging from the humanist undertone of its content its composition happened not long before it was added to the legendary of Böddeken in the middle of the 15th century. One reads for example that saint Rupert was driven away from his bishops see in Worms by Arians. After that, the exiled bishop ventured south to an inhospitable place full of snakes where Attila used to have a hunting lodge. This place was Salzburg. The connection between the famous ruler of the Huns and the demise of the Roman city of Iuvavum was quite common in the late medieval humanist historiography of southern Germany. The idea of Attila hunting in this region while living in a wooden palace most likely stems from the reports of Priscus. The eastern Roman diplomat visited the court of Attila and is therefore the best source on the lifestyle of the Huns by far, and he mentions both Attila hunting on Roman territory and him living in a wooden palace.

Even more interesting is the new role that saint Erentrud gets to play in this legend. She is stylized as the disciple of saint Rupert. A good third of the text is comprised of lengthy dialogues between the two, following the classical model of a discussion between a teacher and a student while also invoking biblical connections. Thus, Rupert often reprises the role of Jesus Christ while Erentrud that of the women who washed the feet of the saviour or Maria of Magdala. The inclusion of such dialogues was a common theme of saint’s lives written in Germany between 1450 and 1530.

A detailed analysis of these previously unknown late medieval life of saint Rupert and saint Erentrud together with an edition of the text can be found in my master thesis “Das literarische Nachleben des heiligen Rupert”. What seemed to have been lost was finally regained.

Caption:
Aerial photograph of Münster taken by squadron 466 of the RAAF on the 25th of March 1945.
Digitized by the Australian War Memorial https://www.awm.gov.au/collection/C287949