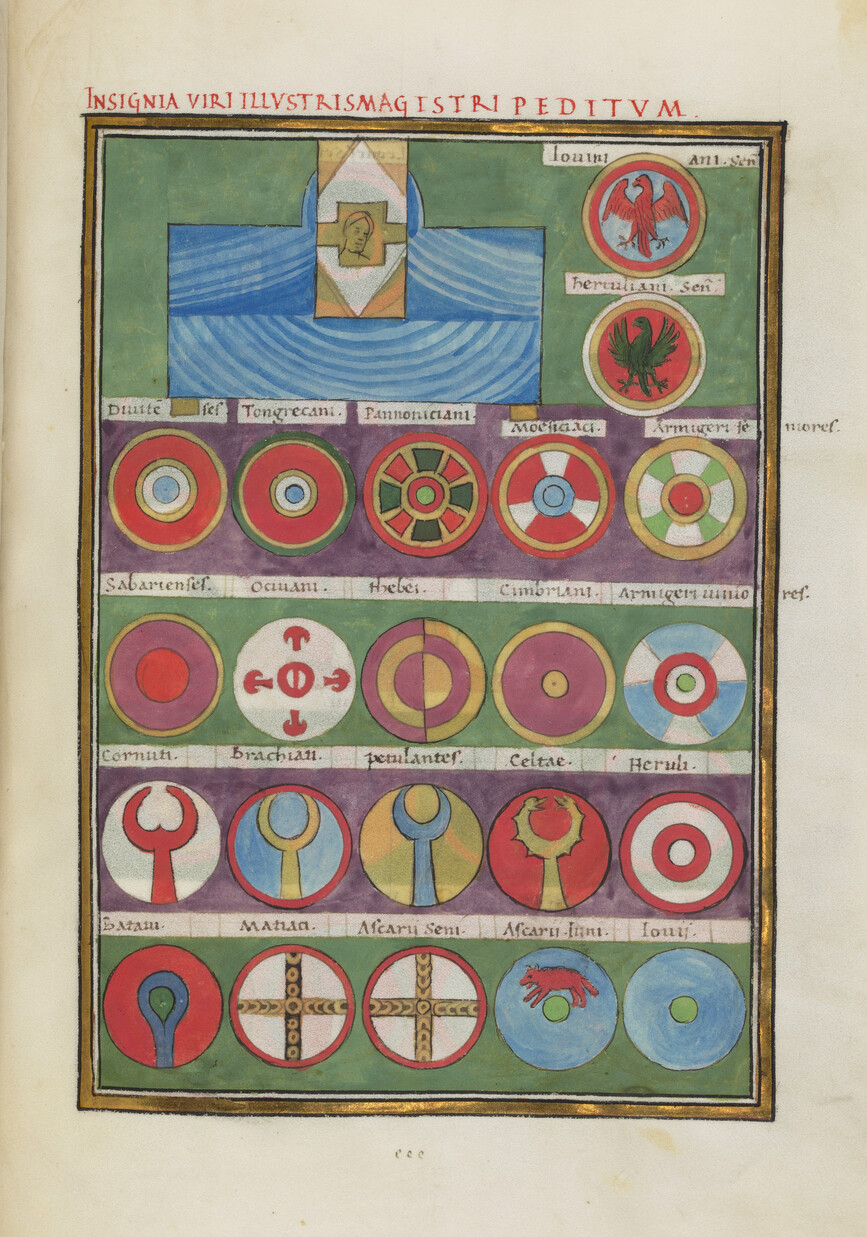 Defined as “a nest of intractable, probably insoluble but fascinating problems”1 or, in the 19th century, “das flüchtigste deutsche Volk”2,  the Heruli give historians a headache because of the extremely peculiar transmission history of their name. The main reason for this scholarly conundrum is the emergence of this group in two very distant geographical areas at almost the same time. According to a late 3rd-century Greek source, the Heruli were a group of barbarians who inhabited the region to the north of the Black Sea, while according to other testimonies, they dwelt in the Lower Rhine and were a threat to Roman Gaul.

The first author to mention this ethnic group is Dexippus, a Greek historian and public official, whose works survive only in fragmentary form. One of his historical texts, a universal history (Χρονικὴ ἱστορία) composed around 270, refers to a group called  Ἕλουροι and explains the ethnonym as deriving from the Greek term for ‘marsh’ or ‘meadow’ (ἕλος). In the fragments that have survived, Dexippus does not explicitly connect these  Ἕλουροι with the barbarians that raided the Roman cities of the Balkans and Asia Minor between 267 and 270. However, later sources that arguably derive some of their information from Dexippus, like the Historia Augusta, the Chronicle of George Syncellus, and Zonaras, include them in at least one of these invasions. These incursions across Roman provinces caused destruction but eventually ended poorly for the barbarians, who were defeated by Gallienus at the River Nestus in 268 and by Claudius II at the battle of Naissus in 269. Following these events, some Heruli surrendered and were enlisted into the Roman army.

Both the fragmentary nature of the only contemporary source and the vagueness of the later accounts makes it difficult to reconstruct with precision this phase of the history of the Heruli. A few points, however, seem clear. This gens inhabited the northern shores of the Black Sea and the Sea of Azov. In the eyes of Roman and Byzantine authors who were keen to integrate this new actor into their established ethnographic schemes, the Heruli were categorized either as a Σκυθικὸν ἔθνος or as a Σκυθικὸν and Γοτθικὸν γένος. Finally, writing around 550 in Constantinople, Jordanes linked the  Ἕλουροι to the Heruli of his time, repeating the same explanation of their ethnonym while adding an explicit reference to the Maeotian Swamp (palus Maeotis).

In addition to this narration, there exists another, western and exclusively Latin tradition, which projects a quite different image of the Heruli. A panegyric in honor of Maximian (21 April 289) attests to the presence of the Heruli in Gaul. Here they are mentioned, together with the Chaibones, as a group, which had recently terrorized Roman territories, but had been decisively crushed by the emperor Maximian. As part of the speaker’s attempt to enhance the scale of Maximian’s victory, Chaibones and Herules are said to be both ‘the foremost of barbarians in might’ (viribus primi barbarorum) and ‘the most remote in their location’ (locis ultimi). However, rather than a complete annihilation, the victory of Maximian lead to another recruitment of Heruli, who became Roman auxiliary soldiers. Ammianus Marcellinus refers to them in three different books of his work and considers them only as military auxiliaries. In line with the testimony of Ammianus, the Heruli are also mentioned by the Notitia Dignitatum. The unit of the Heruli seniores is listed next to the unit of the Batavi seniores as one of the elite units of skirmishers who were integrated into the mobile army. The ethnonym is also included in a few inscriptions dating to the last quarter of the 4th century, which were excavated in the city of Iulia Concordia (modern Concordia Sagittaria). These indicate the presence of Heruli near the eastern sector of the Alps, a region which at the time was of the utmost strategical importance.

Although Ammianus is mainly interested in the military activities of the Heruli within the Roman army, a passage of the Res Gestae shines some light on the location of their homeland. When Constantius II demanded the dispatch of the Heruli for his imminent campaign against the Persians, Julian disregarded the order arguing that these troopers had abandoned their homes on the other side of the Rhine (relictis laribus transrhenanis) and joined the Roman army on condition of not being transferred beyond the Alps (ne ducerentur ad partes umquam transalpinas). The inscriptions from Concordia show the later non-compliance with that promise, but do not confute Julian’s statement.

During the 5th century, a few Latin sources continue to address the Heruli. This time, however, they are not described as Roman auxiliaries, but as enemies of the empire. In a letter to the widow Ageruchia, Jerome includes them in a famous list of barbarian groups that crossed the frozen Rhine near Mainz on the 31st of December 406 (or 405) and pillaged the northern part of Gaul. In the 450s, the bishop Hydatius recounts two different raids that the Heruli carried out on the northern and western coasts of the Iberian Peninsula. Finally, one finds another reference to the Heruli in a letter sent by Sidonius Apollinaris to his friend Lampridius. In the text, Sidonius describes a series of envoys coming from all around the world to the court of Euric, King of the Visigoths. The ambassador of the Heruli is listed after the envoys of the Saxons and the Sygambers, an archaic ethnonym used for defining the Franks, but before the representative of the Burgundians.

With Sidonius ends a series of Latin sources that refer to the Heruli in the west. These texts reflect a quite different image of this gens if compared to the Greek texts mentioned above that consider the Heruli as a people living north of the Black Sea. These two distinct traditions have led to the hypothesis of the existence of two different groups of Heruli – the western and the eastern Heruli. With regard to the western Heruli, as Roland Steinacher argues, none of these Latin sources provides sufficient evidence to prove the existence of a Herul kingdom on the Lower Rhine. Rather, these texts attest to the way that late Roman literati imagined the ethnic landscape of the Rhine frontier. All of the references found in the Latin sources reflect at least the vague notion that the Heruli were an ethnic group living near the Lower Rhine whose interaction with the Romans, whether hostile or not, occurred in Gaul, Spain, and Britain.

The coexistence of these two historical narratives and its repercussions over the mental maps and the strategies of classification of the contemporary authors will be elucidated within the ongoing project Mapping Medieval Peoples: Visualizing Semantic Landscapes in Early Medieval Europe. By collecting all the references in a relational database and creating a deep map that will visualize the gathered information, the project will provide an innovative perspective on this scholarly debate, clarify authors’ sense of place and narrative strategies, as well as put contemporary spatial digital technologies to test in the representation of pre-modern geographies.