How new cell types evolve remains a major question in biology. Across multi-cellular organisms, reproduction generally occurs via small, motile sperm that fertilize large immotile eggs. However, the widely varied morphologies of sperm makes one wonder whether this cell type evolved from a single common ancestor or if sperm identity was defined by distinct events in separate group of organisms. In work published today in Nature Communications, a collaborative project between the Frederic Berger lab at the Gregor Mendel Institute of Molecular Plant Biology, an Institute of the Austrian Academy of Sciences, and the Takashi Araki lab at Kyoto University found that a single molecular event which occurred 700 million years ago was responsible for the evolution of sperm in all land plants. 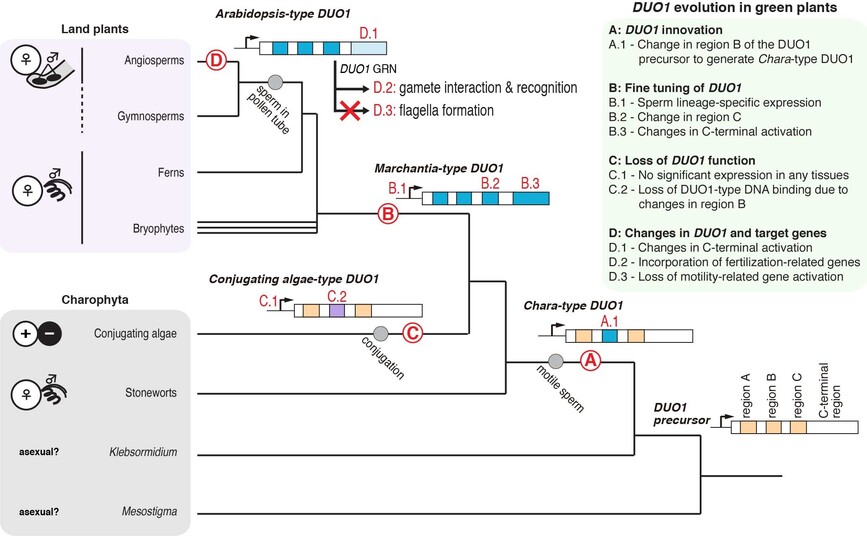 According to Tomokazu Kawashima, who led the project in the Berger lab and is now an assistant professor at the University of Kentucky College of Agriculture, Food and Environment: “We knew from previous work that a protein called DUO1 controls the development of non-motile sperm in the model plant Arabidopsis. We found similar DUO1 proteins in liverworts and mosses, which are representative of the first land plants and have motile sperm. When we disrupted the DUO1 gene in liverworts, they were no longer able to form sperm, confirming that DUO1 has controlled sperm differentiation since land plants evolved.”

The researchers then compared the biochemical properties of DUO1 to other closely related proteins and found that a small change in the protein allowed it to bind a new DNA sequence, enabling it to regulate new genes. These genes then formed a network responsible for sperm development. While DUO1 continues to control these networks, the networks themselves have evolved, giving rise to the different morphologies found across plants today.

Collaborating teams went on to look for DUO1 proteins in other ancestors of land plants. DUO1 was not found in the most ancient algae, which also do not form sperm. In contrast, they did find DUO1 in the motile-sperm forming stoneworts, which diverged 700 mya from an ancient ancestor common to all land plants.

Frederic Berger says “Taken together, these data show that a single event led to the development of all of the diversity we see in sperm amongst plant species today. This work also provides a framework to understand the origin of sexuality in animals, which also show diverse sperm morphologies. More practically, we think this work will have important long-term impacts on our capacity to improve plant reproduction for food security, for example in engineering male sterility for plant breeding or hybrid seed production.”