An international research team has revealed a novel mechanism for the perception of endogenous peptides by a plant receptor. The discovery of this activation mechanism sets a new paradigm for how plants react to internal and external cues. 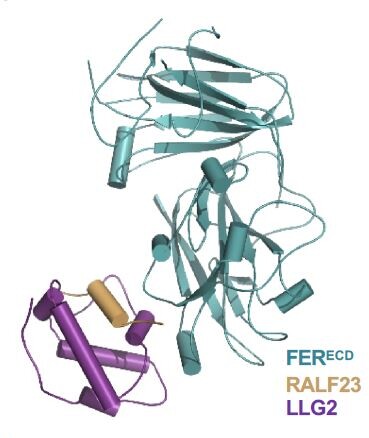 Multicellular organisms must sense and respond to their environment in a coordinated way. In both plants and animals, a family of proteins named receptor kinases are largely responsible for this activity.  Receptor kinases recognize chemical signals, such as growth hormones or pathogen signals, from outside the cell and initiate responses to this signal inside the cell.  The model plant Arabidopsis thaliana contains over 400 of these receptor kinases – ten times more than are found in humans - and they are critical for plant growth and development and immune signaling.

One of the most enigmatic of these 400 receptors was identified over 15 years ago and named Feronia, after the Etruscan goddess of fertility, since it was required for fertilization. Over the last 15 years, this same protein has been shown to be involved in many critical aspects of plant biology, including shoot and root growth, response to hormones, tolerance to salt stress and pathogen defense. Feronia is able to recognize diverse signals, including multiple members of the RALF family of peptide hormones, each of which elicits a different developmental response. A major outstanding question has been how this single protein is able to recognize so many different inputs to coordinate plant growth.

In “Mechanisms of RALF peptide perception by a heterotypic receptor complex” published today in Nature, an international consortium involving Dr. Youssef Belkhadir and PhD student Katarzyna Parys from the Gregor Mendel Institute of Molecular Plant Biology of the Austrian Academy of Sciences and co-led by Jijie Chai (Tsinghua Univeristy, China) and Cyril Zipfel (The  Sainsbury Lab, UK/ University of Zurich) describe the molecular details of how Feronia recognizes RALF23 to regulate immune responses.

It had been previously shown that a third protein, named LLG2, was also involved in perception of RALF23 by Feronia. In the present work, the authors used a technique called X-Ray crystallography to determine the structure of the Feronia – LLG2 – RALF23 complex. Based on the current understanding of how receptor kinases work, they though that Feronia would bind RALF23, change its shape, and then bind LLG2. Instead, they found that LLG2 first binds RALF23 and presents it to Feronia.According to Dr. Chai “We were excited about the results, when we saw that RALF23 needs two distinct types of proteins – a receptor kinase (FERONIA) and an unrelated membrane-associated protein – to be recognized. The way these three proteins form an impressive perception complex might apply to other plant receptors that recognize peptide hormones.”

Dr. Zipfel added “FERONIA is a plant receptor that was actually identified at the University of Zürich over a decade ago by my colleague Professor Grossniklaus for its important role in reproduction, but has since been shown to play key roles in multiple plant processes. Now that we understand the molecular basis of how FERONIA can perceive RALF peptides, it will help characterize how this unique receptor controls several aspects of plants’ life.”

While scientists already knew that Feronia and LLG2 were somehow involved in the pathway to recognize RALF23, they didn’t know how these two proteins worked together. Having the actual structure of the complex let the researchers identify the critical parts of the different proteins, allowing them to confirm the structure and extend our understanding of this process by mutating these structures directly in plants.

The critical structures they identified in RALF23 are also present in several other RALF family members, suggesting that this interaction between RALF peptide hormones and LLG proteins will be conserved. This will enable different combinations of RALFs and LLGs to interact and be recognized by Feronia, thus enabling Feronia to trigger different physiological or developmental responses.

“Our understanding of how receptor kinases allow plants to perceive their world at a molecular level is progressing rapidly” concludes Dr. Belkhadir. “Diverse receptors can interact to trigger different responses, and this work shows that even the signals they perceive can first bind other proteins, providing an additional level of complexity. It will be important to determine how common this mechanism is, and then to work out the code that determines how different receptors, signals, and accessory proteins trigger are computed to help the plant make the most optimal decisions on whether to grow or fight off pathogens.”