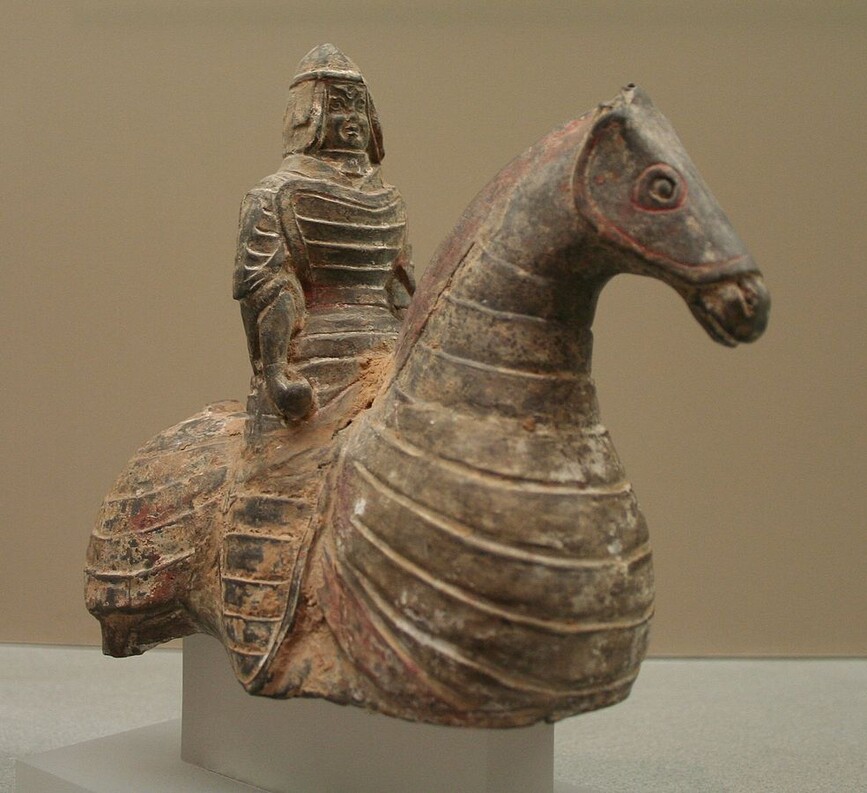 The year 220 AD marked a turning point in the history of ancient China: the 400-year-old Chinese empire of the Han dynasty collapsed and the so-called era of the Six Dynasties began: on the territory of the formerly unified country, different empires now existed side by side and each proclaimed the succession of the Han for itself. During this turbulent time, the steppe nomads, who had previously settled behind China's northern borders, also found their way into the former Han territory and established their own dynasties.

Thus, the Tuoba steppe people, a branch of the Xianbei, managed to rule northern China for more than a century as the Northern Wei (386–534). But long before they established this rule, the leader of the Tuoba already bore the title "Duke of Dai". This had been given to him as a reward for military support by the Western Jin dynasty (265-316). The term Dai referred to the Tuoba settlement area at that time, which is now the northern part of the Chinese Shanxi province and southern Mongolia. The seat of the Tuoba rulers was in Pingcheng (398-449), but their power rested on the shoulders of the men of Dai.

Who were the men of Dai?

The men of Dai are primarily described as elite riders; admission to the ranks of this cavalry unit was a privilege. Once a person was a member of the men of Dai, his origin played a secondary role. The warriors distinguished themselves mainly through their skills as mounted archers: "來大千，代人也。[...] 大千驍果，善騎射" [Lai Daiqian was a man of Dai. […] Daqian was brave and a talented horseman and archer] (WS 30, p. 487)

Although the members of other steppe peoples (who were subjugated by the Tuoba) were used as auxiliaries, they were not counted as comrades (guoren); they did not belong to the men of Dai. One could conclude from this that only Tuoba or Xianbei were admitted to the ranks of the men of Dai. Scott Pearce pointed out that in the Northern Wei dynasty it was mainly members of the elite who became part of the men of Dai. Thus, the ruler not only had a group of excellent fighters, but he had also separated them from their original clan structure and thus secured their loyalty, which was consolidated by regular hunting trips and the awarding of titles.

Under the Tuoba ruler Xiaowen, however, the situation changed. Unlike his predecessors, he was more devoted to the writings of Chinese scholars than to the military. He moved the capital to the more southerly Luoyang, not only leaving the Dai region behind but also the steppe nomadic warrior culture: hunting trips as well as the Xianbei language were banned. These changes were also reflected in the army, in which the Chinese infantry now gained importance.

But the fighters of the north were not forgotten; they shaped the image of warriors of the following generations, which was transmitted through literature and songs, for example in this verse from the song “Breaking a Willow-branch”:

A hero needs a horse that’s swift of foot,
And a horse swift of foot needs have a hero.
As hooves go thundering through the yellow dust,
I shall soon know who was the victor.
[Yuefu shiji, Vol. 2, 25.370; transl. Frodsham, Anthology, 108.]

Steppe nomadic identity is one aspect of Sandra Wabnitz’s PhD thesis, which she is writing within the ERC project HistoGenes.