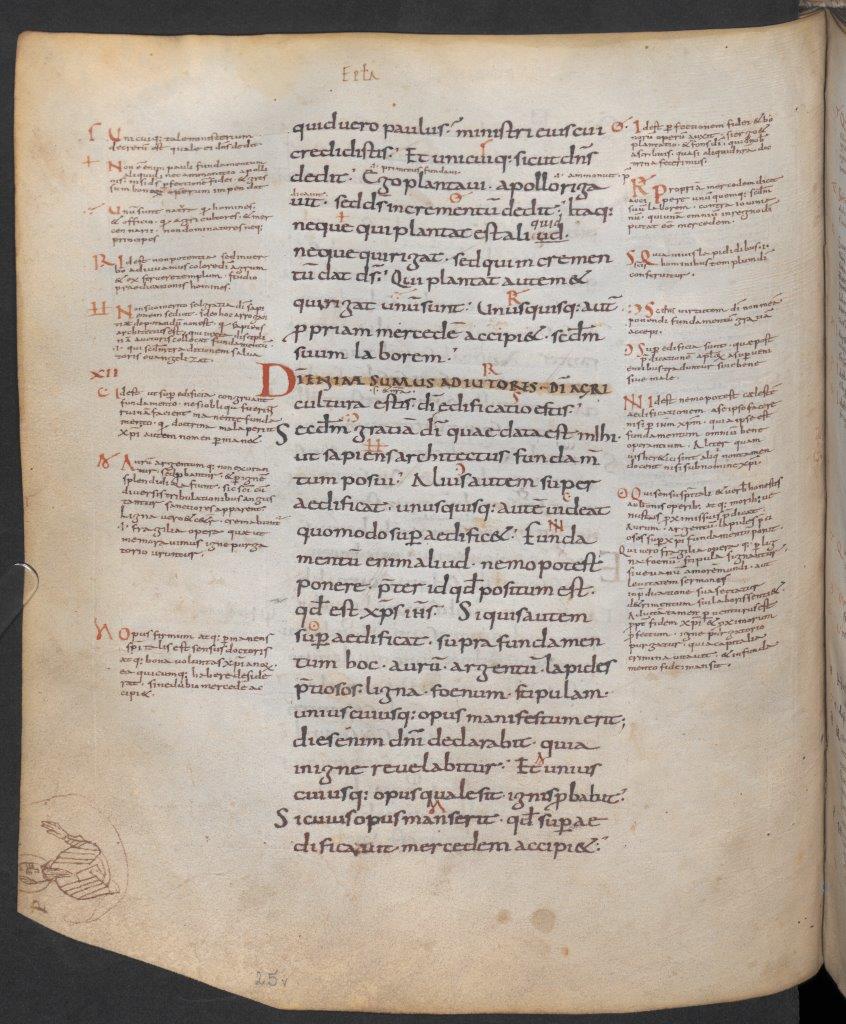 In recent decades, studies on medieval manuscripts have increasingly shifted their focus from the centre of the page, where the main text was copied, to its margins. These had hardly caught the attention of researchers and librarians before. The margins as well as the interlinear space of a manuscript page are important indeed and they rightly deserve this new appreciation within historical and philological studies. As the work done, for instance, by Mariken Teeuwen and Sinéad O’Sullivan clearly demonstrates, marginal notes – from scratched crosses up to extensive explanations – provide us with valuable clues in order to understand how medieval scholars approached, judged and re-used the texts they dealt with. In their various features and functions, marginal annotations usually convey an interpretation, which was meant to influence and guide any further engagement with the works to which they were attached. They served as a threshold to the text, to quote Gérard Genette, since they provided an access to its form and content. Thus, the margins were a privileged space for the activity of teachers and scholars who engaged with a given text both when preparing their classes and in their private study.

The margins of grammatical and biblical manuscripts will be the focus of my research over the next four years. In the context of an FWF project entitled "Margins at the Centre", which began last January, I will deal with ninth-century scholia and interlinear glosses added to Latin grammars as well as to specific copies of the Latin Bible from ca. 830 to ca. 900. I will concentrate primarily on the output of the East Frankish Kingdom. My aim is to investigate how Latin and the Bible were explained in Latin to an audience to which Latin was a foreign language and to ascertain whether the possible linguistic difficulties of pupils and readers of this part of the Carolingian Empire influenced the features of the explanations produced. The existence of a special East Frankish approach to Latin and the Bible has so far been asserted resting upon the ninth-century output in Old High German. Indeed, glosses, glossaries, even entire works in Old High German clearly show that some scholars did address their audience's peculiar difficulties with Latin by writing in the vernacular. It remains to be explored whether the far more numerous and extensive interpretations in Latin, which the same scholars often produced for the same audience, also reveal a peculiar, perhaps typical East Frankish pedagogical approach. This is what I wish to attempt with my project. To this purpose, I will deal with two different groups of manuscripts:

Firstly, I have started the analysis of glossed manuscripts of Priscian's Institutiones grammaticae from the East Frankish realm, a work which was employed for the teaching of Latin at a proficient level. In particular, I am currently transcribing the glosses contained in the manuscript Wolfenbüttel, Herzog August Bibliothek, Cod. 50 Weissenburg as part of a digital edition, which I am preparing with the help of the Austrian Centre for Digital Humanities of the ÖAW. This manuscript was written and glossed in the Alsatian monastery of Wissembourg around the year 850. It is very well known among Germanists, because it probably contains, among others, Otfrid of Wissembourg's autograph glosses, both in Latin and in Old High German. As such, the manuscript is regarded as a significant piece of evidence of the pedagogical activity at Wissembourg in Otfrid's time. But while its ca. 150 vernacular glosses have already been edited and thoroughly analysed, its ca. 2000 Latin glosses and the reasons behind the language-switching are still waiting for a similar study. I intend to fulfil this desideratum and to examine whether Otfrid and his contemporary colleagues produced interpretations of the Latin grammar that were possibly tailored to the needs of their students, thus bearing witness to what might be called a "Latinitas Germanica". The analysis of all the glosses contained in this manuscript will show the key topics of the local teaching of Latin and the level of expertise expected from the pupils.

Secondly, I will engage with commented editions of the Bible produced in Carolingian Europe until ca. 900. These are manuscripts, which were ruled in order to contain both the text of the Bible and a rich corpus of pertinent explanations on each page. Commented editions of the Bible dating to the Carolingian period feature a standard three-column ruling pattern, in which the Bible occupies the central column and the annotations flank it on both sides. Up to now, I have traced twenty-four manuscripts or fragments of this sort. Remarkably, fifteen of them originated from East Frankish scriptoria. I aim to explore the reasons for this particular spread in East Francia and to verify whether this book format, which provided the readers with both the text of the Bible and related explanations on the same page, better met the needs of the local audience.

Particular attention will be paid also to the fact that one half of the Carolingian commented editions, that is twelve out of the twenty-four items of my list concern the Psalms. The manuscript evidence shows that the St Gall scriptorium became a hub for the creation and dissemination of commented editions of the Psalter, which were usually equipped with short annotations surrounding the text of the Bible, narrative drawings, and prayers intended for private devotion. As Margaret Gibson remarked, they were possibly created at the request of lay commissioners. Conversely, other commented Psalters, and particularly those produced in the West Frankish region, have completely different features, as Silvia Cantelli Berarducci has shown, and addressed probably the clergy.

The content and sources of the marginal annotations, the paratext framing each commented edition, the traces of use left by its contemporary readers provide us with clues in order to understand case-by-case which was the audience addressed originally by these books. As for the manuscript I am studying at the moment, the function and intended audience of the explanations varied within the commented edition itself. I refer to the manuscript Wien, Österreichische Nationalbibliothek, Cod. 1239, produced at Wissembourg in the last decades of the ninth century and containing both the Pauline and the Catholic Epistles. Probably, this commented edition was originally conceived as a reference book to be held and read at the local library, but several changes occurred during the process of glossing. Indeed, the annotations differ as for the sources they reproduce as well as for their length, density and function, depending on the Epistles they comment upon. I have distinguished three stages of annotation and three corresponding bulks of scholia, each displaying peculiar features. The explanations of the first 25 folios, containing Paul's Epistle to the Romans and his First Epistle to the Corinthians up to the middle of chapter 3, form the first homogeneous set. A further group contains the scholia on the rest of Paul's Letters. A third and final group gathers the explanations on the Catholic Epistles, which differ considerably from the others. If the first two groups aimed at providing the reader with a concise explanation of each verse and most likely addressed a proficient audience, the annotations attached to the Catholic Epistles were mainly concerned with explaining both the meaning of a few single words and the syntax of the Latin Bible to beginners. Only this third, more elementary bulk of glosses features words in Old High German. Curiously, a small picture of a man blessing or simply addressing an imagined audience marks the transition from the first to the second group of annotations on the bottom of f. 25v (Fig. 1). It is the Apostle Paul himself, as his receding hairline, his nimbus, his Roman toga, and the capital “P” at his side denote.

Further work on this and the other manuscripts of my list will increase our knowledge on the features of Carolingian commented editions and hopefully explain the reasons for their particular spread in the East Frankish realm. It is plausible to assume that this book format, featuring the biblical text with a related compendious explanation on each side, was chosen by a network of East Frankish scholars to support a part of their audiences in facing their difficulties with Latin. Depending on the nature, sources, and quantity of their annotations, commented editions could support either beginners or proficient students of the Bible in their theological training or again provide the laity with useful thoughts for their private devotion.

Cinzia Grifoni, "Commented editions of the Bible in Carolingian Europe and Otfrid's approach to the Book of Isaiah", in Practices of Knowledge Selection in Early Medieval Manuscripts, ed. Anna Dorofeeva and Michael Kelly, forthcoming.

Sinéad O'Sullivan, "Text, Gloss, and Tradition in the Early Medieval West: Expanding into a World of Learning", in Teaching and Learning in Medieval Europe. Essays in Honour of Gernot R. Wieland, ed. Greti Dinkova-Bruun and Tristan Major (Turnhout, 2017), 3-24.

Margins at the Centre