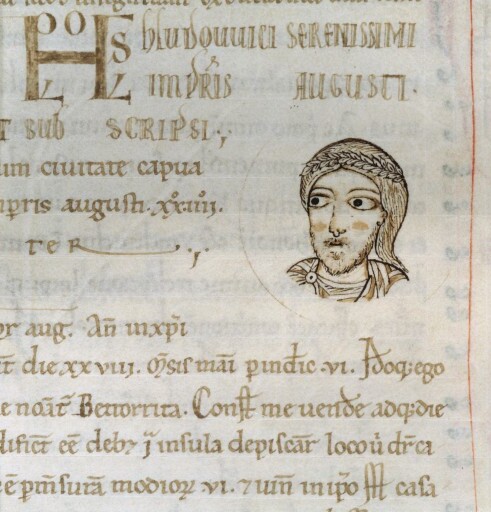 “We buy things we don't need with money we don't have to impress people we don't like.”
― Chuck Palahniuk, Fight Club

On 5 April 868, Louis II bought a house in Rome. Louis II was a Carolingian and great-grandson of Charlemagne. He had at the time been emperor for 18 years. Before then, he had already been sub-king of Italy since 840 for his father, Emperor Lothar I.

With the charter, Louis made a rather strange purchase: for no less than 800 pounds of silver, he bought part of an obviously sizeable house in Rome (coming with a garden and a chapel of St Blaise) and a property in the countryside by a lake. As this whole possession was passed on a few years later to Louis’ monastery San Clemente in Casauria, the charter was copied into the monastery’s collection by the monk, John Berardus, in the late 12th century. The monk could not help but comment that this purchase had been made for a remarkably high sum (cum infinita pecunia).1 As emperor, Louis already had a palace near the church of St Peter – and had he wanted to reside inside the city walls, which he never did as far as we know, he would surely have wanted to take lodgings on the Palatine. As the monastery he eventually gifted with these estates after 871 did not exist in 868, it is puzzling why the emperor would have bought them in the first place. Did he in fact buy it simply to be able to claim that he possessed a townhouse in the Eternal City? Our only chance to find out more seems to be looking more closely at the vendor – a certain Peter, resident of Rome.

The charter itself is peculiar in several respects: First, it was drawn up by the seller:

In the name of our Lord God and saviour Jesus Christ. Louis, by divine decree and foresight emperor and augustus, in the 19th year, by the grace of God, of his rule, on the fifth day of April, in the first indiction. To you, my Lord, Louis, most glorious emperor. I Peter, resident of the city of Rome, son of the late Karolus, …2

While the charter is dated by Louis’ imperial years – possibly getting them wrong by a few days, as his coronation in 850 is believed to have happened in the course of April – Louis is addressed as recipient of the document. Only after that, the vendor names himself as Peter, resident of the city of Rome, son of the late Karolus. We possess very few private charters3 from Rome, which means that we can hardly say whether the form chosen was standard or rather tailor-made for the exceptional situation. As it is now, Peter’s self-representation is intriguing: Peter was quite a common Roman name, but his father’s name, Karolus, certainly was not. At least the name’s origins were Frankish without a shred of doubt, and it will have been considered the most Frankish of names at the time Peter’s father was born, probably early in the ninth century. We could now speculate whether this Charles had been born to a Frankish parent. It is problematic to take this for granted, though, as the suspected time of his birth would also have been exactly the period when Roman parents, following our modern logic, would have been most likely to employ that very name. We may assume, however, that the family would not have been opposed to the Carolingians at that time.

Apart from this, Peter calls himself ‘resident (abitator) of the city of Rome’. This is striking in comparison with the Roman witnesses at the end of the document, who were:

All of them were members of the Roman elite. The second John in the list was, as duke, even head of the Roman militia and civil government. All of them either specified that they were of Roman origin or that the lived by Roman law. With less information at our hands, we would probably assume the legem viventem category to be somewhat inferior, but as the dux himself used it, we may safely doubt that those two designations brought a real difference in the legal status of the individuals. It is interesting that the last two persons on our list clearly bore Germanic names like Peter’s father, possibly thus stemming from the same peer group.

None of the witnesses, however, were ‘mere’ residents. Was Peter thus of inferior social or political status? We may strongly doubt that as well. Not only did those prominent Romans step up for him in this important sale. He also names himself once more towards the end document. There, he acknowledges the reception of the silver for the purchase as Petrus in Dei nomine consul et dux (Peter in God’s name consul and ‘duke’). While consul et dux despite the sound of it did not mean that he held any real office in the city, this expression was used exclusively by Romans of the highest possible rank. Could it be that Peter was member of the highest society stratum – and still not considered a full citizen? As he disappears from history after this document, we will never surely know.
The question remains why Louis bought Peter’s property, which does not seem to have been a real bargain. Was it just to have a foot in the door in Rome inside the walls? Was it maybe to make an impression on the papal government, some members of which the emperor surely did not like, thereby fulfilling the Palahniuk quote above? Though we cannot rule out this explanation, it was hardly the case. We still need to take the political situation in Rome and Italy into account. The few months preceding the purchase charter had indeed been tough for Rome: in December 867, Pope Hadrian II had been elected obviously without imperial consent and without the imperial envoys present. Lambert of Spoleto, one of the highest-ranking imperial vassals had occupied and plundered parts of Rome in reaction and acted as its lord for several days until an agreement had been reached. During this very unfriendly visit, it will have happened that people with connections to the imperial side came to harm just like other Romans. Most likely, Peter was somehow afflicted as well, and the purchase was meant as compensation. It would only be logical that the emperor could not admit to any wrongdoing by himself or his servants, but would rather smooth things over by paying off someone with strong connections both in Rome and, it seems, in the Frankish world.

The property was then passed on to Louis’ newly founded monastery in the Abruzzi sometime between 871 and 874. As this monastery had been founded in reaction to the emperor’s release from captivity in Benevento in September 871, this was rather, in all probability, done out of convenience, but had not been preconceived in 868. The inclusion of this Roman private charter was thus a happy coincidence for us historians, as it grants us as a rare glimpse at developments between Rome and Frankish empire and introduces, however briefly, a second, but far less prominent ‘Peter of Rome’, friend of the Franks.

3 Private charters are called that in diplomatics, if the charter is issued neither by an over regional ruler (king, emperor, another sovereign) nor by the papal chancery.