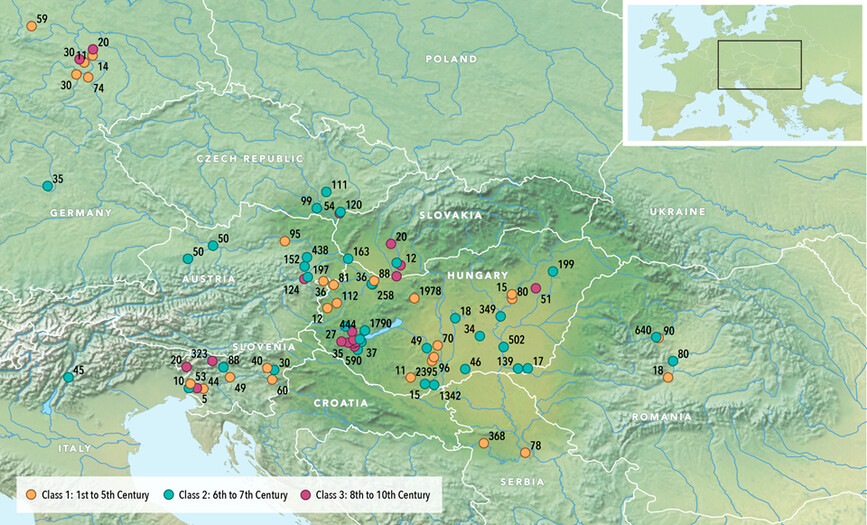 On May 1st, 2020, a large project will begin, coordinated by the Institute for Medieval Research. It is called ‘Integrating genetic, archaeological and historical perspectives on Eastern Central Europe, 400-900 AD’,in short, HistoGenes. It is a Synergy Grant that has been selected for funding by the European Research Council in a highly competitive three-stage process which took almost a year. The project duration will be six years. It is a huge interdisciplinary project that consists of four principal investigators with their institutions: apart from myself, hosted both by the Austrian Academy of Sciences and the University of Vienna, there is one geneticist (Johannes Krause at the Max Planck Institute Jena), one archaeologist (Tivadar Vida at ELTE – University of Budapest) and another historian (Patrick J. Geary at the Institute for Advanced Study in Princeton). Seven further beneficiary institutions and numerous researchers will participate, among them, physical anthropologists at the Natural History Museum Vienna, an archaeogenetics lab in Budapest, Corina Knipper’s team at the archaeometrics centre in Mannheim, and a team of population geneticists around Krishna Veeramah at Stony Brook, New York. All disciplines that can help us to trace the population history of Eastern Central Europe will be involved, both in the Natural Sciences and the Humanities.

Chances and risks of archaeogenetics

This is the first archaeogenetics project in which historians are involved from beginning to end, collaborating with geneticists and archaeologists from the project design and the selection of pertinent historical questions to the interpretation of the data. Why is this so important? Over the centuries, different scholarly disciplines were believed to be able to tell people who they ‘really’ were, and where they belonged: theology, philosophy, history, and psychology. Today, many people expect the answer to this fundamental question from genetics. Some companies exploit such expectations, offering to tell people that they are descended from exciting peoples of the past such as Celts, Romans or Vikings, and thus taking them back to 19th-century fantasies about distant ethnic origins. National identity politics are harnessing genetic research to their ideological goals. Even leading geneticists see no problem in identifying genetic clusters that emerge from their data with historical peoples. This is where historians have to intervene. Since 1945, we have collected massive evidence that belonging to a people is not simply determined by biological origin, but depends on historical developments and on cultural concepts of community.

Of course, much of how we are as individuals is in our genes. Yet the question in the background of our project is: to what extent do our genes determine to which social groups we belong? This is a key methodological issue, so far hardly addressed critically in archaeogenetics. Ancient DNA analysis has made spectacular progress and can now be applied to historical periods. The historical conclusions from genetic data have, however, not kept pace. There is an urgent need to develop a proven method for the historical interpretation of genetic evidence. This requires balancing three different perspectives: Textual sources define emerging peoples by ethnonyms and describe their migrations. Archaeological finds allow tracing groups of shared cultural habitus. And on the basis of genetic data, biological similarities and differences between individuals can be modelled. We have to avoid any short-cut identifications between the groups reconstructed by these three different methods, because we cannot take for granted that the collective names found in texts coincided with the cultural groups and genetic clusters emerging from excavations and DNA data. Only at the end, we may be able to arrive at a valid hypothesis how much these three categories may have overlapped in which case.

Transformations inEastern Central Europe after the end of Roman rule

HistoGenes addresses one of the formative periods in European history: between c. 400 and c. 900 CE, medieval Europe emerged after the dissolution of the Western Roman Empire, in a process that involved migrations and demographic change, the rise of post-Roman Christian kingdoms in the West and of non-Roman ‘barbarian’ societies in the East. Traditional scholarship assumed that in the ‘migration period’, Völkerwanderung, between Antiquity and the Middle Ages, entire peoples wandered across Europe. This image has been successfully challenged. Scientific methods can now help us to find out much more about the shape and impact of migrations in one of the regions most affected by it. Did the population of East Central Europe essentially remain unchanged, while different migrant groups came, ruled for some time, and disappeared again? Or did populations actually shift in the process?

The case study: the Carpathian Basin in the 5th-9th centuries

This is a very promising case study to explore the potential and the problems of the interdisciplinary approach at the basis of HistoGenes. The Carpathian Basin, the region along the Middle Danube roughly between Vienna and Belgrade, is the region in Europe with the highest number of migrations, changing rule and population shifts attested in the written sources in the period. Pannonians, Romans, Goths, Huns, Longobards, Gepids, Avars, Bulgars, Slavs, Franks and many other ethnic groups are mentioned as living in this area or migrating there. Many of them practiced burial of their dead with grave goods, which provides us with an exceptional wealth of burial evidence. Over 100,000 graveswith grave goods have been excavated from the period so far, and many of them have already been published. In our project, we will gain new insights about many aspects of their lives, such as the role of kinship, sex and gender, social status and hierarchies, the incidence of war and violence, nutrition, working conditions, and the relations between them. We will also study their health: anthropological and genetic analysis of pathogens will show which diseases affected them. Were they hit by the Justinianic Plague in the 6th century? I will write more about this aspect of the project, which has unexpectedly become very relevant in recent weeks, in this blog on May 15.