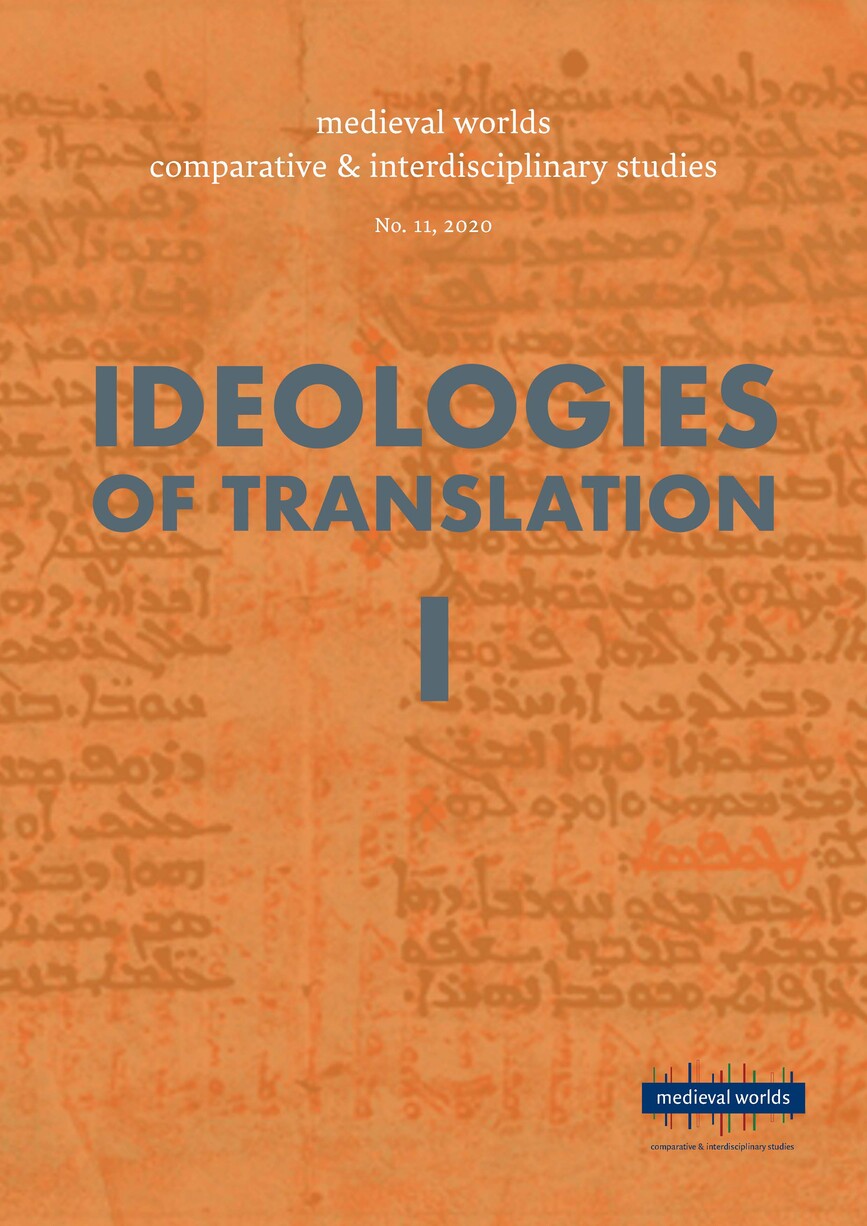 On 1 July, volume 11 of Medieval Worlds entitled Ideologies of Translation, I was published online.

In this issue we present the outcomes of a research initiative undertaken by our colleagues Pavlína Rychterová und Christian Gastgeber at IMAFO, which was based on the ERC project “Origins of the Vernacular Mode. Regional Identities and Textual Networks in Late Medieval Europe (OVERMODE)” (2011-2017), successive conference presentations on the politics, “professional” translators and cultural dynamics of translations at the International Medieval Congress (IMC) in Leeds 2013, as well as the follow-up project COST Action IS 1301 “New Communities of Interpretation.  Contexts, Strategies, and Processes of Religious Transformation in Late Medieval and Early Modern Europe”. In the course of the ongoing research initiative, a close exchange network was established with the Cardiff conferences focusing on the theory and practice of translation in the Middle Ages (The Medieval Translator). The 11th Cardiff conference was thus hosted in Vienna in 2017. The result of the continuous in-depth collaboration and discussion led to this fine selection of articles, all of which investigate different technologies, politics and cultures of translation from ideological as well as practical perspectives, as Pavlína Rychterová points out in her opening article “Instead of an Introduction: Medieval Europe Translated”.

In the section Technologies of Translation, Christian Gastgeber traces the development of language use in the imperial chancery of Constantinople from Justin II to Leo III. Greek was increasingly preferred and started to replace Latin in documents that addressed the entire empire and, in a final stage, in imperial documents directed to Western addressees. To illustrate this process, the respective documents are discussed insofar as the preserved texts allow the drawing of safe conclusions about their original language and the stages of its development. Elvira Wakelnig contributes a critical perspective on a key concept of Galen’s thought, “nature” (physis), and how this Greek physician uses it in many ways and with different meanings. She demonstrates the great awareness of the polysemy of the term physis that late antique commentators as well as Arabic translators show – since almost the entire corpus of Galen was translated into Arabic in the ninth century CE. In Jan Odstrčilík’s paper he deals with the wide-ranging influence of Diego Collado’s linguistic works, which is built on Dominican missionary activity in the Christian Century in Japan. The author addresses not only questions of language but also of genre and culture.

Alexander Fidora’s paper in the section Politics of Translation addresses the question of how the Latin translation of the Talmud, known as the Extractiones de Talmud (1245), is related to the changing perception of the Jews during the thirteenth century. It draws particular attention to Pope Gregory IX’s description of the Talmud as an alia lex, as he called it, which depicts the Jews as heretics, and shows its far-reaching consequences for the legal status of the Jews. Constanza Cordoni traces Jewish literary production through changing contexts. Following the early commentary on the book of Exodus in the Mekhilta deRabbi Yishmael (third century CE), a series of later rabbinic texts with other exegetical agendas praise the children of Israel for remaining loyal to their language identity during the time of the Egyptian bondage. This tradition is found both in Hebrew and in Hebrew-Aramaic rabbinic corpora of the classical period before it is taken up in early medieval works.

The third section, Cultures of Translation, features Pascal Hugon’s analysis of the corpus of epistemological treatises composed by Indian Buddhist scholars that was translated from Sanskrit into Tibetan in the two phases of the diffusion of Buddhism to Tibet – the early phase in the seventh to the ninth centuries and the later phase starting in the late tenth century. Her study is based on lists of translated works in various catalogues compiled in these two phases and the contents of the section “epistemology” of canonical collections (Tenjur). Andrea Acri and Thomas M. Hunter discuss the dynamics of translation and exegesis documented in the body of Sanskrit-Old Javanese Śaiva and Buddhist technical literature of the tutur/tattva genre, composed in Java and Bali in the period from c. the ninth to the sixteenth century. The texts belonging to this genre, mainly preserved on palm-leaf manuscripts from Bali, are concerned with the reconfiguration of Indic metaphysics, philosophy, and soteriology along localized lines.

Finally, Beatrice Gruendler and her team at the Freie Universität Berlin present an interim report on the editorial and analytical work of the AnonymClassic Project. She and her co-authors discuss various aspects of their work on the textual tradition Kalīla and Dimna. Beatrice Gruendler provides a general introduction to the questions being considered. This is followed by a number of short essays in specific areas, organized into three categories: codicology, literary history and theory, and the digital infrastructure of the project.

We hope that this short overview has caught your interest. If you would like to browse Medieval Worlds 11 or earlier issues just visit our website: http://www.medievalworlds.net.

Medieval Words 11: Ideologies of Translation, I

Christian Gastgeber
The Byzantine Imperial Chancery and its Language Policy from Justin II to Leo III (Sixth-Eighth Centuries): From Latin to Greek

Constanza Cordoni
“For they did not change their language” (MekhY Pischa 5): On the Early Medieval Literary Rehebraicisation of Jewish Culture

Andrea Acri and Thomas M. Hunter
Translation as Commentary in the Sanskrit-Old Javanese Didactic and Religious Literature from Java and Bali