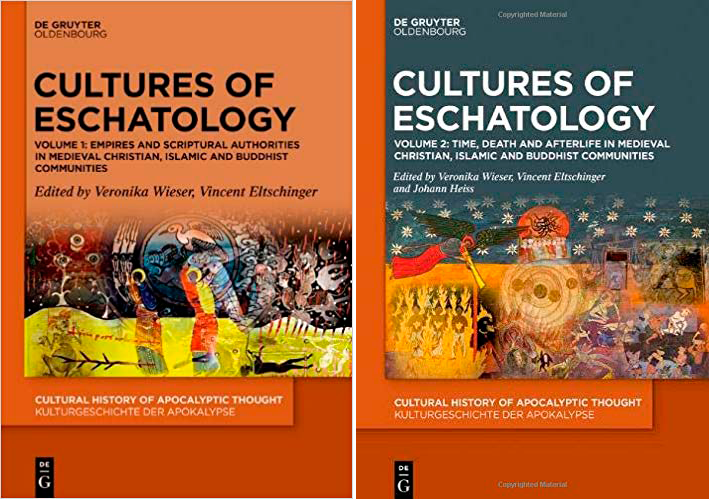 We are happy to announce that the two volumes of Cultures of Eschatology have been published with De Gruyter this July. The volumes explore the many ways apocalyptic thought and visions of the end intersected with the development of pre-modern political and religious communities, with social changes and with the emergence of new intellectual and literary traditions. Over thirty contributions bring together topics that are central to the belief in the Last Things, ta eschata, such as death, resurrection and afterlife, the end of time and musings about the transience of the world or of an empire. The first volume, Empires and Scriptural Authorities, examines the formation of literary and visual apocalyptic traditions, and the role they played as vehicles for defining a community’s religious and political enemies. The second volume, Time, Death and Afterlife, focuses on key topics of eschatology: death, judgment, afterlife and the perception of time and its end in the Middle Ages. It also analyses modern readings and interpretations of eschatological concepts.

In all religions, in the medieval West as in the East, ideas about the past, the present and the future were shaped by expectations related to the End. Such beliefs in the Last Things have been integral to Judaism, Christianity, Islam, Hinduism and Buddhism, especially in the pre-modern era, and range from the final battle between good and evil and the dawn of a new, divine order to death, divine judgment and eternal afterlife. They also include the dreadful tribulations that every human will supposedly have to face before salvation. In the medieval West as in the East, eschatology seems to have been part of the foundation upon which societies were built. This period is often associated with anticipation of the Second Coming of Christ (parousia) or the advent of messianic figures such as the Hindu Kalkin and the Buddhist Maitreya that could bring both hope and fear. There was also a strong concern with the dates and exact circumstances of these events. In Islamic eschatology, stories about death, the afterlife, and the end of the world play a vital role in the Qur’an and ḥadīth literature, reminding believers that earthly deeds had an everlasting impact on the fate of the soul.

In the Middle Ages, ideas regarding the end of the world and the advent of messianic figures developed alongside chronological models, revelatory literature, apocalyptic imagery from holy texts and the ongoing process of commenting on them, particularly in exegetical and historiographical
works. These visions can not only be seen in a wide variety of theological and historiographical sources but also in hagiography, sermons and poems, and even in sources that we would nowadays group under the moniker of “pragmatic texts”, such as charters and maps. Prophetical texts in the Bible and in the Qur’an – such as the Books of Daniel and Ezekiel, the Revelation to John, sura 18, 33, 41 and 81–84 – offered key tools to decode God’s plan for the community of believers. This plan would be revealed at the end of time, but would also be presaged on earth by signs and wonders. These texts provided central models for the medieval perception of the world and its peoples, for the interpretation of socio-political changes, for the understanding of astronomical and natural phenom-ena, and for the individual’s path to salvation.

In much the same way, narrative and/or normative Hindu literature such as the Manusmṛti, the Mahābhārata and the Purāṇas record End-Time-related interpretations of the health and morality of Brahmanical society, the legitimacy and relevance of royal policies, taxes, life expectancy, and cosmic and military events etc. At the same time, these bulky documents provided the Brahmanical elites with a rich repertoire of ready-to use images and symbols that could give meaning to people’s social, economic, political and religious experiences. This also applies to Buddhist canonical literature,
which the Buddhist literati constantly resorted to in order to locate the present on the “timetables of decline”, to find criteria to estimate the degree of the community’s degeneration and to develop potent rhetorical tools to enjoin its repristination.

Eschatology is often perceived as being inextricably connected to monotheistic religions, especially to the revelatory religions of the Book and their linear concept of time. However, eschatology and the drive to give history meaning by reference to existing prophecies and scenarios of the end are also integral to Hinduism and Buddhism, in spite of the fact that these religions operate with cyclic time. For, cyclic as time may be, the periods in which it unfolds are so big that their repetition makes no difference in terms of the devotee’s and the community’s conception of their present-day experience. Thus, Hindus and Buddhists throughout Asia engaged in sophisticated calculations concerning the beginning and end of the kaliyuga, the advent of Maitreya or the final demise of Buddhism.

Given the plethora of topics and different approaches, eschatology and apocalypticism constitute a dynamic field of research and have received much scholarly attention over the past forty years, especially from the beginning of the new millennium onwards. Cultures of Eschatology aim to introduce new, pre-modern perspectives to the field by comparatively addressing eschatology and apocalypticism in Christian, Islamic and Buddhist communities. While many studies so far have focused primarily on Europe, Cultures of Eschatology actively engages in cross-cultural comparison in order to shed light on specific literary, iconographic, intellectual and religious traditions. Apocalyptic thought is analysed from a multi-disciplinary and “trans-areal” angle, including contributions from history, social anthropology, religious studies, Christian theology, art history and philology.
Through expanding the geographical scope from medieval Europe to the Mediterranean world, the Near East and Asia, including India, Tibet, China and Japan, the contributions seek to come closer to an understanding of: how apocalyptic thought influenced and factored into the political and religious perception and self-definition of communities; what role it played in the construction of a community’s identity or in the perception of an “other”; how eschatology contributed language, images, metaphors and models for framing history; how it impacted on individual perspectives on life, the world and the afterlife.

The two volumes present a wide variety of case studies from the early Christian communities of Antiquity, through the times of the Islamic invasion and the Crusades and up to modern receptions in the twentieth and twenty-first centuries, painting a multi-faceted picture of End-Time scenarios. The geographical focus of the contributions spans from Carolingian Spain to the Byzantine Empire and from South Yemen to the legendary Caspian Gates, and also encompasses the Hidden Lands of Tibetan Buddhism and Japanese Shintō culture. The case studies draw on material from various historical contexts. They include the results of new fieldwork carried out in Tibet, India, Italy, Greece and Turkey, as well as new findings from the study of ancient and medieval manuscripts – such as translations of newly found or underappreciated sources as well as a first critical edition of one recension of a well-known apocalyptic text – or of material culture.

In pre-modern societies, apocalyptic expectations and eschatological visions generated different per-spectives on time, history, and the world itself. Eschatological ideas on temporal mutability, the transience of the world and political communities were often used to explain periods of political transition, scenarios of social decline or catastrophic events. Individuals and earthly powers, king-doms and nations were thus subject to a divine plan. Examining apocalypticism, messianism and eschatology in medieval Christian, Islamic, Hindu and Buddhist communities, provides a unique op-portunity to reflect on the various ways in which divine presence was felt in the course of history.

The project from which these two volumes originated was part of the research cluster “Visions of Community: Comparative Approaches to Ethnicity, Region and Empire in Christianity, Islam and Buddhism (400–1600 CE) (VISCOM)”, funded by the Austrian Research Fund (FWF).