In the first instalment of the "brainfood" event series, Dariusz Jemielniak presents the results of his longitudinal ethnographic study of the Wikipedia community and speaks on the meaning of conflict for participatory communities. 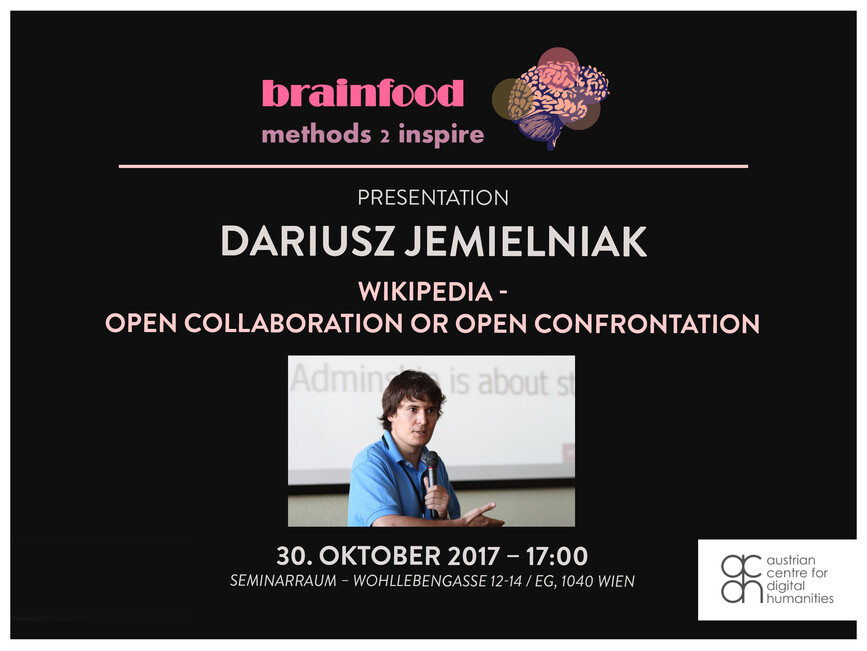 As the first guest of the ACDH-based event series "brainfood. methods 2 inspire", which, in the context of explore.AT!, aims to stimulate experimental scholarship and foster innovation in the Humanities, Dariusz Jemielniak will present the results of a longitudinal, qualitative, ethnographic study of the Wikipedia community (en-wiki and pl-wiki).

Conducted 2006-2016 and about to be published in a forthcoming book later this year, the study draws on Dariusz' experience as an active participant in the Wikipedia community in several different roles (admin, bureaucrat, steward, etc.). In his talk at the ACDH, he will present an analysis of typical conflict trajectories on Wikipedia, using the so-called critical case analysis and basing the discussion on the longest and 'most epic' edit war in the history of English Wikipedia, that is, the infamous Gdańsk-Danzig war, which he analyzed edit by edit and comment by comment (over 400 thousand words).
Dariusz research shows that conflicts are not only inevitable on Wikipedia, but that they are an important reason for making people edit. Conflicts increase the stakes of staying in the community and escalate the commitment, and they are persistent exactly because of the way the social system of Wikipedia interactions is designed: breaking the rules results in blocks, so the only way to win an argument is to add sources and repeat one's view long enough. Nevertheless, the trajectories of conflicts - of which Dariusz will describe the four most common ones - are far from optimal, often resulting in editors' exhaustion and eventual resignation (especially in the case of new editors, whose commitment has not escalated yet). In the presentation Dariusz is going to offer several possible tweaks and lessons from other participative communities and open collaboration methodologies (action research, Mondragon, etc.).

Dariusz Jemielniak is a full professor of management at Kozminski University, a co-founder of the NeRDS (New Research on Digital Societies) group, a Berkman Center for Internet and Society fellow at Harvard University and visiting scholar at MIT Center for Collective Intelligence. He is also a member of the Board of Trustees of the Wikimedia Foundation.