The 2022 edition of the Media Pluralism Monitor was presented on June 30 in Florence. The Austrian Report sees a high risk for concentration of media markets and independence of ORF governance. 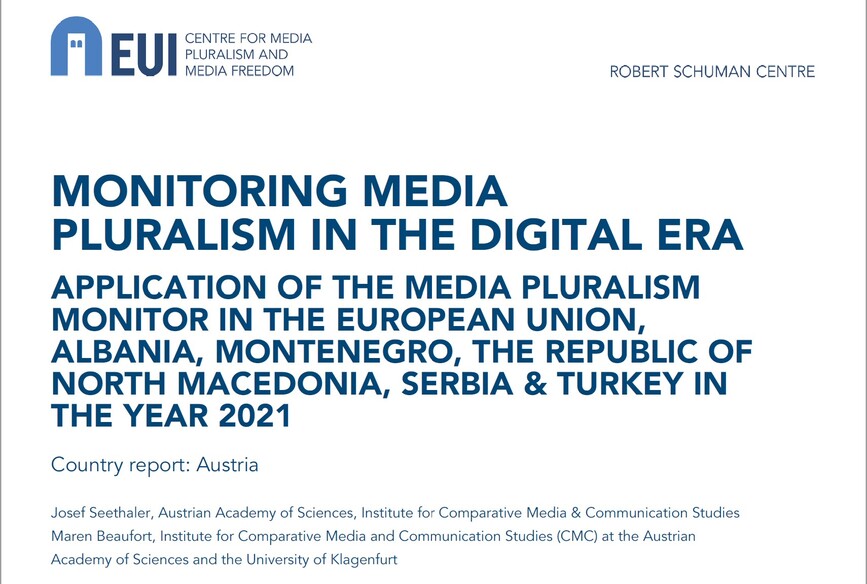 For the sixth time, Josef Seethaler and Maren Beaufort have authored the Austria report of the EU-funded Media Pluralism Monitor on behalf of the European University Institute, Florence. The Media Pluralism Monitor (MPM) is a key source of information for the European Commission, which relies on the findings to draw up its yearly Rule of Law Report. The MPM has been developed by the Centre for Media Pluralism and Media Freedom at the European University Institute to assess the potential weaknesses in national media systems that may hinder media pluralism. Based on 20 indicators, summarizing 200 variables, it covers four areas: fundamental protection, market plurality, political independence, and social inclusiveness.

Media market concentration, measured by Top4 indexes for market revenues and audience, is between 71 and 90% in the audiovisual, radio and newspaper sectors (data from 2021), and the leading online news media owners (in terms of audience share) are also occupying leading positions in other sectors. Thus the market share of the Top4 news media owners across different media markets is 63% (based on 2020 data on the twenty largest media companies tax-registered in Austria, provided by diemedien.at). Considering the legal provisions, two weak points become apparent. The first problem is that only legislation for the audiovisual and radio sectors contains specific restrictions regarding areas of distribution and market shares to prevent horizontal and cross-media concentration; such restrictions do not exist for other media sectors. The second problem is that even these restraints – and also the media-specific merger control provisions in cartel law (Bundesgesetz gegen Kartelle und andere Wettbewerbsbeschränkungen, 2005/2021, Section 13) – are not very tight. As a result, Austrian media and cartel laws, although they give market plurality a guiding priority, have been ineffective in preventing mergers of media companies – from the Mediaprint deal in 1988 (a joint venture of the owners of the two biggest newspapers at the time, Kronen Zeitung and Kurier) to the 2017 merger of the two biggest private TV stations, ATV and PULS 4, both of which are now owned by the German ProSiebenSat.1 group (in which MediaForEurope, formerly known as Mediaset and controlled by the family of former Italian Prime Minister Silvio Berlusconi, has increased its stake several times and is now the company's largest shareholder and just below a blocking minority).

Regarding the independence of PSB governance, there are two fundamental problems:

(1) The ORF Act (Section 20 (1) and (3)) seems to provide objective and transparent appointment procedures for the management and board functions in PSB by prescribing a variety of qualifications and detailed incompatibility rules for being elected as a member of the "Stiftungsrat" (Foundation Council), the main management body of the ORF, which appoints all high officials, approves the budget, and controls the financial conduct. However, the incompatibility of numerous political functions, ranging from ministerial office to employment with a political party, with a membership to the Foundation Council relates only to the four years preceding the appointment. But most importantly, Section 20 (1) gives the federal government and the provincial governments much power in appointing the foundation council members: Fifteen of its 35 members are appointed by the federal government, six of which in consideration of the proportionate strength of the political parties represented in parliament. Moreover, each of the nine Austrian federal provinces nominates a representative. A further six members are delegated by the Audience Council, the majority of whose members are in turn appointed by the Federal Chancellor (ORF Act, Section 28 (3)). Overall, these appointment rules enable the government to appoint at least a simple majority of the 35 members of the Foundation Council. Such a simple majority is sufficient for most of the decisions of the Foundation Council, including the appointment of the Director-General and the directors. This 'politics-in-broadcasting system' is the basis for the entanglements between PSM and political actors and is highly questionable from a democratic perspective. Thus, the appointment procedures for the Foundation Council are, in practice, strongly impacted by political parties, particularly governmental parties. Recently disclosed "side letters" of several government agreements confirm this assumption.

(2) The ORF Act (Sections 20 (6), 21 (1) and 24 (1)) aims to provide fair and transparent appointment procedures for the Director-General, the four directors, and the nine regional directors of the PSB. There is, however, criticism of the provision that resolutions of the "Stiftungsrat" (Foundation Council) "shall be passed by open vote" (Section 20 (6)). In practice, this allows political actors to directly influence the appointments and dismissals of all directors, as it is to be expected that the so-called "circles of friends" of the various political parties vote along the respective party line.