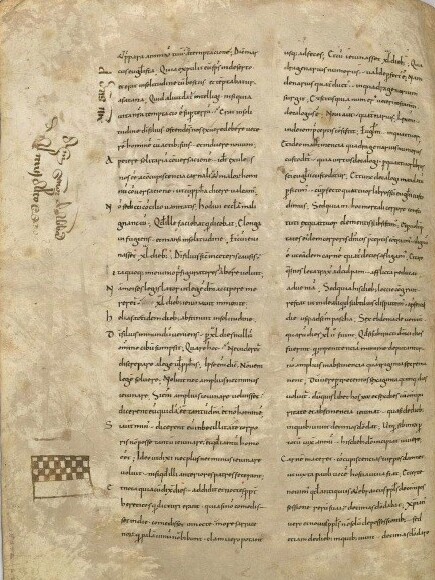 The expansion of the Carolingian Empire towards new territories entailed the spread of its own cultural, religious, and intellectual programme into these regions. This implementation did not result in the replacement of the previous identity or culture, but rather in a hybridisation or complementation of both, a constant conversation between the previous autochthonous substrate and the new Carolingian superstrate. This particular scenario is even more fascinating in peripheral regions like Septimania and Catalonia (the so-called Spanish March), which not only experienced the combination of an old Visigothic background and Carolingian-Frankish culture, but were also located at the gates to the Muslim World in Europe. In this context, we find the case of the highly popular Carolingian Homiliary of Luculentius, which emerged within and was circulated across Catalonia and Septimania.

Angelo Mai originally discovered the first eighteen homilies under the name of Luculentius in two twelfth-century manuscripts of Rome: Vaticanus latinus 6081 and Biblioteca Vallicelliana, Tomus XX. He published them in Scriptorum Veterum nova collectio, vol. 9, Rome 1837 (also published in Patrologia Latina 72, cols. 803–60). Later, in 1911, Alfons Müller found and published another homily which is attributed to Luculentius in the above-mentioned Vaticanus latinus 6081. According to the scant sources which were available, Luculentius was thought to have been an Italian writer who lived in the seventh century. Nevertheless, later discoveries of manuscripts containing Luculentius’ homilies in the twentieth century point to a different origin and context.

At present, we have identified more than one hundred witnesses that contain some of Luculentius homilies, the majority of which were spread and copied across Catalonia, most of them older than the ones studied by Angelo Mai and Alfons Müller. The most important manuscripts are the mid-tenth century ms. 17 and ms. 21, now preserved in the Biblioteca de la Real Academia de la Historia in Madrid, but produced almost contemporaneously in the Benedictine abbey of Sant Cugat del Vallès, near Barcelona. In addition to their antiquity, these manuscripts are almost complete collections of the Homiliary of Luculentius, while many medieval compilations which include Luculentius’ homilies gather them alongside homilies of other authors such as Gregory the Great, Smaragdus of Saint-Mihiel, Haymo of Auxerre, etc. Unfortunately most exemplars containing the text of Luculentius are fragmentary and damaged: folios or bifolios which were pulled out of an original codex and reused as guards for other manuscripts. That is why the critical edition of this homiliary entails a philological challenge for the preparation of a stemma codicum and establishing the relations between the witnesses. However, in the manuscripts (complete or fragmentary) we can distinguish two main families or traditions in which the text of Luculentius has been transmitted. The most significant difference between them is how they develop Biblical quotations: the oldest textual tradition (the one present in the previously mentioned ms. 17 and ms. 21) provides an abridged Biblical text while the second tradition, also known as the “Catalan tradition”, develops these quotations further. The latter is the most abundant and the most popular, which is why we find so many later versions of the text of Luculentius (such as sections in Breviaries or collections of a reworked Luculentius) that rely on this tradition.

By taking all these new witnesses into account, we can better assess the place and time in which the Homiliary of Luculentius was produced. First of all, it is noteworthy that a great number of witnesses did not only circulate across Catalonia, but were also copied there, with most of these being the oldest witnesses. Moreover, we now have the complete series of the homilies of Luculentius (156) and can thus see how its text and structure are related to other Carolingian homiliaries, such as that of Haymo of Auxerre, but particularly the one belonging to Smaragdus of Saint-Mihiel, a Carolingian author who also had a Visigothic background and whose writings were popular across these peripheral regions. The use of typical Carolingian sources in the Homiliary of Luculentius forces us to correct the first assessment of Luculentius as an author of the seventh century; rather, Luculentius must have been active around the tenth century.

Furthermore, the content of some of the homilies shows that, in contrast to his predecessors Smaragdus and Haymo, Luculentius was familiar, and concerned, with aspects related to the border region of Catalonia and Septimania. Let us take a look at an example of a Biblical passage quoted in a similar manner within the homilies of Luculentius, Haymo of Auxerre and Smaragdus. Here Luculentius provides a new interpretation, one which would be more familiar and suitable for a Septimanian or Catalan audience:

This extract interprets the Biblical passage concerning Jesus’ fasting in the desert, which is related to similar passages about Moses' and Helias' fasting in the preceding work of the Carolingian Smaragdus and Haymo of Auxerre. Smaragdus and Haymo followed the arguments of Bede who interpreted the presence of noctibus as the adversity that terrifies the Christians who serve God. Conversely, Luculentius says that the apostle included the “nights” because of the heretics who were said not to eat at day, but at night, according to the Muslim tradition. Additionally, Luculentius claims that Muslims do not drink wine in public, while secretly they drink nonstop. This case, among others, hints at the author’s background as well as the audience to which this text was intended to be addressed: the Homiliary of Luculentius was actually a Carolingian work produced in and for the peripheral regions of Catalonia and Septimania instead of being a product of a seventh-century Italian environment.