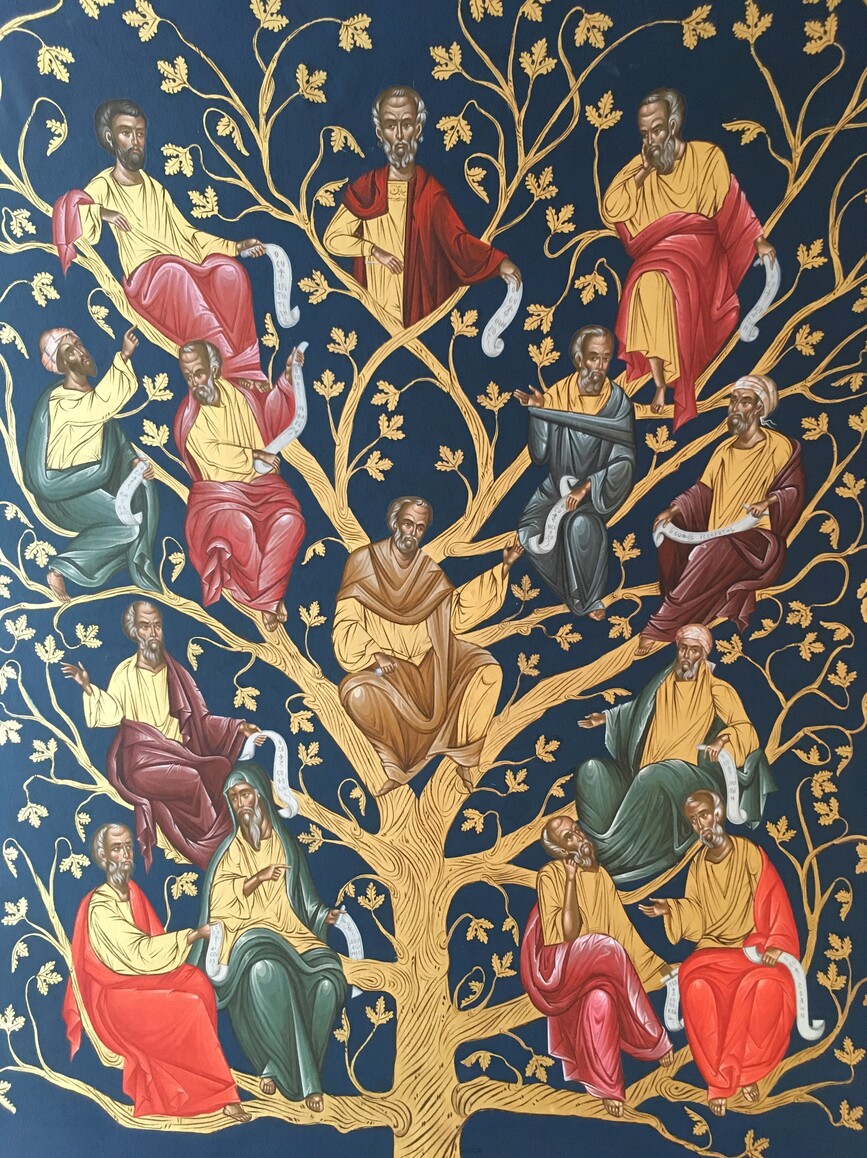 Over the past decade (especially during this current pandemic crisis) many have questioned the value of philosophy in Western society which has placed emphasis on economically viable and utilitarian trades and ways of life. Raising questions about the nature of reality and human actions may be well and fine for an individual, but what does that contribute to the core values of the society we live in? Despite the values our society implicitly or explicitly maintains, is there any good in supporting philosophy as a trade that seems to contribute little, if any, explicit good to our beliefs?

Unfortunately this blog post does not directly address this important contemporary issue that requires much contemplation, yet the general question of philosophy’s relation to a distinct viewpoint held in society, especially like religion, is a significant one that echoes across different periods of history. Although in a markedly different context from ours, late Byzantines of the 12th to 14th centuries asked a similar question: what use is philosophy in the context of a society of Christians who maintain that knowledge of the Trinitarian God by faith is sufficient by itself? Philosophy purports to tell us the nature of ultimate reality and our placement within it. Yet for Byzantines like Nicholas of Methone, Theodore Metochites, and Gregory Palamas, “philosophy” contributes little, if any, if it is solely to do with the natural realm apart from revelation—and especially if it comes from the pagans. On the one hand, one might see that this is a false dichotomy: philosophy, if anything, can help to support the claims of Christianity, especially if one has in mind the famous image of philosophy as the “handmaiden of theology” from the Latin medieval context. Yet as our Byzantines would maintain, philosophy in the capacity of a servant without its guide or direction is unable to ascertain for itself the truths revealed in theology without the presence of divine revelation.

Nicholas of Methone (d. ~1160/66 A.D.), a late Byzantine bishop known particularly for his polemical commentary on the pagan Neoplatonist, Proclus (~412–485 A.D.), is one case in point. In the preface to his commentary, Nicholas points out certain contemporaries of his who have “partaken of outside learning” from the Greeks despite the fact that they “enjoyed [divine] grace and tasted the divine mysteries” (τῆς χάριτος ἀπολαύσαντες καὶ μυστηρίων θείων γευσάμενοι): in his estimation, they replace what is “clear” and simple in Christian revelation (in his words, from “unlearned men and fishermen as teachers”) with what is unclear, “complex” or “unstable” (ποικίλον), and ultimately an elaborate lie which appears as refined and sophisticated (Refutation 1,8–2,12). For Nicholas, this is the general problem of Greek philosophy, especially personified in Proclus, in addition to the fact that the philosophers all participated in the false worship of demons as gods. One key in Nicholas’ critique is that such wisdom is false since it has been prioritized over revealed divine truth: as it turns out, it is not that otherwise-false wisdom has nothing to do with Christian revelation, but rather that such wisdom leads to falsehoods by its own nature without the stable guide of revelation. For Nicholas, true wisdom could only be seen in a figure like that personified in the early 6th-century writings (like the De Divinis Nominibus) ascribed to “St. Dionysius the Areopagite” (now known as the Pseudo-Dionysius)—what for Nicholas constitutes true “philosophy”, in contrast to Proclus.

Over 100 years after Nicholas, Theodore Metochites (1270–1320 A.D.), a Byzantine polymath and advisor of Emperor Andronikos II Palaiologos, adopted this same argument, while in his case he explicitly cites late antique Skeptics in defending this approach to the skepticism of human reason (and hence philosophy) outside faith. The specific context of this stance is found in Theodore’s 61st treatise from his Semeioseis gnomikai—tellingly titled: “That the Skeptics’ opposition to the claim that anything can be understood is not totally without reason, and that Plato and Socrates laid the foundation for the Skeptics’ opinions”. For Theodore, it is rather any knowledge of the world—not merely the ‘false wisdom’ of the pagan Greeks—which is prone to uncertainty and unclarity and leads philosophers to contradict themselves. Theodore effectively adopts a Platonist form of skepticism concerning the material world of becoming, which is in constant change: certain knowledge cannot be derived from this world, but can only come from sources transcending the world of becoming—i.e. God and principles relating to God. Theodore’s notion of certain knowledge here is strict: not even discursive reasoning in theological matters and conclusions on dogma is enough—since it is also prone to dispute and disagreement—but must only be from revelatory sources and inspiration. In one sense Theodore ultimately agrees with Nicholas, however Theodore seems to go further than Nicholas in restricting what belongs to the clarity of revelation from God: even discursive reason can be on shaky ground apart from revelation, and hence only the latter can take pride of place.

The more well-known late Byzantine theologian and saint, Gregory Palamas (1296–1357/1359 A.D.), generally continued in the same train of thought, as far as restricting the role of philosophy and prioritizing the role of revelation. However, unlike the more negative presentation of “outside learning”, Palamas is unique in giving a qualifiedly more positive appropriation: philosophy belongs to what is created by God, and can indeed be good, inasmuch as it belongs to the order of nature—however it can be used in a correct, true way or in an incorrect, false way (Triads I.1.21–22). In this regard, Palamas uses the metaphor of doctors who use the flesh of serpents to treat their patients: although potent and poisonous while alive, they contain “no better and more useful medicine” among other means (Triads I.1.20). Thus the serpent must be killed, with its head and tail cut off—both, for Palamas, symbolizing wrong opinions on divine matters and “fabulous myths” about created beings—before its flesh in the middle can be of use for medicinal purposes. Using this striking image, Palamas claims that philosophy is of use only within the bounds of one who exercises it in the right way and aims at the truth. Yet finally, for Palamas, this necessitates a higher principle: as he delineates within the treatise, philosophy pertains to nature (φυσικὸν), which is created by God and thus good in its origin and faculty, but in its activity requires exercise and aiming at the truth; by contrast, divine revelation belongs to what is “spiritual” (πνευματικόν) and is, in itself, a “gift of God” (δῶρον Θεοῦ): this implies clarity and certainty, without necessitating exercise, in the way that philosophy and what pertains to nature do. Perhaps unlike Theodore’s more pessimistic judgment about inevitable contradictions and doubt in philosophy, Palamas issues a slightly more positive role for philosophy: it can be, and is, a way to the truth—yet it must be supplemented by the certainty of revelation as a “gift of God”.

One general takeaway from our three Byzantines is that they maintained a form of fideism, although in a very qualified sense. They did not reject philosophy out of hand (thus certainly not strict fideists), but they wrestled with contextualizing its subordination to the truths of divine revelation and the faith: this especially comes out in Metochites who even thinks theology—inasmuch as it uses discursive reason—is also prone to the same problems of philosophy. Yet as we just saw in Palamas, there is the general recognition that philosophy, even if pagan in origin, still belongs as an important tool—even if paradoxically it is incomplete by itself. In this respect, all our figures hearken back to the very foundations of (pagan) philosophy-itself: Plato. Plato (e.g. in the Phaedo) also maintained that the Presocratics, as materialist philosophers, could not account for reality by themselves, though they could account for instrumental factors (e.g. Socrates’ bones in their crouched position when Socrates was seated): instead a higher principle than just material was needed to account for reality (e.g. why Socrates was seated). True philosophy then needed to account for the reasons behind reality, not just material parts and tools. The irony is our Byzantines turn the tables on Plato’s account: even this conception is but an instrument and tool for the even-higher principle of divine, Christian revelation.

•    Börje Bydén. 2002. “‘To Every Argument there is a Counter-Argument’: Theodore Metochites’ Defence of Scepticism (Semeiosis 61)”. In Byzantine philosophy and its ancient sources, edited by Katerina Ierodiakonou, 183–217. Oxford: Oxford University Press.

•    Joshua M. Robinson. 2017. “Dionysius Against Proclus: the Apophatic Critique in Nicholas of Methone’s Refutation of the Elements of Theology”. In Proclus and His Legacy, edited by David Butorac and Danielle Layne, 249–270. Berlin: De Gruyter.

•    Podcast: A History of Philosophy without any Gaps (Peter Adamson):
o    Episode 319: Georgia on My Mind: Petritsi and the Proclus Revival
o    Episode 322: Do the Math: Science in the Palaiologan Renaissance
o    Episode 323: Through His Works You Shall Know Him: Palamas and Hesychasm