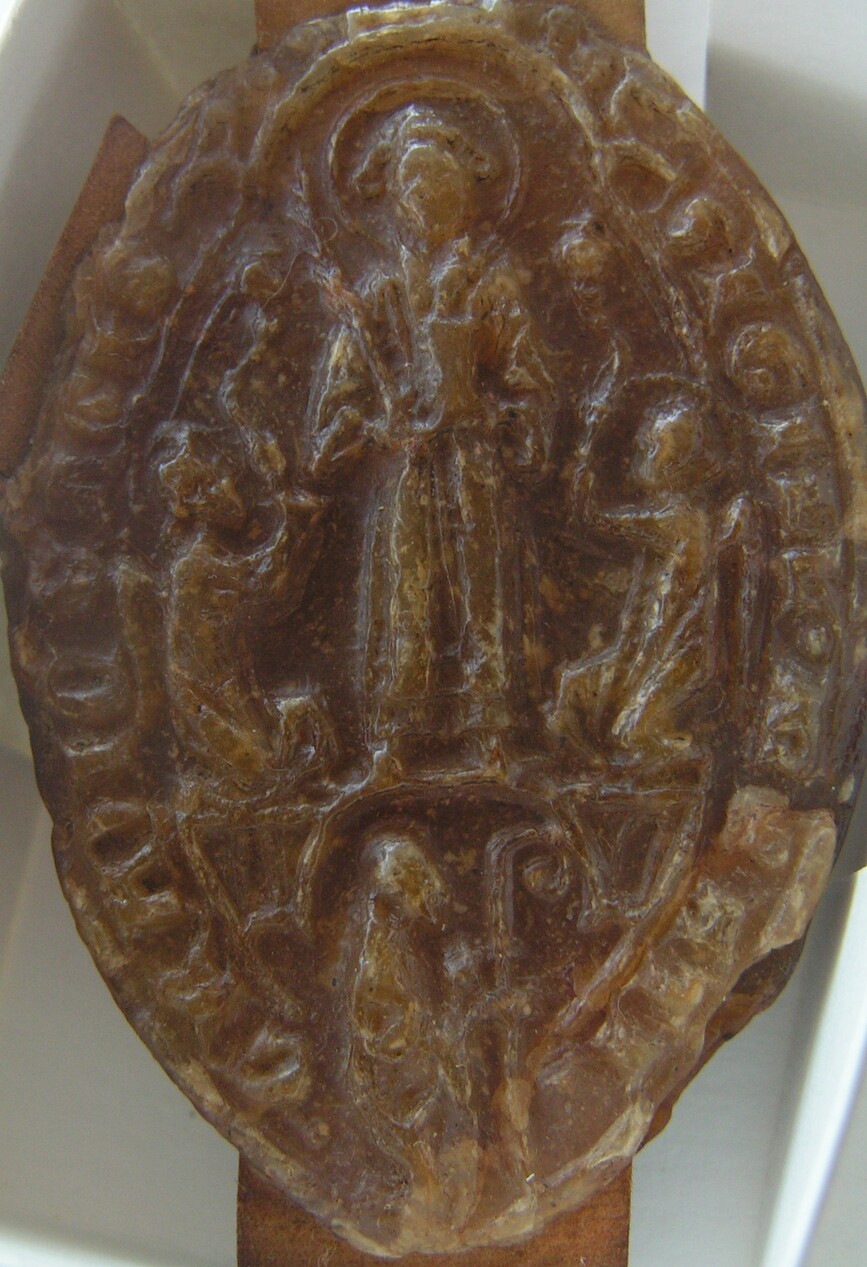 Seals of church dignitaries and institutions are among the most iconographically interesting seals in the medieval period. In addition to their practical functions of identifying the owner of the seal and his consent to the document and its contents, they can also be perceived symbolically as a public profession of faith, as a means of fixing historical memory and, last but not least, as an expression of one's role and position within the Church. Such seals include those of the pope, councils, cardinals, archbishops, bishops, priests, chapters, chapter superiors, canons, monasteries, superiors and individual members of monasteries. They depict both their owners and various saints or entire hagiographic scenes. In the High and Late Middle Ages, their seal images were complex, multi-layered, vertically oriented compositions allowing the expression of hierarchy and interdependence, where saints and the owner(s) of the seal were depicted together, along with the use of architectural backgrounds and heraldic elements. In the Middle Ages, one of the specific features of church seals was their pointed oval shape.

The seals of the top representatives of the Church (with the exception of the Pope, whose seals deviated from the usual schemes) offered an analogy to the seals of secular rulers. Cardinals, archbishops and bishops usually had their portraits portrayed with badges of their dignity and power, just as rulers were portrayed either in majesty or as warrior knights. The superiors of the monasteries, abbots, provosts, priors and others, belonged to the middle and upper classes of the Church organization. They designed their seals to follow the model of (arch)bishops, but they also worked with motifs which were popular within the orders to which they belonged, and they did not forget the patron of their own institutions. (Fig. 1) Chapters and monasteries emphasised their relationship to their patrons, mentioning the founder or important historical events, where appropriate. Priests, on the other hand, took pride in capturing moments that represented the essence of their ministry. They were portrayed on their seals in the Eucharist or during confession. In general, the approach taken to the seals of church dignitaries and institutions are very conservative: the emphasis is on proven traditions and there is a wariness against change.

The use of seals did not remain limited to the medieval period, with seals continuing to be used into the early modern period and, to a limited extent, they are still used in the modern day. Although the seal gradually lost its exclusivity as a means of identification and corroboration, and these functions were increasingly taken over by the (handwritten) signature, it continued to function as an equal means of identification alongside the signature throughout the 16th and early 17th centuries. Thereafter, the seal was added to continue tradition. In addition, the seal retained a certain prestige as a means of (self-)presentation. Analogous with this development, the form of the seals also changed. Seals became smaller, the seal image became unified, dominated by purely heraldic motifs, and it was gradually flattened. Older motifs, if kept, were transferred to the shield and were stylized according to heraldic rules. (Fig. 2, 3) Many institutions, which had the advantage of maintaining continuity of development across the centuries, continued to use their medieval seal matrix well into the modern period.

Heraldic motifs represented a welcome opportunity for self-presentation, especially for the higher ecclesiastical dignitaries. In the Bohemian environment, the first purely heraldic seals appeared at the beginning of the 15th century. At that time, they were used mainly by bishops of noble birth, but only on their less important seals (small seals or secreta). It was not until the second half of the 15th century that these purely heraldic motifs penetrated the main, official great seals. Unlike the universal hagiographic motifs that were shared throughout the Christian world, heraldic compositions were unique to the individual and revealed the noble origins of the owner.

As far as seals and their forms were concerned, those of the monasteries were among the more conservative in the ecclesiastical environment. In the monasteries, the seal tradition was maintained, for the most part, in the way that it had been established by their predecessors. Changes were only introduced slowly, usually under the pressure of the situation. In the first half of the 15th century it was the Hussite wars that brought many religious houses into existential difficulties or even led to their doom. In many cases, the seals used by the 'post-Hussite' monastic superiors did not reach the artistic level of the seals of previous times. (Fig. 4) In the second half of the 15th century, the situation of Bohemian and Moravian monasteries began to stabilize, which was also reflected in the change of the seal matrices of their superiors. Again, they not only began to emphasize the motif itself, but gave greater attention to its artistic quality. At the beginning of the 16th century, while preserving the seal image and its composition, the form was transformed from Gothic to Renaissance, with this change also affected the seal texts, with Gothic script being replaced by a humanistic one. (Fig. 5) Church dignitaries began to abandon the traditional pointed oval shape; round seals gradually prevailed.

The situation once again gained momentum in the second half of the 16th century. At that time, the Emperors Maximilian and Rudolf intervened in the self-government of a number of monasteries, where they installed new superiors of their choice. Some of the new appointees had not been men of the Church prior to that, but were instead recruited from the ranks of the nobility. These new superiors of the various religious houses brought a fresh wind to the sphragistics of the monasteries, and it was they who first introduced the great armorial seal into such a conservative environment. Here they were able to combine their family signs with established motifs. They thus set the pattern for the stylization of the seals of their successors. (Fig. 6)

It is interesting to observe the changes in the iconography of the seals of the monasteries’ superiors in this period and over the following few decades. They reflect the history of the monastery and the ambitions of the respective dignitaries. Inspired by their predecessors or contemporaries from other religious houses, low-born men sought to achieve ennoblement after their election or installation as monastery superior. If the process was successful, they immediately reflected the new reality in a newly acquired seal. Such a seal then influenced the sealing practices of other abbots for many decades to come.

Although the subject of early modern seals of monasteries and their superiors is fascinating, research in this field is still in its infancy. The main aim of my stay in Austria is to undertake research in local archives and to seek out further source documents. The material that I obtain in this research will allow me to conduct detailed comparisons and will offer a deeper understanding of the strategies of self-presentation of these early modern church dignitaries, in turn providing insight into their interrelationships, which manifested themselves, among other things, in the adoption and imitation of seal motifs.

Martina Bolom-Kotari is head of the Department of Auxiliary Historical Sciences and Archive Studies at the University of Hradec Králové (Czech Republic). Her research focuses on sigillography, ecclesiastical history and diplomatics in the Late Middle Ages and Early Modern Period. During her stay in Vienna in 2021, she worked together with the Working Group Textual Networks and Translation Cultures. She conducts research in Austrian archives and libraries to deepen her comparative studies on monastic and ecclesiastical seals.