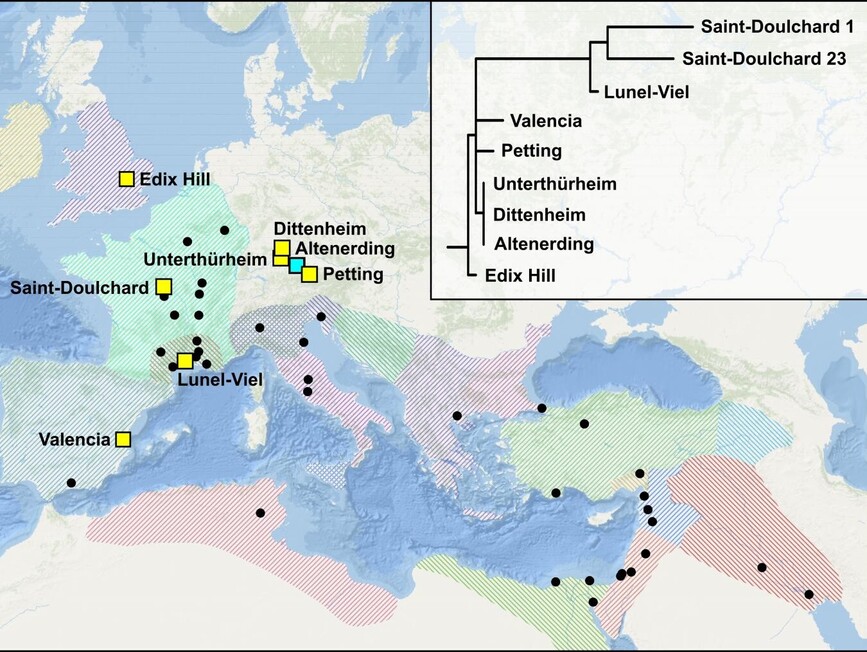 ‘So it was that in this disease there was no cause which came within the province of human reasoning; for in all cases the issue tended to be something unaccountable.’ (Procopius, Wars 2.22.33)

Did pandemic and climate change have an impact on the fall of the Roman Empire? Debates about this question in recent years have now unexpectedly become very relevant in the contemporary context. They raise important issues about what we can learn from an environmental history of Antiquity and the Middle Ages, but also about how to incorporate scientific data into historical narratives. On a fundamental level, it is crucial to understand that the history of mankind cannot be separated from its natural environment, as traditional historical narratives may imply. In particular, changes in human ways of life may have unforeseen consequences. Increasing large-distance connectivity can lead to a microbial unification of the world, and facilitate the spread of diseases. The more we know about such processes, the better can we anticipate them. However, we should not rely on simple deterministic models. So far, studies of historical climate change and diseases have often suggested that they directly determined social changes: migrations, wars, the fall of states and cultures. Gradually, we are approaching a more nuanced understanding of the social effects of catastrophic events. This is where history has an important contribution to make.

How, then, did the two most serious outbreaks of the plague in medieval history affect the society of their day? These two pandemics were the ‘Justinianic Plague’, which reached Europe in 541, and the ‘Black Death’ that struck in 1348, both with recurrent outbreaks for an extended period. The well-documented late medieval plague will be the topic of next week’s blog by Pavlína Rychterová. The sources for the Justinianic Plague are patchier. The two most outspoken written testimonies are both from Constantinople, by Procopius and by John of Ephesos. Procopius (Wars, 2.22-23) provides very plausible observations on the spread of the plague from Pelusium in Egypt, soon affecting other countries, moving from the seaside inwards even to remote regions, but initially sparing some areas; later it would return to these areas while sparing those that had already been hit (2.22.6-10). In the second year (542), it came to Constantinople, where it raged for four months, with a death toll of up to 10,000 per day at the climax of the plague (2.23.2). John of Ephesos, whose description is transmitted in a 8th-century Syriac Chronicle (Ps.-Dionysius of Tell Mahre pt. 3, trans. Witakowski, pp. 74-98), says that the officials entrusted with counting the dead in Constantinople stopped at 230,000, so there were 300,000 or more. Such numbers in ancient texts are often exaggerated (John’s account has a strong prophetic and apocalyptic colouring); but this one would roughly concord with Procopius’s number, and constitute a good half of the estimated population of the city. For regions beyond the Eastern Empire, Procopius only briefly says that the plague ‘also fell upon the land of the Persians and visited all the other barbarians besides’ (2.23.21). Yet remarkably, in his detailed account of the Gothic War in Italy resumed in these very years, he does not mention the plague. These were the years when after the Roman victory of 540, Totila recuperated much of the peninsula, a swift progress that may be due to the effects of the plague in the East; yet Justinian continued to send, if insufficient, forces from Constantinople to Italy.

Opinions about the actual effects of the plague among scholars have always been divided (a good overview is Lester K. Little’s ‘Plague and the End of Antiquity’, 2007). Now, we owe significant progress to archaeogeneticists, who have identified the pathogen responsible for the pandemic: Yersinia pestis, which also caused the plague of 1348. It was detected in several Bavarian graves from the period at Aschheim and Altenerding, but also in Gaul, Spain and England. Currently, we have some thirty positive samples from the period. Geneticists argue there must have been more, for analysis of 14th-century mass burials has shown that fragments of Yersinia pestis DNA can only be detected in about 20% of these plague victims. These samples have also allowed tracing variants of Yersinia pestis, and thus ways of diffusion.

Some historians regard the evidence we have so far as proof for the catastrophic disruption caused by the Justinianic Plague, and see it as a key factor for the collapse of the Roman Empire. Kyle Harper, in his well-written and forcefully argued 2017 book ‘The Fate of Rome’, estimates that about half of the population may have died, not only in Constantinople but across the Empire and beyond: ‘Germs are far deadlier than Germans’ (p. 18). He suggests that, together with the onset of a ‘Little Ice Age’, this decisively weakened the resistance of the powerful Eastern Roman Empire so that it soon lost much of its territory. What weakens this argument is the fact that the decisive event in the decline of Byzantine power were the Islamic conquests, which started almost a century after the first outbreak of the plague. There was, furthermore, no plague to account for the ‘fall of Rome’ in the West, where imperial rule ended with Odoacer’s coup in 476. The book has led to a controversial discussion in ‘History Compass’ 2018, in which an interdisciplinary group of scholars around John Haldon criticised Harper’s rather wholesale conclusions, to which he responded. Important methodological issues about the historical interpretation of scientific data were addressed in this debate.

In any case, we owe to Kyle Harper to have raised public awareness for environmental factors in the history of the distant past. Yet more research is needed, not least, to calibrate and differentiate the scattered genetic evidence available so far. The Synergy Grant project HistoGenes, which we presented in our blog on May 1, will contribute to this goal by analysing hundreds of sixth- and seventh-century samples for pathogens, a task that will be carried out by Johannes Krause and his team in Jena and Leipzig. Our interdisciplinary team in Vienna will assess the data from an archaeological and historical perspective. Were the thinly-populated regions of Eastern Central Europe hit as hard as the city of Constantinople? Was the risk to die of the plague higher for mobile individuals (e.g. mounted warriors, migrants) than for the sedentary rural population, and higher for the poor with a reduced diet than for those who were well-fed and buried with rich grave-goods? We will learn more about life along the Middle Danube in the Early Middle Ages, and will hopefully be able to provide further evidence to assess the impact of a pandemic that happened almost 1500 years ago.

Kyle Harper, The Fates of Rome: Climate, Disease, and the End of an Empire, Princeton: Princeton University Press, 2017.