Researchers at IMBA - Institute for Molecular Biotechnology of the Austrian Academy of Sciences – describe “adaptive radiation” of RNA export proteins. Their findings show how a small RNA pathway utilizes and re-purposes preexisting building blocks in the cell to protect genome integrity. 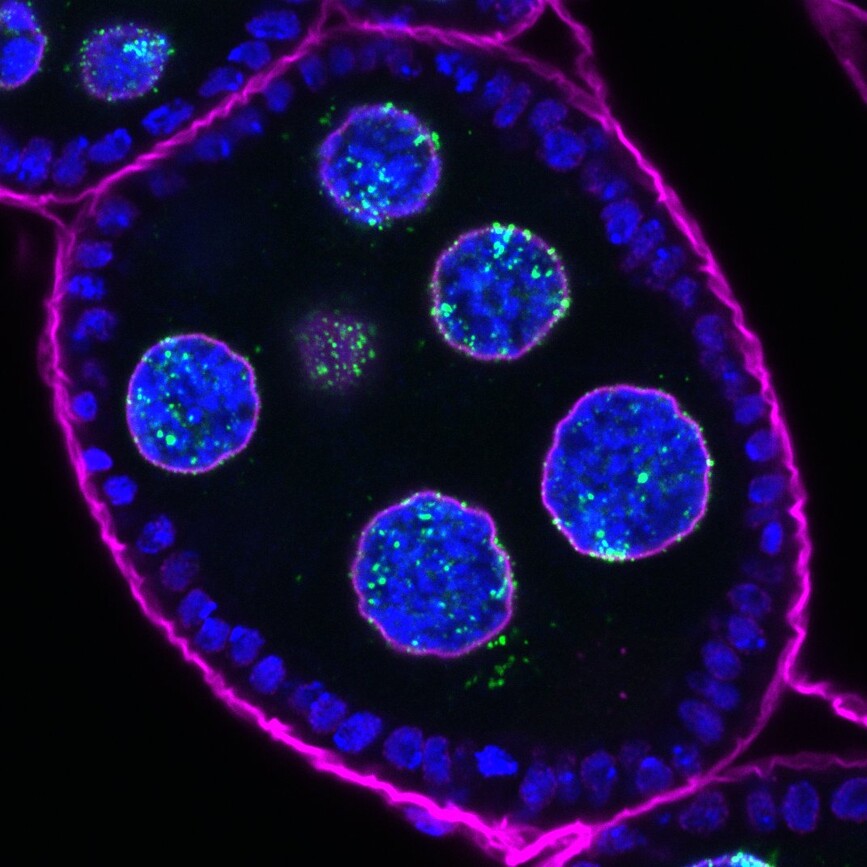 An egg chamber of a Drosophila melanogaster ovary expressing Nxf3 tagged with GFP (in green). Nxf3 localizes to piRNA source loci the nucleus as well as piRNA processing sites in the cytoplasm. DNA is stained in blue, while the nuclear pore marker (WGA) is in magenta. (c)IMBA

Of the three billion base pairs in the human genome, less than two percent contain the information encoding the ~20,000 proteins. That is, because at least half of our genetic material originated from selfish genetic elements such as transposons. Scattered throughout the genomes of plants, fungi and animals, transposons can ‘jump’ from one genomic position to another. In doing so, they provide an important source of genetic diversity and thereby can promote adaptation of their host. Uncontrolled transposon activity on the other hand leads to widespread DNA damage and mutations, which can result in disease or cell death. To prevent this, organisms have developed effective ways to keep the harmful genome intruders in check.

The lab of Julius Brennecke at IMBA studies a small RNA-based genome immune system, which suppresses transposon activity in animals. At its core are piRNAs, tiny snippets of genetic information that guide a silencing machinery to find transposons and prevent their jumping. piRNAs are processed from longer RNAs, which must leave the cell nucleus in order to travel to the piRNA production sites in the surrounding cytoplasm. But there is a problem: the nucleus has a quality control system to prevent RNAs that lack molecular maturation signatures from traveling out to the cytoplasm – and piRNA precursors lack all of these molecular signatures.  It has therefore remained a mystery how piRNA precursors make it past the cellular security checks and leave the nucleus to provide the cell with the essential piRNAs for genome defense.

Peter Refsing Andersen, a former Postdoc at IMBA and now group leader at Aarhus University in Denmark, recently discovered that cells bend the conventional rules of transcription when they make piRNA precursors. piRNA loci, which resemble transposon graveyards in the genome, are embedded in heterochromatin, a form of chromatin that typically prevents transcription. However, cells overturn the repressive character of heterochromatin at piRNA loci, allowing them to be transcribed. Now, Peter and Mostafa ElMaghraby – a Vienna BioCenter PhD Student – show that the emerging piRNA precursors also utilize heterochromatin to enable the journey from the nucleus to their cytoplasmic destination. A protein called Nxf3, a sister protein of the textbook RNA exporter Nxf1, plays a central role in this process. Nxf3, together with its companion called Bootlegger, smuggles the piRNA precursor from the heterochromatic production sites into the cytoplasm, where it then delivers the RNA cargo to the piRNA production machinery. “The Nxf3 pathway bypasses cellular quality control checkpoints and reveals a novel concept of epigenetically-encoded “itineraries” for sorting genetic information in cells. It is fascinating to see how cells use existing building blocks to construct new pathways, which cope with evolutionary challenges. Just like furniture can be repurposed with IKEA-hacks," said Peter Refsing Andersen, co-first author of the new publication.

Meanwhile, the Brennecke group revealed that Nxf2, another Nxf1 sister protein, is also an essential component of the cellular transposon defense system. Surprisingly, Nfx2 has lost its RNA ‘travel guide’ function and instead plays a central role in heterochromatin formation at transposon loci. Such heterochromatin formation safe-guards the genome by preventing the transposons from jumping. "It is the first demonstration of an RNA export protein performing an entirely different task compared to its original function," explains Julia Batki, who together with Jakob Schnabl investigated Nxf2 function during her studies in the Vienna BioCenter PhD Program.

During evolution, existing structures are frequently duplicated and then converted into something new that could be useful. “Our findings present a remarkable example of ‘adaptive radiation’ at the protein level. Two copies of the ancestral RNA exporter were repurposed during evolution to fulfil entirely new functions in the cell. Especially when facing an arms race like the one against the fast-evolving genome parasites, it could be very beneficial to quickly innovate new molecular routes that help outrun the genetic competitors,” says IMBA group leader Julius Brennecke.