Proper folding of extremely long chromosomal DNA molecules is crucial for the correct functioning of the cell. Scientists from the Gerlich lab at IMBA – Institute of Molecular Biotechnology of the Austrian Academy of Sciences – developed a groundbreaking method to map contact points between replicated DNA molecules, thereby elucidating how the genome is folded inside the nucleus of human cells. 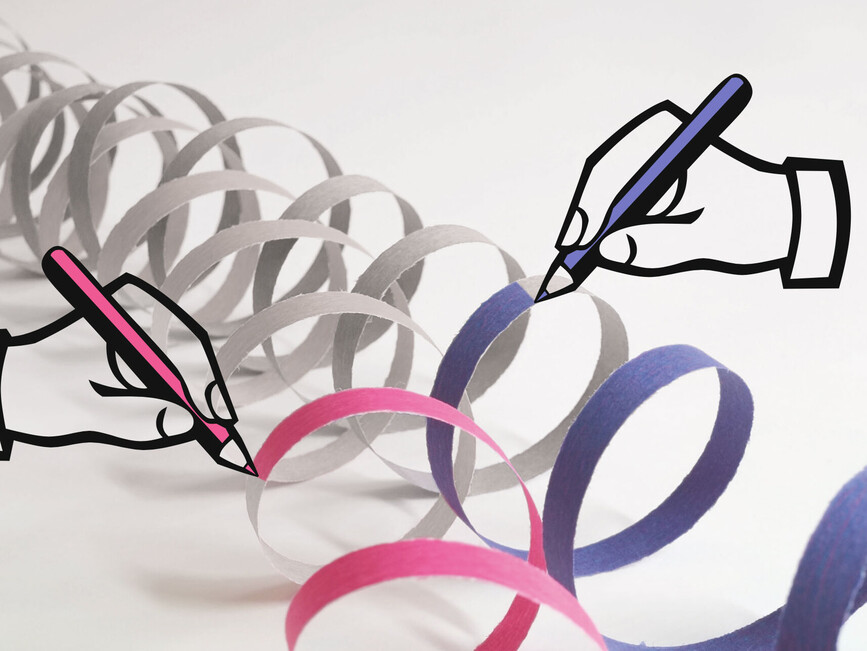 The cells that make up our body are tiny, each of them measuring only micrometers in diameter. The ensemble of chromosomal DNA molecules that encode the genome, on the other hand, measures almost 2 meters. In order to fit into cells, chromosomal DNA is folded many times. But the DNA is not merely squeezed into the nucleus in a random manner but folded in a specific and highly regulated structure. The spatial organization of chromosomal DNA enables regulated topological interactions between distant parts, thereby supporting proper expression, maintenance, and transport of the genome across cell generations.

Breaks in our DNA, which can occur spontaneously or result from irradiation or chemical insults, can lead to severe problems since they foster mutations and can ultimately lead to cancer. But not every DNA break has disastrous consequences, since our cells have ingenious ways of repairing the damage. One of the main DNA repair pathways involves copying the missing information on the damaged DNA from the replicated sister chromatid. For this to occur, the two DNA molecules of sister chromatids need to come close together at the exact same genomic position. How the two DNA molecules are organized relative to each other to support this important repair pathway, however, has remained unclear.

The team around Daniel Gerlich developed a method that solves this problem. "Current methods to map the folding of DNA have a serious blind spot: They are not able to distinguish identical copies of DNA molecules. Our approach to solve this was to label DNA copies in a way such that we can discriminate them by DNA sequencing" explains Michael Mitter, doctoral student in Dr. Gerlich’s lab and first author of the current publication in Nature. Using this approach, the researchers were able to create the first high resolution map of contact points between replicated chromosomes.

“With this new method, we can now study the molecular machinery regulating the conformation of sister chromatids, which will provide insights into the mechanics underlying the repair of DNA breaks and the formation of rod-shaped chromosomes in dividing cells, which is required for proper transport the genome to cell progeny,” says Daniel Gerlich about the project, which is financed by the Vienna Science and Technology Fund (WWTF) and was a fruitful collaboration of several research groups at the Vienna BioCenter, including the Ameres and Goloborodko labs at IMBA, and the Peters lab at the neighboring Institute of Molecular Pathology (IMP).

About IMBA
IMBA - Institute of Molecular Biotechnology - is one of the leading biomedical research institutes in Europe focusing on cutting-edge stem cell technologies, functional genomics, and RNA biology. IMBA is located at the Vienna BioCenter, the vibrant cluster of universities, research institutes and biotech companies in Austria. IMBA is a subsidiary of the Austrian Academy of Sciences, the leading national sponsor of non-university academic research. The stem cell and organoid research at IMBA is being funded by the Austrian Federal Ministry of Science and the City of Vienna.