How the immune system adapts to pregnancy has puzzled researchers for decades. An international team of researchers, including scientists from IMBA – Institute of Molecular Biotechnology of the Austrian Academy of Sciences – has now discovered that important changes in the thymus occur in order to prevent miscarriages and gestational diabetes. The results are published in the journal Nature. 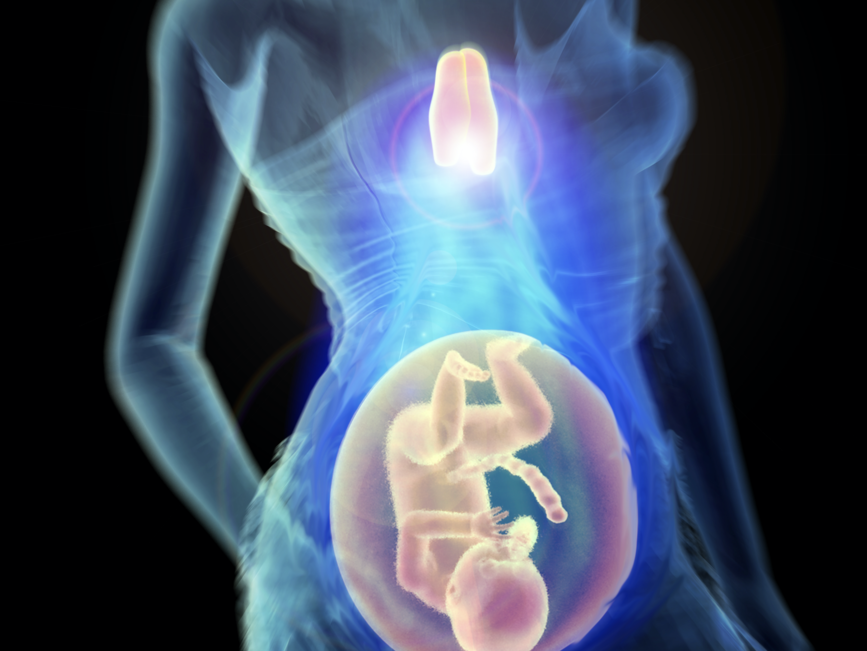 The thymus as key to healthy pregnancies. ©IMBA/Kulcsar

Female sex hormones instruct the thymus, a central organ of the immune system, to produce specialized cells called “Tregs” to deal with physiological changes to arise during pregnancy, the study revealed. The researchers also found that RANK, a receptor expressed in a part of the thymus called the epithelium, is the key molecule behind this mechanism. The study is an international research effort including scientists from IMBA, the University of British Columbia, the Karolinska Institutet and the Medical University of Vienna.

“We knew RANK was expressed in the thymus, but its role in pregnancy was unknown,” says the study’s senior author Josef Penninger, IMBA group leader and founding director, who is now director of the Life Sciences Institute of the University of British Columbia. To gain deeper insights, the authors studied mice where RANK had been deleted from the thymus.
“The absence of RANK prevented the production of Tregs in the thymus during pregnancy. That resulted in less Tregs in the placentas, leading to elevated rates of miscarriage,” says the study’s lead author Magdalena Paolino, former postdoctoral fellow at IMBA, who now heads, since 2017, her own laboratory at the renowned Karolinska Institutet in Sweden.

The findings also offer new molecular insights into the development of gestational diabetes, a disease that affects approximately 15 percent of women in pregnancy worldwide, and yet still puzzles scientists to this day. In healthy pregnancies, the researchers found that Tregs migrated to the mother’s fat tissue to prevent inflammation and help control glucose levels in the body. Pregnant mice lacking RANK had high levels of glucose and insulin in their blood and many other indicators of gestational diabetes, including larger-than-average young.
“Similar to babies of women with gestational diabetes, the newborn pups were much heavier than average,” says Paolino.
The deficiency of Tregs during pregnancy in mothers also resulted in long-lasting transgenerational effects on the offspring, which remained prone to diabetes and overweight throughout their life spans. Interestingly, administering thymus-derived Tregs isolated from normal pregnancies to the RANK-deficient mice reversed all the mice’s health issues, including miscarriage and maternal glucose levels, and also normalised the body weights of the pups.

The researchers also analysed women with gestational diabetes, revealing a reduced number of Tregs in their placentas, similar to the study on mice.
“The discovery of this new mechanism underlying gestational diabetes potentially offers new therapeutic targets for mother and fetus in the future,” says co-author Dr. Alexandra Kautzky-Willer, a clinician researcher based at the Medical University of Vienna.

“The thymus changes massively during pregnancy and how such rewiring of an entire tissue contributes to a healthy pregnancy has been one of the remaining mysteries of immunology,” adds Dr. Penninger. “Our work over many years has now not only solved this puzzle – pregnancy hormones rewire the thymus via RANK – but uncovered a new paradigm for its function: the thymus not only changes the immune system of the mother so it does not reject the fetus, but the thymus also controls metabolic health of the mother. “This research changes our view of the thymus as an active and dynamic organ required to safeguard pregnancies,” says Penninger.

The study was made possible thanks to a close collaboration between the Institute of Molecular Biotechnology of the Austrian Academy of Sciences in Vienna, the Life Sciences Institute in Vancouver, and the Karolinska Institutet. Researchers from the CeMM Institute and the Medical University in Vienna, as well as from the University of Birmingham and Oxford in the United Kingdom also participated.

About IMBA
IMBA - Institute of Molecular Biotechnology - is one of the leading biomedical research institutes in Europe focusing on cutting-edge stem cell technologies, functional genomics, and RNA biology. IMBA is located at the Vienna BioCenter, the vibrant cluster of universities, research institutes and biotech companies in Austria. IMBA is a subsidiary of the Austrian Academy of Sciences, the leading national sponsor of non-university academic research. The stem cell and organoid research at IMBA is being funded by the Austrian Federal Ministry of Science and the City of Vienna.