How are proteins in the cells of a flowering plant similar to social networks on Twitter or Facebook? And how might both of those be related to the way pathogens make plants or people sick? 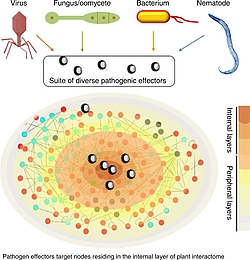 Shahid Mukhtar, Ph.D., and colleagues at the University of Alabama at Birmingham address these questions in a collaborative study with Youssef Belkhadir at the Gregor Mendel Institute of the Austrian Academy of Sciences. Using systems biology, they successfully identified previously unknown protein targets of plant pathogens in the flowering plant Arabidopsis thaliana by employing some of the same methods used to analyze social networks. Their theoretical framework, they say, could help analyze other interactions between species to reveal pathogen contact points.

In social networks, one can map the connections between followers or friends on Twitter and Facebook. A few people will have a huge number of connections, some will have many, and most will have far fewer. A map of these connections is akin to an airline route map, and the architecture of the networks shows topological features like hubs and bottlenecks. In addition, analysis of social networks has also allowed experts to identify people who are the “best information spreaders.” Similarly, for biology, deciphering the network architecture in an ecosystem or among macromolecules within cells can help discover novel components in these complex systems and provide biological insights and testable hypotheses.

One such network exists at the surface of plant cells between receptors that plants use to sense and respond to environmental cues and dangers — especially to pathogens. When pathogens attack a plant, they inject specialized proteins, termed effectors, into the plant cell that target this network to enable infection and modulate the plant’s metabolism for the pathogen’s benefit. In a study published in Nature Communications, the team set out to determine whether network biology could discover unknown receptors targeted by effectors.

The team first looked at interactions between all proteins within the cell; here, only 6.5 percent of the large “hubs” in this network were known effector targets, making it a poor way of identifying new targets. They then applied a method called weighted k-shell decomposition to identify the best “information spreaders,” akin to recent analysis of social networks, and found that 33 percent of these proteins were known effector targets.

Based on this success, they applied the k-shell analysis to the receptor network. Of the more than 500 proteins in this network, 35 were predicted to be the information spreaders. They tested interactions between 20 of these proteins and effectors from different pathogens and found 8 interacted with different effectors for a discovery rate of 40%. Importantly, 7 of these were previously unknown to be effector targets and mutants of all 7 showed changes in pathogen growth on infected plants.

“Our network-centric approach,” the researchers wrote, “has exciting potential applicability on diverse intra- and inter-species interactomes, including human protein-protein interaction networks, in efforts to unravel host-pathogen contact points, while fostering the design of targeted therapeutic strategies.”