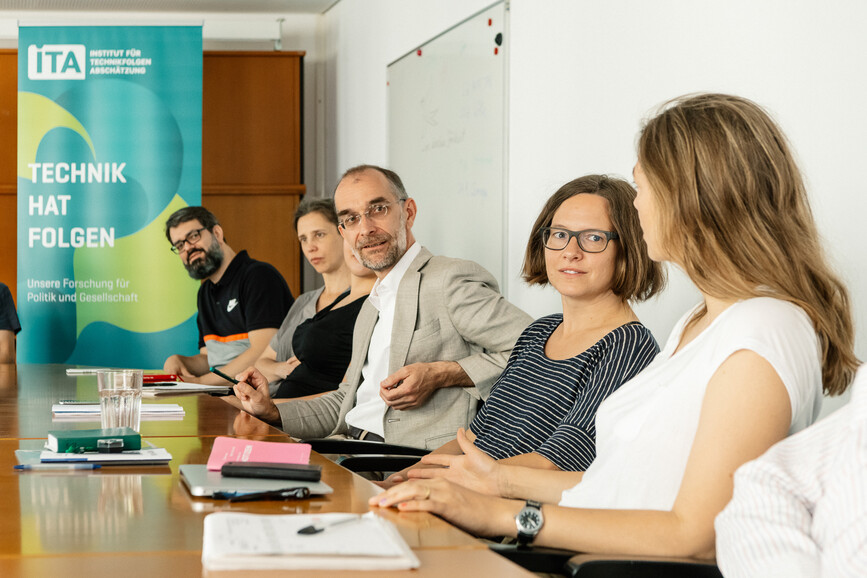 Michael Nentwich (3rd f.l.) at the weekly Jour Fixe - at the ITA, economists, biologists, sociologists and human ecologists work together in an interdisciplinary manner. (Foto: ÖAW)

Whether it is questions around neuro-enhancement, nanotechnologies or the effects of digitalisation on our private and working lives - today it is impossible to imagine Austria's political and scientific landscape without technology assessment (TA). But this was not always the case.

In their article "Three decades of institutionalised TA in Austria: The Institute of Technology Assessment of the Austrian Academy of Sciences", Daniela Fuchs, human biologist and historian, and ITA Director Michael Nentwich describe the ups and downs of TA since the 1980s: From the founding of a research group in 1984 to the advisory role for parliament that the ITA has taken on together with the AIT - Austrian Institute of Technology since 2017. It is currently advising Parliament on the consequences of a large-scale blackout and on cybersecurity issues.

"In Austria, technology assessment is closely linked to the founding and development of the ITA," Michael Nentwich emphasises. In 1987, the habilitated science and technology researcher joined the then “TA working group”, today he is the current head of the ITA, which was transformed into an institute of the Austrian Academy of Sciences in 1994. "Our goal is to research the social, economic and environmental consequences of new technologies. It is also about advising policy-makers to ensure that new technologies are applied in our society in such a way that fundamental principles such as environmental protection, health protection at the workplace and data protection are being considered", says Nentwich.

The road to recognition

In their article, Fuchs and Nentwich tell tales of past conflicts and enthusiastic beginnings of the ITA in Austria: from its founding by Ernst Braun, to the expansion of interdisciplinary competence in the 1990s, to the impending end for technology assessment in the course of a major restructuring of the Austrian Academy of Sciences. They also take an honest and thoroughly critical look at the ITA's achievements and describe the long road which finally led to a stable cooperation with the Austrian Parliament.

"How technology and society interact and influence each other, how technologies affect our lives, these questions will occupy us for a long time to come. An essential aspect of TA is that the expertise comes from a team of different disciplines. We have biologists, engineers, sociologists of technology and economists working side by side. This allows us to take a unique perspective that we believe is worth communicating to policy makers and the public."