ITA researcher Alexander Bogner pleads for an interdisciplinary pandemic council - Barbara Prainsack: Science has become the topic of the day. Virologist Florian Krammer dared to "jump into the deep end". 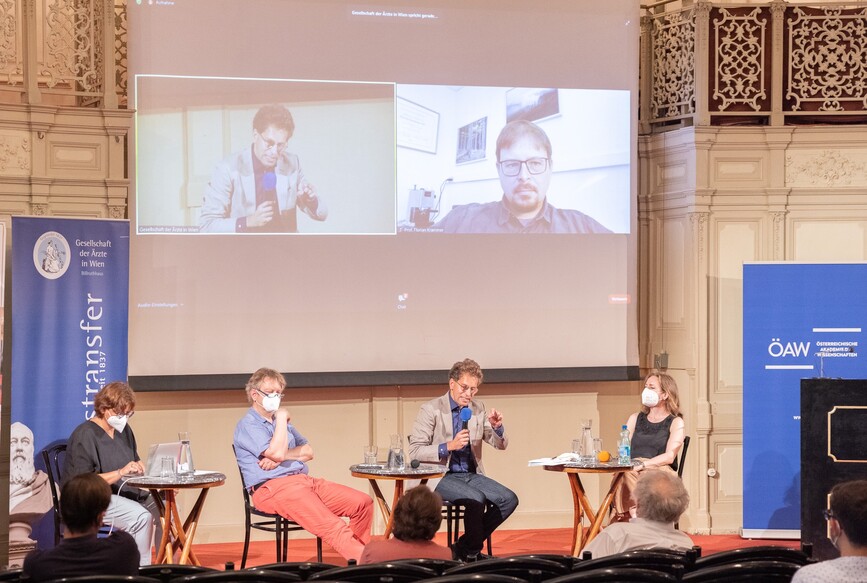 The symposium was organised under the conceptual leadership of Alexander Bogner (ITA, 3rd from left), Sylvia Knapp (Medical University of Vienna) and Hannes-Jörg Schmiedmayer (Vienna University of Technology) and held at the Billrothhaus of the Society of Physicians in Vienna and online. (Photo: Daniel Hinterramskogler)

What is the significance of expert knowledge in the event of a crisis? How can it give direction to politics, and where does politics have to act independently? These and other questions were discussed on 28 June by Alexander Bogner (Senior Scientist at the Institute of Technology Assessment - ITA of the Austrian Academy of Sciences), Viola Priesemann (Physicist at the Max Planck Institute for Dynamics and Self-Organisation), Barbara Prainsack (Political Scientist at the University of Vienna) and Florian Krammer (Virologist at the Icahn School of Medicine at Mount Sinai) at an ÖAW symposium on the topic: "What can the sciences achieve in the Corona pandemic?"

Juxtaposing the voices of politics, citizens and science

Alexander Bogner emphasised the multitude of perspectives different scientific disciplines bring to the table: "While experts from virology welcomed a next lockdown with a view to incidences, many economists warned against it. While medicine pointed to the contagiousness of even young people, educational research warned against further digital education," Bogner said. He therefore pleads for an interdisciplinary pandemic council. In addition to medicine, virology and complexity research, this council would also integrate the humanities and social sciences, e.g. technology assessment. There would not be one "scientifically correct" solution, but ultimately it would be a matter of weighing up interests and deciding on values, in which the voices of the citizens would also have to be heard.

Science became the topic of the day

For Florian Krammer, facing the public on an unprecedented scale was quite a challenge. The virologist, who is often quoted and visible in the media, was already used to communicating proactively as he emerged himself in US research practices. However, the pandemic brought a new challenge: High public exposure, little knowledge and extremely high public expectations in science.

Barbara Prainsack highlighted the differences in crisis management. While most people listened to science more than ever, there was a large mass that did not accept expert knowledge. After the pandemic, there was therefore "a new relationship between the public, science and politics. [...] Discussions about science have become discussions about world views," says Prainsack.