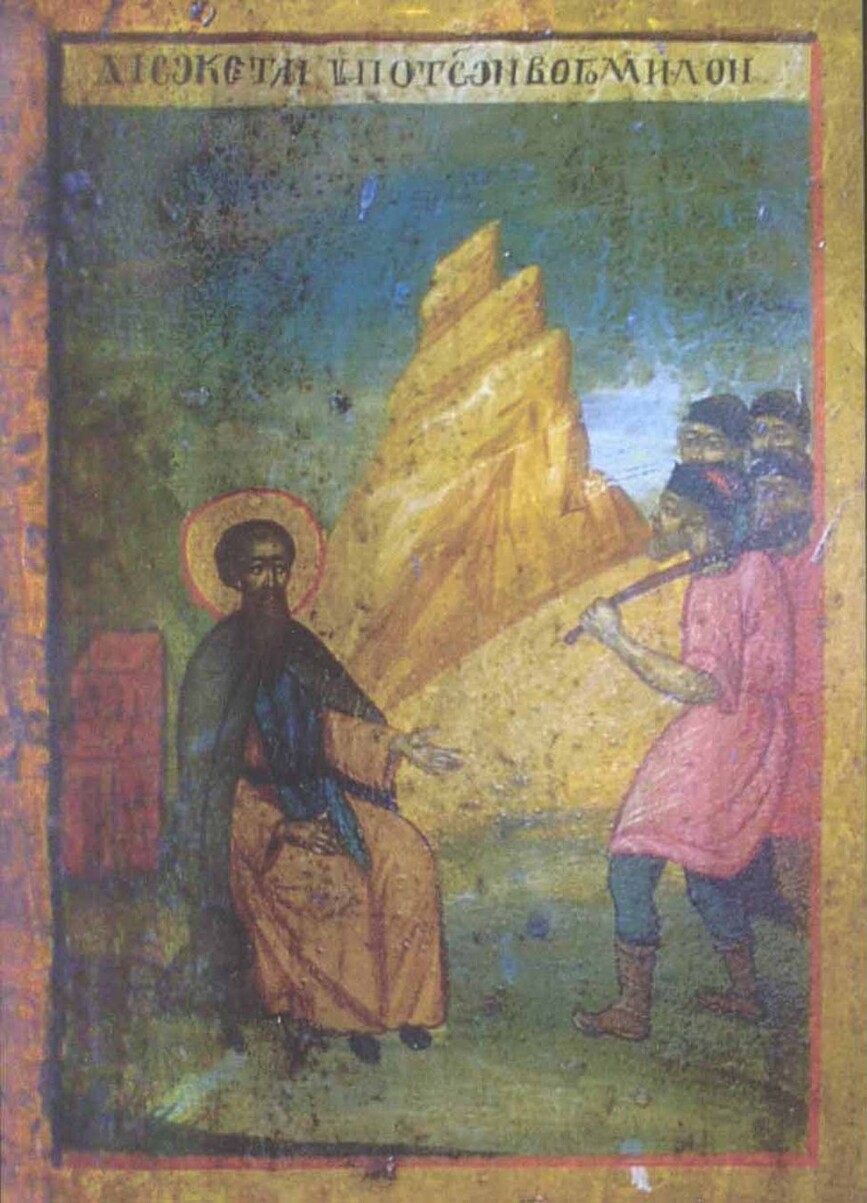 The Bogomils were medieval dualists who roamed across the Byzantine landscape from the 10th to the early 15th century, according to the sources. They were – as is the focus of my ongoing research project and forthcoming monograph – mediators and carriers of antique tradition, Christian and lay religiosity, who called themselves the “inhabitants of Heaven” and Theotokoi (“God-bearers”).

Words, carriers of meaning and message, are often endowed with nuances, which can sometimes make all the difference: textual threads, allegorical interpretation and exegetical approaches play an important role in the interlacing of scriptural and parascriptural materials, reflecting the conceptual background, announcing specific semantic fields, and unveiling recurrences to different textual methodologies. More precisely, this may point to underlying filaments, and the very modus operandi in the process of the construction of narratives in the Bogomil conceptual tissue.

My research aims to undertake a reconstruction of the less-pronounced, less-detectable, and less-explored threads knitted in the tissue of the Bogomil doctrine and is being done through positioning the Bogomils at the intersection of the apostolic tradition, Gnostic-leaning, extra-canonical, monastic (mystical) tradition, but also of the pagan substratum and of popular religiosity. Moreover, undertaking a quest for the less translucent non-canonical elements in the Bogomil exegesis significantly leads to uncovering some deeper textual and conceptual layers and strands, which found their place in the Bogomil worldview, doctrine, exegesis, and also perhaps even in the relevant social and historical settings.

The main method I employ is the identification and reconstruction of specific elements, narratives, motifs, and textual strands among the Bogomil teachings; then, the detection from where they incorporated them into their system (that is, the identification of their possible provenance), specifically opening the questions when, how and why they were transmitted and along what routes.

Judging by the information conveyed by the diversified source material, the Bogomils were apparently brought into connection with some of the popular beliefs and practices in the Byzanto-Slavic world.

The Acts of the Synod of 27th September 1325 preserve an account told by a monk, Malachia, who was deacon and cleric of the Pantocrator monastery in Thessaloniki. In it he discusses the situation of an epileptic monk, Dositheus, who had searched for a remedy for his illness. A certain Bogomil advised him to drink contaminated Epiphany water. This is just one example of scarcely-preserved accounts testifying to the direct involvement of Bogomils in what seems to be a reflection of lay religiosity embodied in healing/superstitious practices. However, other similar hints do exist, as, for example, the Bogomils were also associated with the festivity of St. John’s Eve/Midsummer’s Eve (24th June). According to Dimitri Obolensky, this celebration was later brought into connection with the Bogomil practice, and the participants were accused of performing mystery rites alike the pagan ones. Both of these festivals, Epiphany and St. John’s Eve, originated in the Christian lore, but were marked with certain influx of magical practices and beliefs, and probably imbued with pagan remnants.

Another festivity with which the Bogomils were at times connected was Rusalia. It was a pagan religious tradition, also encountered in particular among the South Slavs, and accounted for by Demetrios Chomatenos (1217–1236), archbishop of Ohrid. According to Obolensky, the practice may have initially sprung out of the Roman custom of paying honor to and commemorating the souls of the deceased. Rusalia was celebrated on the Eve of Epiphany, St. John’ Eve, and at Pentecost, and involved some healing rituals and specific ritual actions, including dance, chanting, and observation of the so-called “inverted” behavior, which may have resonated with and been particularly appealing to the Bogomils. The Bogomils – or at least some among them – may have felt attracted by these curious semi-magical practices, which were situated somewhere at the cross-roads between religion and magic, lay religiosity, paganism and superstition, as these may have born a certain level of analogy with some of their own observations.

Expressions of popular devotion and lay religiosity represented a possible means of transfer for some of the extra-canonical elements and a reservoir of the previous traditions and observances. Moreover, the Bogomils most likely incorporated apocryphal legends and folk demonology into their practices. In their biblical exegesis, the Bogomils re-deployed motifs of apocryphal provenance and those based on Jewish sources.

Euthymius Zigabenus, a monk and Biblical exegete (1050–1120), mentions Cain’s sister, Calomena, in the Bogomil mythological elaborations in an account stemming from the 12th century, which in all likelihood reflects some more ancient Judaic extra-canonical strands, at the set-intersection between the Slavonic and Judaic extra-canonical traditions.

The story of Calomena found its place in the alternative Bogomil version on the Devil’s seduction of Eve. This particular name stems from the 11th/12th c. Jewish source, The Chronicles of Jerahmeel, which, in turn, echoes the accounts conveyed by Pseudo-Philo’s early history of Biblical events, dated to the first century. Furthermore, similar stories of Cain marrying his sister are found in the Clementine Homilies, the Book of Adam and Eve, the Cave of the Treasures and other pseudepigraphic books on Adam and Eve of Syrian origin between the fourth and the sixth century.

These accounts including Cain’s sister, which were knitted around wider and more comprehensive themes involving the sexual intercourse of Eve with Satanael and the engendering of their progeny, seem to stem from the Gnostic conceptual realm, but originated in Judaic tradition. Moreover, the circle of related apocryphal stories are also connected with the tradition of the descendants of Seth, which found their place among Gnostic cosmological narratives.

The story of Cain’s sister appears in the Slavonic, as well as Armenian and Hebrew traditions. According to Moses Gaster, the textual tradition of Cain’s sister reached the Slavonic Palaeas – historiographic compendiums containing canonical and extra-canonical narratives – from the Book of Jubilees and consequently, entered into Bogomil teachings via Pseudo-Methodius. The open questions remaining to be addressed are when, why and how did this tradition reach the Bogomils.

The Apocalypse of Pseudo-Methodius originated in the 7th century as a Syriac text, and, judging by these testimonies, may have represented an important link in the transmission chain of the Biblical extra-canonical material to Slavonic populations. Four separate redactions reached Byzantium during the early stage. It seems most likely, that it was translated into the Bulgarian redaction of the Old Church Slavonic in the late 9th-early 10th century, at the workshop of Preslav. Could that, then, be the place where the Bogomils heard of or read about the story of Calomena and inserted it into their own exegetical accounts?

Despite that this particular question revolves around there having been more or less direct contact occurring between the Jewish and Bogomil groups, which still needs to be developed more fully, it is evident that the intermingling of various ethnic populations was taking place in the Byzantine lands, thereby facilitating contact between people, and their symbolic universes.

Bogomils – medieval Eclectics? Towards a new interpretation of Bogomilism

The image of Bogomil beliefs, which emerges, is by no means a homogenous one. On the contrary, it should be better placed at the crossroads between apostolic Christianity, extra-canonical and Gnostic-leaning trends, mystical theology, and even inspired by some elements laden with some flavor of magic and paganism, most likely emanating from the Zeitgeist of the 14th century Byzantium (mostly related to the wider religious phenomena ascribable to lay religiosity).

At some point in the Middle Ages, the Bogomils (or one of their components) discovered appealing elements of lay religious practice and may have actively appropriated them into their cultic landscape. This might be one explanation as to why the Bogomils effectively disappeared from the sources. The new avenue of research on the Bogomils focuses upon the interrelation between lay religiosity and heresy, as well as upon the manner in which these popular beliefs poured into Bogomilism. The reconstruction of the filaments of Bogomils’ extra-canonical traditions, effectuated by tracing the threads of their belief system, will eventually result in a new interpretation of the Bogomils’ exegesis, ritual practice and mythology, positioned within the contexts of the multiple intellectual traditions and literate sources on which they drew.

Orlov, Andrei. “Selected Bibliography on the Transmission of the Jewish Pseudepigrapha in the Slavic Milieux,” in Selected Studies in the Slavonic Pseudepigrapha, ed. id., 203–435 (Leiden: Brill, 2009).

Radovanović, Bojana. “From “Coats of Skin” to the “Robe of Glory”: on the (ascent/descent) journey of allegory in the Visio Isaiae and Interrogatio Iohannis and beyond.” Proceedings of the Eighth International Scientific Symposium Days of Justinian I, ed. M.B. Panov, 155–165 (Skopje: University Press, 2021).

Radovanović, Bojana. “Quia me vestigia terrent. Isaiah’s vision in the Bogomil circles - performative text as a guidebook along the cosmic ascent journey?”, Proceedings of the International Conference “Cosmic Ascent in Theory and Practice”, Trinity College Dublin September 2021 (in print).

Sanidopoulos, John. The Rise of Bogomilism and Its Penetration into Constantinople. With a Complete Translation of Euthymios Zygabenos’ ‘Concerning Bogomilism’ (Rollinsford, NH: Orthodox Research Institute, 2011).

Id. “Pseudepigraphic and Parabiblical Narratives in Medieval Eastern Christian Dualism, and their Implications for the Study of Catharism,” in Cathars in Question, ed. Antonio Sennis, 151–176 (Cambridge: Cambridge University Press, 2016).