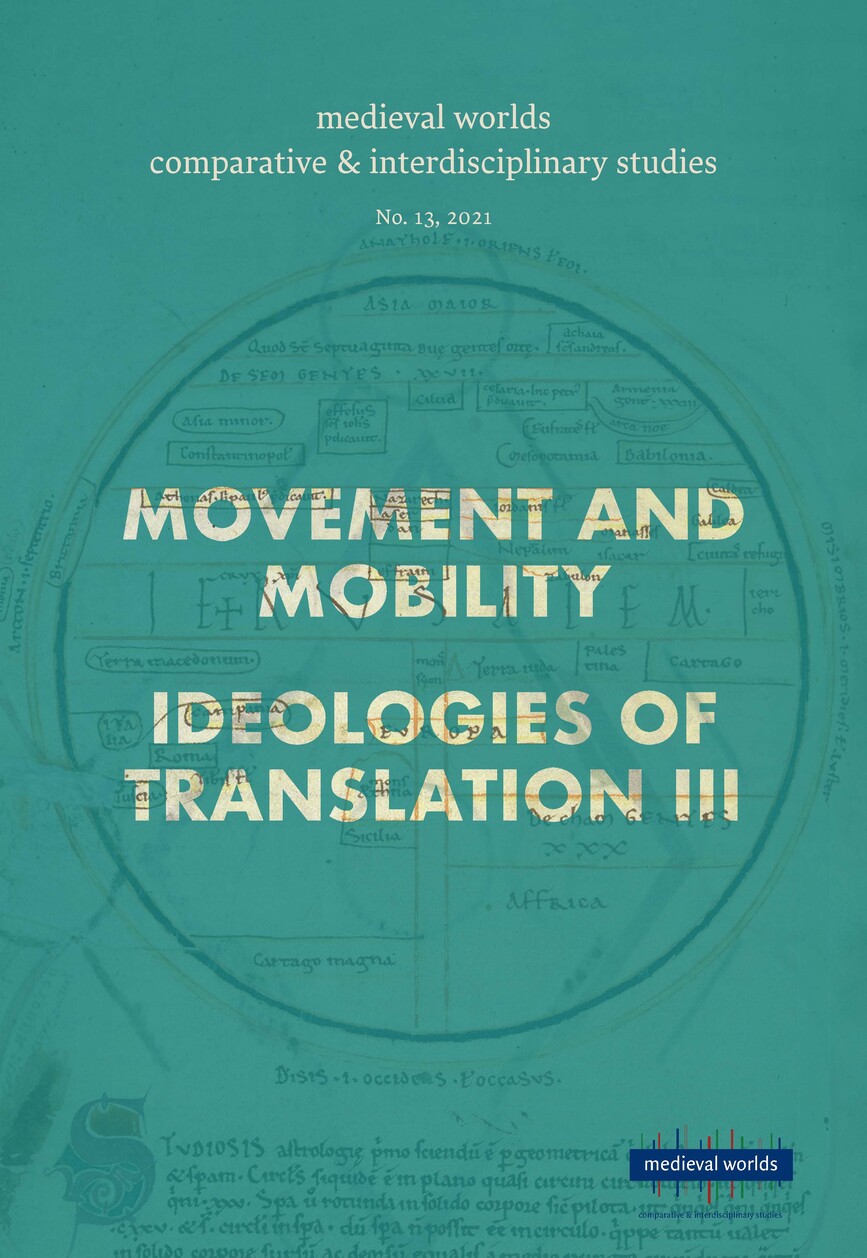 The summer 2021 volume presents a wealth of topics exploring interdisciplinary, transcultural or comparative approaches to the Middle Ages, in stand-alone articles as well as in groupings around two thematic sections. A project report gives insight into the activities of the multi-institutional team in the ERC Synergy Grant project EuQu.

Among the stand-alone contributions, Dominic Goodall and Chhunteng Hun present the readers with riveting insights into the religious politics of ninth-century Cambodia. Providing edition and translation of an inscribed two-sided stela, they add nuance to the picture of the interplay between the classical Indian religions – Buddhism, Vaiṣṇavism and Śaivism – among the Khmers.
In a co-authored article, sinologist Curie Virág and byzantinist Foteini Spingou compare literary gardens related to pleasure as a foil on which the educated elites of eleventh and twelfth century China and Byzantium could imagine and display their own ideal selves in a setting validated by classical tradition.
A 13th-century world map exceptionally combined with a genealogical chart of peoples descended from the sons of Noah takes centre-stage in Patrick S. Marschner’s fine grained analysis. It not only describes the map in relation to other contemporary charts but it also discusses the identification strategies used in presenting the different peoples of the world.

The thematic section Movement and Mobility in the Medieval Mediterranean: Changing Perspectives from Late Antiquity to the Long-Twelfth Century was organised by guest editors Christopher Heath, Clemens Gantner and Edoardo Manarini and will span the two Medieval Worlds volumes 13 and 14. In a comparative synopsis of all collected articles and their topics its introduction explores how evidence of movement and mobility can be used to trace the exchange of cultures, of ideas and products.
Movement and mobility through and across the Lombard kingdom are traced in Christopher Heath’s paper with the help of legal clauses. Focusing on articles concerned with fugitives, runaway slaves and strangers, he considers the concepts behind them and what is thus revealed about a broader interconnectivity in the Mediterranean in the 7th and 8th century CE. Clemens Gantner, in contrast, concentrates on the movements of one person in one particular year and thus draws a finely nuanced picture of not only physical but also social mobility in 9th century Italian elite circles. He analyses Anastasius Bibliothecarius in his activities as diplomat and cultural broker between Latin and Greek ecclesiastic and lay culture and between the courts of Rome, Constantinople and Pavia.
Francesco Veronese and Giulia Zornetta contribute a study on the mobility of saints’ bodies, in which the theft and transport of the relics of St Mark and St Bartholomew from the Islamic world to the Italian peninsula by boat reveal not only the political strategies involved but also the mobility of cultural models. The concluding article is Edoardo Manarini’s study on the movement of St Sylvester’s relics from Rome to the newly founded Lombard monastery of Nonantola in the 8th century. By re-evaluating dates, forms, and narratives of this journey, he uncovers the political and ideological repercussions connected with it.

Ideologies of Translation, the second thematic cluster, was initiated in volume 11. Now, under guest editor Jan Odstrčilík, part III of this series picks up the focus of volume 12 on the emerging research area of historical multilingualism, and multilingual sermons in particular. In it, philological, linguistic, palaeographic and historical methods are combined to trace the scribes’ and preachers’ engagement with the texts and with their audience. The first paper in this section explores bilingualism in the 7th-century Cambrai Homily. Gwendolyne Knight re-examines code-switching between Latin and Old Irish prose and provides new perspectives of the relationship between the two languages in this homily. Nike Stam’s paper is based on a bilingual corpus of glosses and notes in Irish and Latin that accompanies a 9th-century martyrology, known as Commentary to the Félire Óengusso. Extant in ten manuscripts, it supplies material for tracing the scribes’ different ways to deal with the bilingual material they copied. Jacobus de Saraponte’s Aurissa, a compelling and little-known piece of evidence for multilingual preaching, is introduced by Jan Odstrčilík in his preliminary study. The unedited text attributed to the 14th century receives a first detailed analysis, in which an overview of the contents is given, its advice on the use of different languages in a sermon discussed and the extant manuscripts are investigated for traces of how they were used. Helena Halmari rounds off this section with a discussion of the rhetorical characteristics of English elements in a 15th-century sermon collection (Oxford, MS Bodley 649). She shows that the code-switching between English and Latin within the sermons is not random but rather one of the rhetorical devices that the author uses for creating most persuasive homilies.

Finally, John Tolan presents an interim report on the activities of The European Qur’ān. Islamic Scripture in European Culture and Religion 1143-1850 (EuQu). This ERC synergy grant, situated at the universities of Nantes, Naples and Copenhagen as well as the Spanish National Research Council in Madrid explores the diverse roles of the Qur’ān in European cultural history and this paper focuses in particular on all research connected to the Middle Ages.

Medieval Worlds 13:
Movement and Mobility in the Medieval Mediterranean:
Changing Perspectives from Late Antiquity to the Long-Twelfth Century, I
&
Ideologies of Translation, III

Movement and Mobility in the Medieval Mediterranean: Changing Perspectives from Late Antiquity to the Long-Twelfth Century, I
Guest Editors: Christopher Heath, Clemens Gantner and Edoardo Manarini

Francesco Veronese and Giulia Zornetta
Holiness on the Move: Relic Translations and the Affirmation of Authority on the Italian Edge of the Carolingian World

Edoardo Manarini
The Translation of St Sylvester’s Relics from Rome to Nonantola: Itineraries of corpora sacra at the Crossroads between Devotion and Identity in Eighth-Tenth-Century Italy

Nike Stam
Between Innovation and Tradition: Code-Switching in the Transmission of the Commentary to the Félire Óengusso

Individual Articles
Patrick S. Marschner
The World Map of the Corpus Pelagianum (BNE, 1513, fol. 1v) and its Strategies of Identification

Curie Virág and Foteini Spingou
The Pleasures of Virtue and the Virtues of Pleasure: The Classicizing Garden in Eleventh- and Twelfth-Century China and Byzantium