Analysis of the liverwort Marchantia polymorpha genome reveals an unexpected link between the regulation of transposons and genes regulating development in plants and animals.

The new work from an international team led by Frédéric Berger and his PhD Student Sean Montgomery at the Gregor Mendel Institute of the Austrian Academy of Sciences and by Chang Liu at the ZMBP at the University of Tuebingen was published today in Current Biology. The researchers took a closer look at genome organization in the liverwort Marchantia polymorpha to understand the evolution of genome regulation in eukaryotes. Marchantia represents ancestors of land plants that emerged more than 400 million years ago, when animal life was dominated by fish. This humble moss-looking plant provides the researchers insight into how genome regulation has evolved since that time. 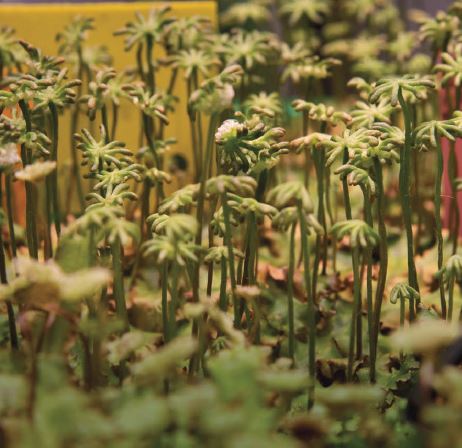 The team used new, long-read sequencing technology to generate chromosome-level DNA sequences of the Marchantia genome. In both plants and animals, chromosomal DNA is wrapped around nucleosomes that consist of proteins called histones. Nucleosomes help organize DNA into functional units and are critical for regulating gene expression – whether a gene is turned on or off. One way this is accomplished is by “decorating” histones with chemical modifications. Using their newly generated DNA sequence of the Marchantia genome, they determined how these modifications correlate with gene expression.

Most of the eight modifications they tested showed the same association with gene expression as has been previously found in flowering plans and vertebrates, indicating that these chromatin modifications have generally had the same function for hundreds of millions of years. This was not the case for a special class of genes called transposons. Transposons, commonly called jumping genes, are DNA sequences that can copy themselves and then move around the genome. Because they move throughout the genome, they drive evolution. While this is beneficial on an evolutionary timescale, hyperactivity can be deleterious and both plants and animals have evolved complex machinery to recognize transposons and stop them from moving, usually involving DNA methylation and the histone modification H3K9me. Instead, the team found that transposons in Marchantia were associated with the modification H3K27me3.

“According to the textbooks, the H3K27me3 modification is associated with developmental genes in multi-cellular eukaryotes– in fruit flies for example, these genes determine whether the fly makes a leg, a wing, or an antennae” says Dr. Berger. “However, this modification is also found in unicellular eukaryotes, but no one knew what it was doing prior to regulating multi-cellular development. Our data strongly suggest that the H3K27me3 modification was involved in silencing transposons. During evolution, as these transposons jumped around and started to regulate the expression of nearby genes, we hypothesize that the H3K27me3 modification gradually switched to regulating development while the role of transposon silencing was taken over by the more tightly regulated system of DNA methylation and H3K9 me3. This study clearly shows how much we can learn by studying histone modifications in diverse species, and we’ll be able to test our new hypotheses as we generate the histone modification maps of other early land plants.”