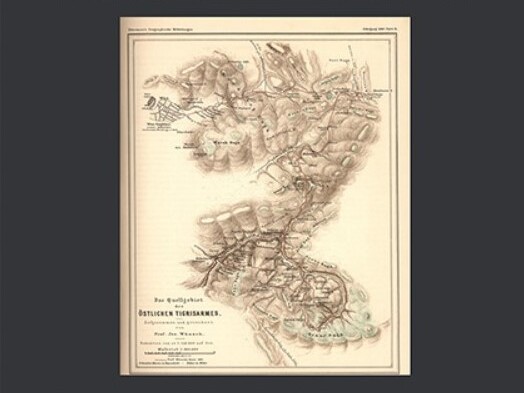 Studies of Josef Wünsch in Mesopotamia

In the second half of the 19th century, European interest in research in western Asia increasingly expanded to the areas inhabited by the Kurds. From the modern perspective, these studies contributed not only to the study of still little-known regions, but also to the introduction of Kurdish Studies. Initially the focus of the research was almost entirely dictated by British, Russian and French colonial interests, which have been subjected to a critical reappraisal over the last three decades in accordance with post-colonial approaches and their importance redefined. It is for precisely this reason that those study trips which did not have a colonial background or did not pursue economic or power-political interests are particularly valuable.
And that is also why nowadays autonomous and independently organised research, like that undertaken by Josef Wünsch (1842–1907), who worked in Prague and Vienna, can be seen as pioneering. Wünsch pursued universal research interests and produced both ethnographic and cartographic documentation. He drew up detailed cartographic material for the “Kurdish regions” and created a museum collection of everyday items. The results of his research on Mesopotamia were published in journals in Vienna and Prague, but he never produced a complete overview of his two years of research. Nowadays Wünsch's legacy is divided between various Austrian and Czech institutions.
By bringing together the various partial legacies, in this collective volume all published and unpublished results of Josef Wünsch’s research will be edited, reports in Czech incorporated through commentated translations and then a critical re-evaluation undertaken. All of this will be preceded by an introductory chapter on Austrian contributions to the development of Kurdish Studies from the late 19th century on.