CENTRE-PERIPHERY RELATIONS AND THE PURIFICATION OF SOUTHEAST ASIAN ISLAM 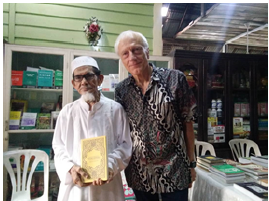 Movements of Islamic Reform in Southeast Asia always represented the movement of ideas from the symbolic centre of the Muslim world (the Hijaz, and secondarily Yemen and Cairo) to the geographical and social periphery, but their carriers were typically local men, who had travelled from such regional centres as Aceh, Banten, Mataram, Makassar, Patani and Minangkabau to Arabia in search of knowledge and prestige. Returning with the legitimacy of diplomas (ijazah) from the centre, they took on established authorities, beliefs and practices. The Ikhwani and Salafi da`wah (proselytization) of the past few decades are, at least in most of Indonesia and Malaysia, but the latest iterations in this pattern of wave upon wave of reform.
More recently, and partly in response to the Iranian revolution, there has in addition been a more active da`wah effort directed towards Southeast Asia that was initiated and funded by governments and
charitable foundations in the Gulf states. Some of this effort served to strengthen the said selfpropelled reform efforts in the more developed regions. Most of the effort, however, has focused especially on the more peripheral regions of Southeast Asia, where Muslim minorities are surrounded by Buddhist or Christian majorities and where Muslim beliefs and practices were perceived to have retained many pre-
Islamic elements.
Four decades of Salafi da`wah have profoundly influenced Muslim communities in Southeast Asia but also
engendered strong nativist responses, rejecting Salafism as ‘Arabization’ and affirming local cultural expressions of Islam (‘Islam Nusantara’).

Martin van Bruinessen his Professor Emeritus of Comparative
Studies of Contemporary Muslim Societies at Utrecht University. He is an anthropologist with a strong interest in politics, history and philology, and much of his work straddles the boundaries between these disciplines. He has conducted extensive fieldwork in Kurdistan (Turkey, Iran, Iraq, Syria) as well as in Indonesia, and has taught on subjects ranging from Ottoman history and sociology of religion to social history of the Kurds and anthropology of Indonesian Islam. Since his formal retirement from Utrecht University, he has held visiting professorships in Turkey, Singapore and Indonesia.