Language and Culture of the Western Mongolians (Oirats, Kalmyks)

The Austrian Academy of Sciences had scheduled an evening of lectures for the 12th March dealing with two topics concerning West Mongolia. 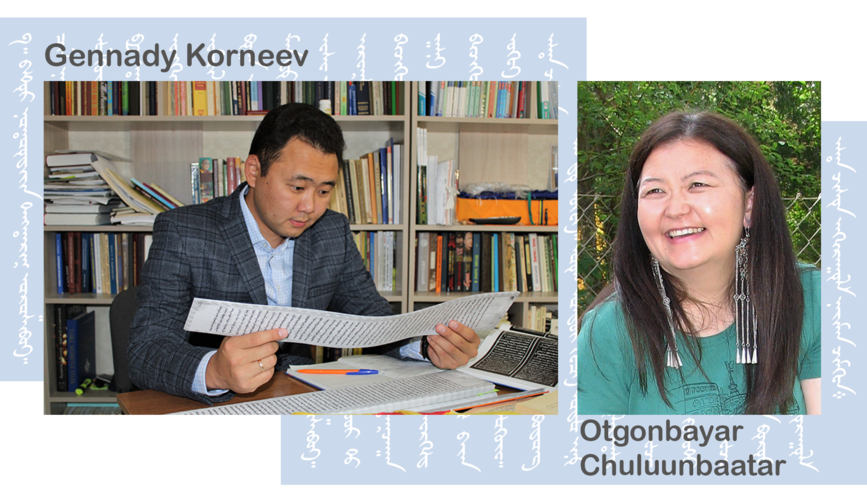 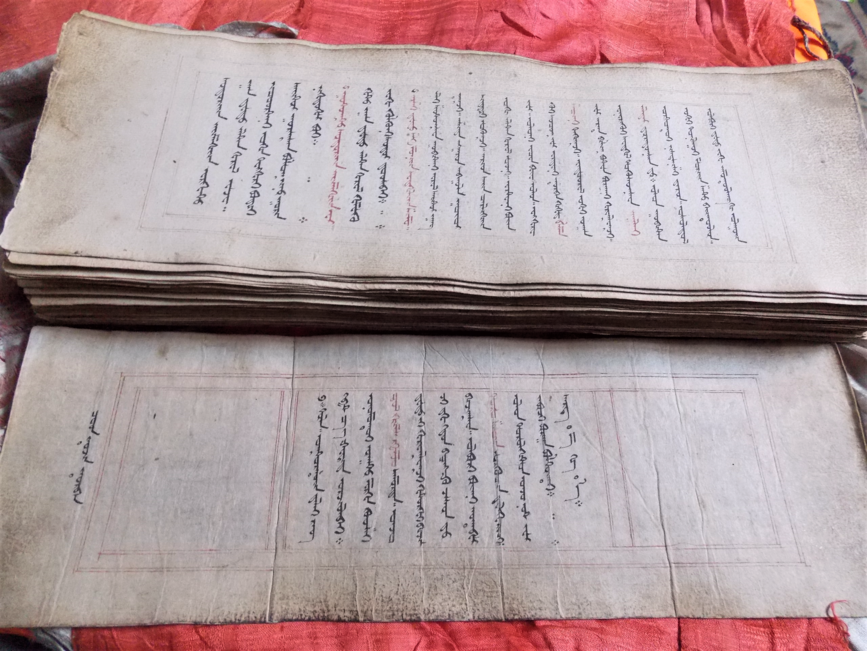 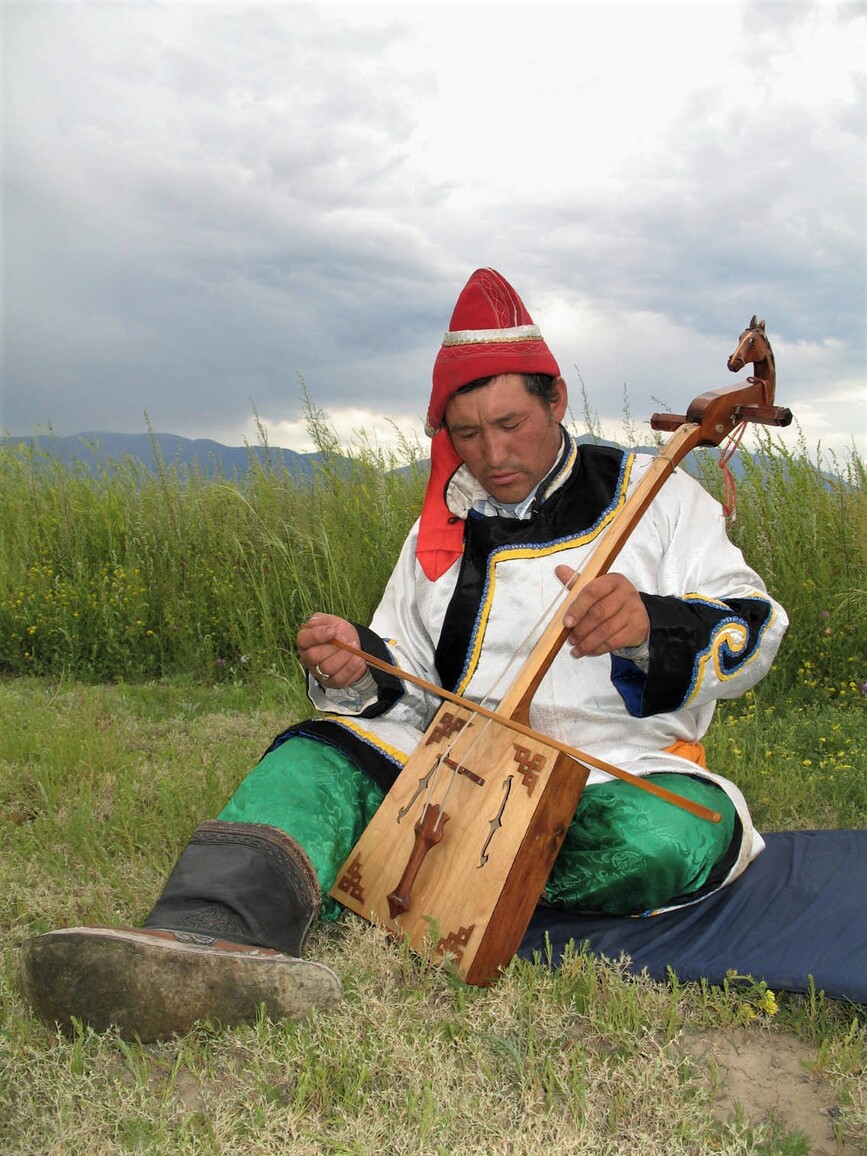 On the agenda were reports from research conducted by Gennady Korneev MA, the Director of the Kalmyk Centre for Language Development in Elista, as well as from Otgonbayar Chuluunbaatar MA, an ethnologist and philologist of the Mongolian Academy of Sciences. Due to the outbreak of Covid-19 and the resulting restrictions on public gatherings, the presentations were unfortunately cancelled. Rather than being public, they were then delivered to members of the institute only, with the VLACH president and the ÖMG chairman both in attendance. For this reason, the presentations will be expanded upon here in greater detail.

Kalmyks are a people of Oirat (or Western Mongolian) origin who have lived in the North Caspian Steppes in Europe for the past 400 years. The Kalmyk language belongs to the West Mongolian group of languages, which is believed to have developed from the classic Oirat language. The Kalmyk language has its own alphabet called “Todo bichig”, which translates into “straightforward/plain writing” and was developed in 1648 by the extraordinary “enlightened”, Zaya Pandita (also, Namkhai Jamzo). This script was in use for almost 300 years until 1924, when it was abolished by the nascent Soviet government. Nevertheless, “Todo bichig” literature has an extensive tradition. Texts in the original script are still in existence and have frequently been translated, among which are important works spanning religion, history, culture, medicine, astrology, geography and traditional customs.

Kalmykian, which over an historically significant period of time in which its speakers have been isolated from other Mongolian communities, has been influenced by both the Turkish and Russian languages. Kalmyk is the language of the people who live in the autonomous Russian region of the same name, but it also exists in some mono-ethnic Kalmyk enclaves outside of this territory. Nevertheless, in spite of the fact that there are various mass-media in the Kalmyk language (for example through the newspaper "Khalʹmg unn", or the literary magazine "Teegin Gerel"), and even though it is also used in radio and television, the language is gradually dying out. It is for this reason, among a host of further historical circumstances, that Kalmyk has been added to the UNESCO list of endangered languages.

In his lecture, Gennadi Korneev delves into the history of the immigration of Kalmyk people to the steppes on the border between Eastern Europe and Asia. He expands in detail on Kalmyk literature, in particular the “pre-revolutionary” literature written before the Soviet edict abolishing the language. His primary area of interest is in how a people deprived of the means of using their own vernacular are able to assert their self-confidence in the context of a foreign language, culture, and, of course, religion. In this context, he also explores various measures taken by the Kalmyk intelligentsia aimed at preserving a sense of national identity. Finally, the lecturer also examines the reasons Kalmyk is threatened with extinction and from this he ponders the various possible initiatives that might be made to preserve and revive the language.

The Mongolian ethnologist and linguist Otgonbayar Chuluunbaatar MA – she is herself a member of the Mongolian Academy of Sciences – has studied in great detail the “Oirat Dance Song”, a rarely-displayed feature of the “Jangar Epic” in Western Mongolia. The epic is believed to have originated in the region of Dzungarei, which is today a part of China. The Kalmyk people in particular consider this epic to be one of their traditional poetic and musical art forms, but it can be found everywhere in Mongolia, as well as in the Mongolian regions of China.  It also tells its stories in Russia. One singer, Jangarchi, recites his stories in numerous chapters or verses, which are usually about 25 in number, but some versions have over 100.

Over the course of many years of field work in the Mongolian Altai/Altay Mountains, Otgonbayar has come across an exceptionally rare dance that only a dwindling number of the Oirat community are able to perform today. The researcher has recorded and documented texts of the song to this dance as well as the artistic performances of the dancers over several years. The performance of this art form differs significantly from the typical West Mongolian "Biy" dance genre.

This special form of dance, which the presenter has observed and recorded, differs from the "Biy" dance both in its style of presentation and in the content of the texts, but clearly shows the ritual form of the epic. This special dance is introduced with an "Altain Magtaal", the song of praise of the Altai mountains, another element representative of an epic presentation.

The recorded lyrics depict a hero similar to a character from the Jangar epic, who tells of his life as a leader and warlord. His favourite horse also receives a lot of attention, which is reflected in the title of the dance. The significance of this dance and its song lies in the remarkable quality that distinguishes it as a traditional form of folk art.

The event was organised with help from the following partners: