According to historic chronicles, Mongolian ethnic groups like Naiman, Kereyid, Barghud, Öölöd (Dzungar), Khoid, Baatud, Buriad, Torghuud, Dörböd, Khoshuud, among others, periodically founded tribal unions (confederations) under the common name of Derben Oirad (Four Oirat). The first union was concluded between 1437 and 1502, the second between 1502 and 1637 and the last one between 1637 and 1758 (Kitinov 2016: 54). In the 17th century, a number of Oirat tribes expanded their territory and established the Torghuud (Kalmyk) Khanate on the lower Volga River, Dzungarian Khanate on vast lands between Balkhash Lake and the Altai Mountains, and Khoshuud Khanate on the plain around Kukunor Lake (Qinghai), east of the Tibetan highlands.

Due to a paucity of accurate sources with regards to the number of Oirat Mongolian populations in their countries of residence, it has so far been impossible to establish their exact number today. Depending on the source, the population of Oirat Mongolians worldwide is estimated at between 600,000 – 700,000. Officially, 183,372 Kalmyk people live in the Russian Federation (The Russian Federation Census of 2010), 172,000 Oirats (with the other Mongolian ethnic groups) reside in Xinjiang-Uyghur Autonomous Region of China (Xinjiang Uyghur Autonomous Region Bureau of Statistics, 2006) and 222,268 people belonging to the ethnic groups Dörvöd, Bayad, Uriankhai, Zakhchin, Torguud, Uuld, Khoton, Myangad and Khoshuud are settled in Western Mongolia (National Statistical Office of Mongolia 2016).

According to the testimony of the Persian chronicler Rashīd Ad-Dīn, already at the time of the Mongolian expansion of the 13th century, the language of the Oirats "had a little difference from the language of other Mongolian tribes" (Rashid-Ad-Din 1952: 118).

In the middle of the 17th century, the development of the Oirat language was greatly influenced by the Buddhist monk, translator of Sutras, and scholar, Zaya Pandita Ogtorguin Dalai, who created the todo bichig script (a clear script) based on the old Mongolian alphabet. The spread of documents in the Oirat states as well as correspondence between the khans and the Russian and Chinese kings and emperors was carried out in todo bichig. Oirat literary works, legends, chronicles, Buddhist texts and important legal documents between the 17th and 19th centuries were also written in this alphabet. Today, only a few periodicals in the Xinjiang province of China are still published using the todo bichig script. In Mongolia and Russia, the Oirat vernaculars are written using the Cyrillic Alphabet.

Oirat vernaculars in all Oirat speaking regions remain poorly studied to this day. UNESCO has placed the Oirat-Kalmyk vernacular spoken in Kalmykia, Russia, on a list of seriously endangered languages. “Most of the people who freely speak Kalmyk belong to older age groups and live in small villages remote from the capital. Kalmyks living in the city of Elista and larger villages almost exclusively use the Russian language. In most Kalmyk families, the dominant Russian is the main language used for communication with their children" (Baranova 2009: 26).

The Oirat vernacular spoken in the Western part of Mongolia is faced with a similar fate. The official language of education and mass media is Khalkha Mongolian, the language of the majority. “According to the present situation mostly elderly people can talk fluently in Oirad only and the main domain of Oirad is the family life. The younger generation uses Khalkha as their primary language with some elements of an Oirad substrate, but they are hardly able to speak in Oirad [sic]” (Rakos 2015: 21).

Unlike Kalmyks and Western Mongolians, their Oirat relatives in Xinjiang have preserved their native language at an extremely functional level and most of them use it in intra-group communication. However, though Oirat people in Xinjiang and other provinces of China live within autonomous Mongolian regions, they represent the smallest ethnic minority, which exposes them to a greater risk of language shift towards Chinese in the decades to come.

Kitinov, Baatr U. (2016): "On issue to the composition of the earliest Oirats" in: RUDN Journal of World History. Volume 3. People’s Friendship University of Russia

The Russian Federation census of 2010

UNESCO Atlas of the World's Languages in Danger 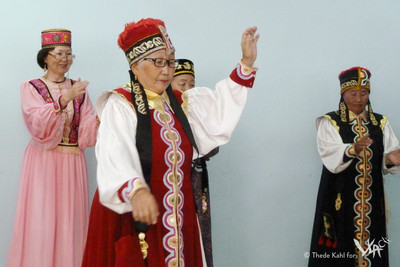