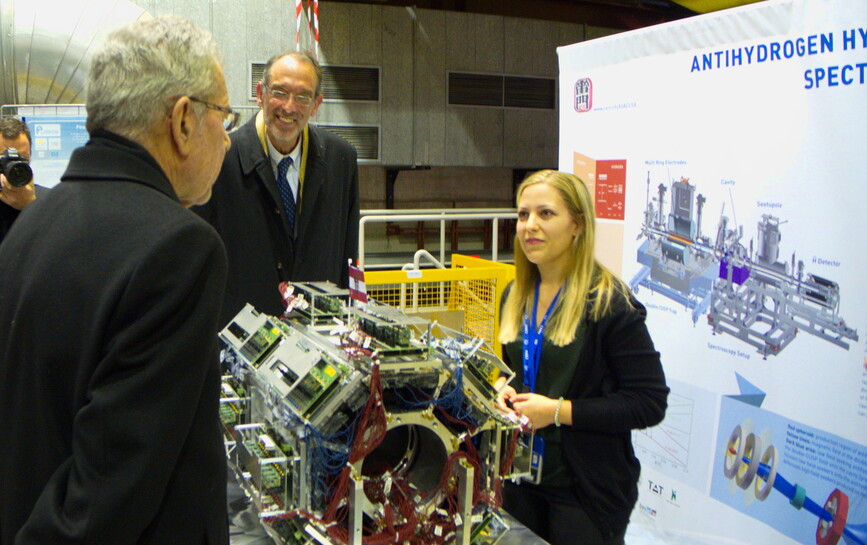 The ASACUSA collaboration at the Antiproton Decelerator at CERN had the honor to welcome the Federal President, Alexander Van der Bellen, together with the Federal Minister of Education, Science and Research, Heinz Faßmann, as well as other members of the Austrian delegation who visited CERN on 27 February this year. Prof. Eberhard Widmann, the ASACUSA co-spokesperson, gave an introduction tour to the distinguished guests, explaining the general aspects of antimatter research and its importance for our understanding of the Universe. He discussed in particular the antihydrogen studies in ASACUSA and the measurement of its hyperfine structure.

Students and postdocs from SMI presented to the eminent guests the Institute’s  main contribution to the experiment – a state-of-the art detector for antihydrogen. They proudly described the design of this hodoscope and showed how the particles produced in the antihydrogen annihilation are detected with the scintillating bars and fibers. They also illustrated how the signal from these particles is used to reconstruct the annihilation vertex in 3D. The President and the Minister seemed very pleased to hear about this work and were delighted by the enthusiasm and the success of the young researchers.

The attending representatives of the Austrian press were also very intrigued to find out more about the antimatter story at ASACUSA. They profited from the discussions with the SMI members to authentically reflect the antimatter research in their articles.