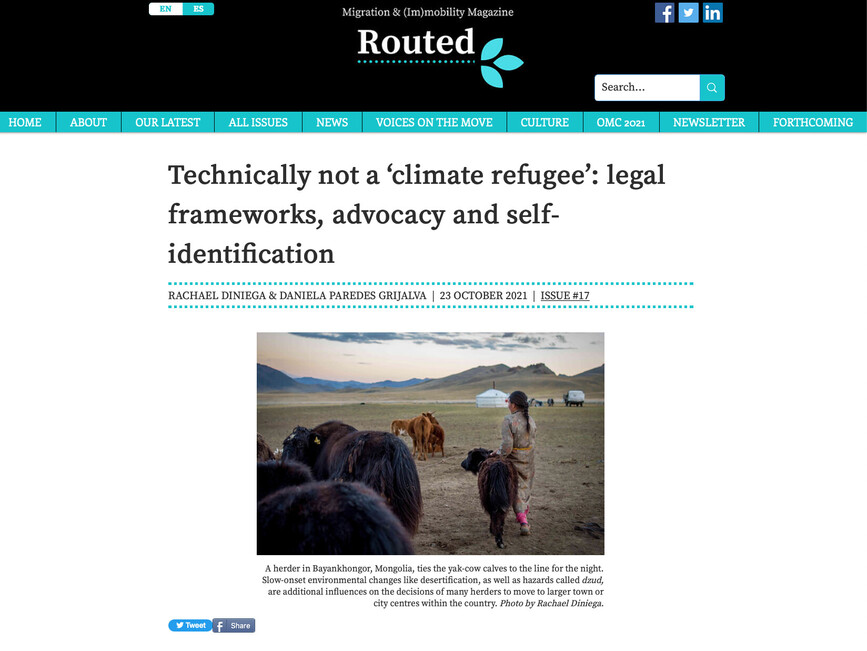 Technically not a ‘climate refugee’: legal frameworks, advocacy and self-identification

This issue (17) of Routed looks at the Language of Migration through short pieces focusing on specific terms. In ‘Technically not a ‘climate refugee’ a brief overview of the emerging field of study on environmental migration is sketched. From ‘environmentally displaced persons’ to ‘climate refugees’ or ‘environmental migrants’, popular news media have used a variety of terms to describe a phenomenon that is often oversimplified or misunderstood. That is: the environmental impact of climate change will affect the livelihoods and lives of people around the world, and eventually their (im)mobilities. Some may choose or need to move away from their homes; others may stay. For this oft-cited, yet thoroughly diverse experience, the terminology and the numbers have been key centres of debate.

While Homo sapiens has always been on the move, only from 1985, with Essam El-Hinnawi’s coining of the term ‘environmental refugees’, did the field of climate change as a cause of migration develop into a sphere of research. In the 1990s and 2000s, ‘alarmists’ and ‘sceptics’ disagreed over estimates of 150 million ‘climate refugees’ spilling across borders by 2050. Sceptics said these numbers did more harm than good, misrepresenting the realities of people who would mostly move internally and for multiple reasons causing a range of movements from forced to voluntary. Despite these efforts to diversify narratives, alarmist voices persist in today’s milieu.

In this terminological minefield it remains a challenge to holistically situate people’s experiences, a challenge that has recently led to a turn in discussing (im)mobilities in the context of environmental change. Empirical evidence points to people who strategically employ legal terms such as victims in order to claim their rights in their interactions with the state, while simultaneously resisting a narrative of passiveness and victimhood when they self-identify as survivors.