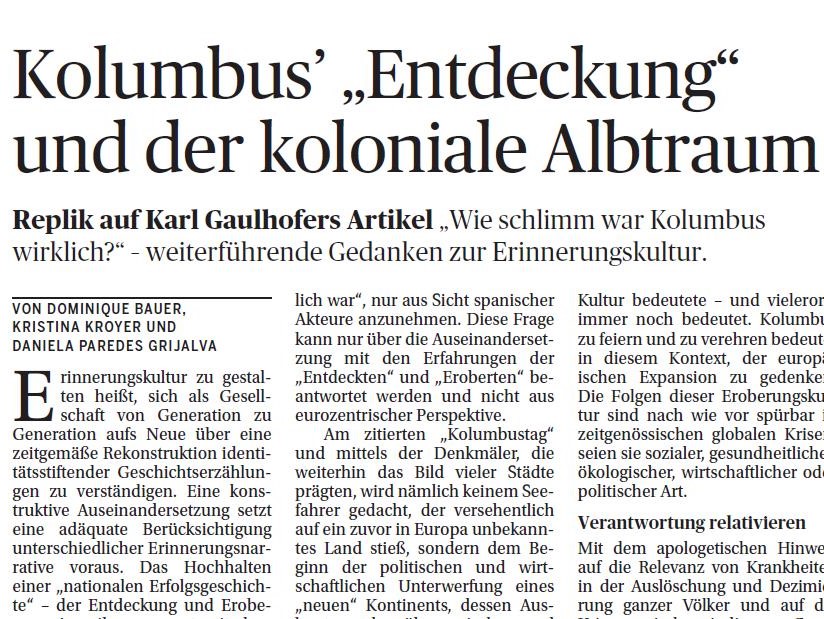 This is a guest column replying to an article placed under the history section of the Austrian quality daily newspaper Die Presse that relativizes facts and consequences of colonization, taking issue with the toppling down of statues in the framework of the Black Lives Matter movement. This reply places the current glorification of Columbus in a historical context and calls for a take on history that allows for revision and rewriting.

Celebrating and worshipping Columbus means commemorating European expansion - an age when it was heroic to subordinate nature and foreign cultures and to divide people into civilized and primitive, rulers and ruled. The consequences of this culture of conquest can still be felt in contemporary global crises, be they social, health, environmental, economic or political.

With the apologetic reference to the relevance of diseases in the extermination and decimation of entire peoples and to the wars between indigenous groups themselves, an attempt is made to relativize the responsibility of brutal conquerors and to play down the violence and racism with which indigenous peoples were confronted in the "conquest" of the continents.

The euphemistic depiction of "language saviors" and cultural mediators of missionaries who began to learn and write indigenous languages for the purpose of a more effective Christianization in the struggle against indigenous spirituality testifies to historical transfiguration. If we speak of "Columbus" in connection with his ideologization through holidays and statues in nations whose wealth is based on colonial exploitation it makes solemn reference to a moment in history that paved the way for genocide and the expulsion of diverse peoples and slavery in order to lead the conquerors to wealth on looted land. Christopher Columbus, the navigator who spent more time at sea than on American soil, may not stand for the dark history of America; Christopher Columbus, the discoverer of the "new" world, to whom statues and holidays are dedicated, does indeed!

(One of the authors, Daniela Paredes-Grijalva, is a PhD-student at ISA.)