WHAT IS "STATUTE COMPUTATIONIS NUMERUS"? WRITING HISTORY AS A PROCESS OF TRANSFORMATION IN THE HILDESHEIM ANNALS 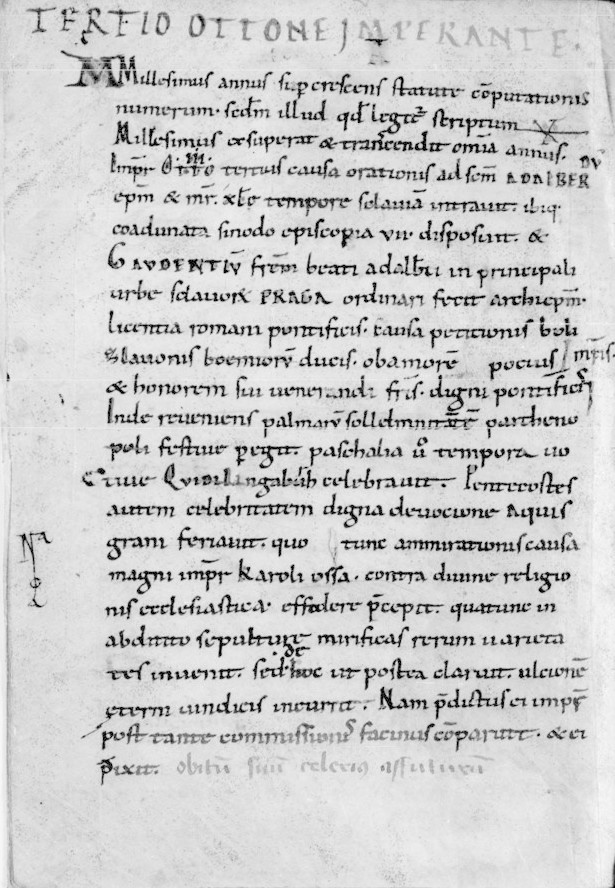 What did the author have in mind when he noted this remarkable statement? The AH, that survives in only one manuscript − Paris, BNF lat. 6114 − are a compilation of sources that transmitted Carolingian history into the High Middle Ages. What we can observe is a patchwork history with barely polished breaks and discontinuities between the different blocks of entries (the redactions), that nevertheless tell a coherent story of historical change, fragility and uncertainty, and the urgent call for correct behaviour and stability. To use the past means dealing with the pressures that arise from it. Writing annals is not just about creating continuity and coherence in history (although their repetitive form is very suggestive of this).

Thus, a huge amount of sources from the Carolingian period were integrated and adapted to compile the AH, such as the Annals of Hersfeld, a history from the beginning of the world until 974, the Royal Frankish Annals, the Annals of Fulda, and various annals from Lorsch. The final redaction, covering entries up to 1137 was compiled in the form of blocks of text. Subsequently, there are many breaks between the single blocks and several changes of scribe, visible in the graphical layout of the manuscript.

For AD 998 an annotating hand added an originally omitted passage about Archbishop Johannes Philagathos of Piacenza, the former teacher of Emperor Otto III, cancellarius in Italy and high-ranking diplomat. In February 998 the Roman senator Crescentius Nomentanus persuaded him to replace Pope Gregory V, whom he had expelled from Rome against the will of the emperor. Therefore Otto besieged Castel del Angelo, where the renitent senator defended himself. The passage reports that the antipope John XVI (the invasor Iohannes) was blinded, his nose and tongue cut off, and deposed, and Crescentius was executed with twelve followers (AH, ed. Waitz 27; Paris, BNF lat. 6114, fol. 36r). This event was a scandal and a shame for Otto III, who was proud that he was frequently surrounded by holy men. When the badly injured anti-pope had to ride through Rome on a donkey in a ridiculous habit, the hermit Nilus of Rossano threatened the emperor with the prospect of the Last Judgement. Most probably the report is taken from the Annals of Niederaltaich, together with the subsequent mutilated sentence about a woman in Bavaria who gave birth to five boys at once (Annales Altahenses, ed. Giesebrecht 16). Vertically on the right margin of fol. 36r, a further scribe added a note to 999 that reports the death of Empress Adelheid, of Mathilda of Quedlinburg, the aunt of Otto III, and of Pope Gregory V, who was succeeded by Silvester II (AH, ed. Waitz 27).  All bad news!

With the entries covering the years 1000–1040 a new redaction of AH starts (Paris, BNF lat. 6114, fol. 36v).  Its focused reports about Otto III are introduced with capital rubrics – “TERTIO OTTONE IMPERANTE”. The account starts with the unattributable quotation ‘Millesimus exsuperat et transcendit omnia annus’. AH is one of several texts that interpreted AD 1000 as an important milestone in history. What is the statuta computatio? What does exsuperat mean in this context? This chiliastic version of time reckoning obviously provided a later reflex of an alternative interpretation of the eschaton. Can we observe an “obsessive concern for chronology”, as Finley wrote, a “fièvre computistique”, as Bernard Guenée once put it? (Finley, Use 30; Guenée, Histoire 152)

After the Carolingians’ efforts to establish a stable basis for computus, influential computistical texts were written in the 10th century with an intense use of Late Antique and early Medieval resources, for example by Abbo of Fleury, Helperic of Auxerre, and Notker of St Gall. In order to ascertain the age of the world in this tradition, the 6 days of creation were, according to Psalm 90:4, multiplied by 1000, and the Creation was set in the year 5000 BC. This approach was in competition with other systems that calculated the beginning of the world differently, such as Augustine, Jerome, or the Venerable Bede. The latter’s elaborate Easter tables, which are based on those of Dionysius Exiguus, and the calculation of the Year of Creation and the Year of Christ’s Incarnation (Annus Mundi and Annus Domini) could be found, by the late 10th century, in any important monastery or church throughout Europe.

The acute awareness of the significance of AD 1000 that many manuscripts indicate, even in their mistakes, often focused specifically on this year. Usually, the scribes began or ended an Easter table, no matter how short, with a nineteen-year cycle. But as AD 1000 fell in the middle of the 52nd Easter cycle AD 988–1006, one would not expect to see it at the beginning or end of Easter tables. Although a number of tables either begin or end with AD 999, 1000, or 1001, this is not an explicit expression of apocalyptic expectation. Quite the contrary, as these entries were written from a safe distance after the year 1000, they probably did so to emphasise the passing of this year and, thus, express that the Apocalypse did not, and will not happen that way. As Adam of Bremen put it: “Interea millesimus ab incarnatione Domini annus feliciter impletus est, …” (Adam of Bremen, Gesta 2, 42, ed. Schmeidler 101) This corresponds to Isidore of Seville’s and Bede’s insistence that the end of time cannot, and must not be reckoned by man, as it will happen exclusively according to God’s predestination (Beda Venerabilis, De temporum ratione 66, ed. Jones 464; id., De temporibus 22, ed. Jones 611; Isidore of Sevilla, Etymologiae V, 39, ed. Lindsay s.p.; cf. Palmer, Apocalypse ch. 7).

Different computistical anomalies that are attested in this era emphasize the exceptional status of AD 1000. For Abbo of Fleury, 1000 was in fact 1021, and for Heriger of Lobbes it was 992. According to various Latin and Byzantine traditions, that year came in 491 (Chronicon paschale), 492 (Era of Constantinople), 500 (Augustine), or 508 (Alexandrinian Era). This focus on the end of the millennium also accounts for the renewed interest in the Annus mundi chronology, which had passed the eschatologically significant year 6000 two centuries earlier.

Bede had already corrected the reckoning of Jerome, who set the beginning of the world in the year BC 5199, so that AD 800 would indicate the passage of 6000 years. Following the Hebrew Bible, Bede reckoned 3952 BC as the year of the Creation and thus moved the eschaton preventively to AD 2048. In parallel, the remarkable note in AH contradicts all theories that place the Creation in 5000 BC, or earlier. AD 1000 has exceeded, has overgrown all calculation! So, we are on the safer side. But even then, the statement in AH remains somehow opaque, as at least the well known 56th Bedan tabula paschalis runs until AD 1064.

So, it seems to be appropriate to be sceptical about the assumption of a widespread and deep-seated apocalyptical fear at the end of the 10th century. It was not necessarily the fear of the end of the chiliastic thousand-year period which made historiographers so sensitive to these years, but rather the memory of the millennial anniversary of Christ’s Incarnation, and subsequently the memory of his Passion in AD 1033. The importance of AD 1000 was also known at Otto’s court: each of the dates in the 69 charters from the years 999 and 1000, with the formulation anno incarnationis, emphasizes this year − a figure that had become significant in the Book of Revelation and Augustine’s commentary as a symbolic period leading to the end of the end times.

It was probably Otto’s intention to demonstrate the fulfillment and obligatory character of the imperial task to spread the Christian faith, especially at Pentecost in the year AD 1000, as Knut Görich suggested (Görich, Erinnerung). The AH report mainly two events for this year: Otto III entered Sclavia for prayer and went to Gniezno in order to ordain Adalbert of Prague’s half-brother Gaudentius as its first archbishop. Furthermore, the emperor celebrated Pentecost at Aachen and ordered the opening of Charlemagne’s tomb ammirationis causa, as the annalist states laconically. This action is judged to be against Church Law (contra divine religionis ecclesiastica). (AH, ed. Waitz 28; Paris, BNF lat. 6114, fol. 36v)

Otto connected the emperor’s obligation to spread the faith with the memory of Charlemagne, who was credited with the mission of the Saxons, and whom Otto promoted as a saint. This worship developed within a political context that undoubtedly intensified the memory of the Carolingian ruler as a role model. By the choice of Aachen as his burial site, Otto III adopted the tradition of Charlemagne to an extreme degree. However, Charlemagne was not recognized as a saint at Aachen − perhaps because a worthy martyr could only be someone who suffered martyrdom for faith’s sake or lead an ascetic life; and neither applied to Charlemagne. Otto’s early death scarcely two years later put a definite end to any potential plans.

Thus, the chiliastic statement in the AH does not only point to the safe passing of the millennium, but also to the fact that the reign of Otto III and its political activities have passed. Once more, the annalist criticized the emperor’s ecclesiastical politics. The long history enfolded in the world chronicle and the annals shows that time changes political mistakes, and that both entities, the Roman Empire and the Roman Church, hold the entire responsibility for a successful future. Thus, AH used several modes of order – the annalistic, the world-chronistic, the computistic, and the eschatological order – to present their narrative of historical coherence versus fragmentation.

Over the last half century medievalists have come to view the period around the turn of the millennium as a moment of such pervasive social and cultural transformation that some historians such as Guy Bois spoke of a revolution or mutation de l’an mil. Apocalyptic and millennial expectations are seen among the most powerful forces generating social change. Apocalyptic imagination, thus, was far more than a mere indicator of anxiety, it was part of a complex discourse on correct moral behaviour, of which the Papacy and the Roman Church were the predominant guardians. Thus, the long distance past has to be integrated in order to gain a long-term perspective. The frame of this social perspective was mainly an ecclesiastical and spiritual one.

Landes, Richard, Heaven on Earth. The Varieties of the Millennial Experience (Oxford/New York 2011).

Palmer, James, The Apocalypse in the Early Middle Ages (Cambridge 2014).