Uses of the Past in Times of Transition: Forgetting, Using and Discrediting the Past & Approaches to Global Epigraphy 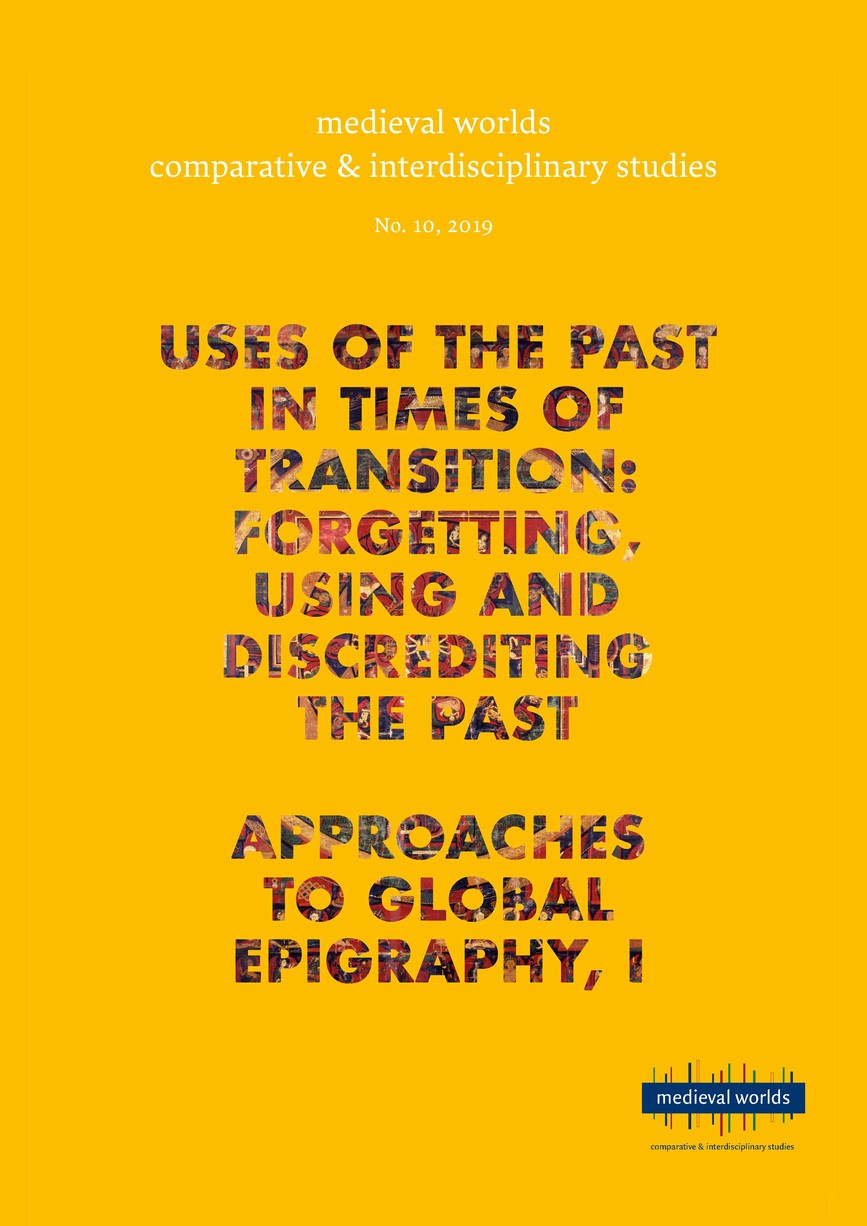 In this issue we present the outcomes of two comparative and interdisciplinary research initiatives undertaken by colleagues at IMAFO:

Uses of the Past in Times of Transition: Forgetting, Using and Discrediting the Past was the focus of the final conference of the HERA Project: After Empire. Using and Not Using the Past in the Crisis of the Carolingian World, c. 900-1050 hosted in Vienna in early summer 2019. It resulted in continuous in-depth collaboration and engaged discussion, which led to this fine selection of articles, all of which consider the question of how different pasts were constructed by medieval authors in order to re-form and re-value their worlds, as Max Diesenberger points out in the introduction. Stefan Esders traces fiscal revenues and rights to the episcopal church of Chur in the mid-ninth century in his case study on processes of fiscal delegation in Churraetia, where many features of Roman provincial administration and statehood were maintained well into the Carolingian period. The delegation of fiscal rights was closely linked to situations in which kings and grantees cooperated and the episcopal church thus became a governance actor exercising public functions such as tax collection, jurisdiction and military recruitment. Sarah Hamilton’s contribution compares compilations of martyrologies in both the Latin Frankish world of the Carolingians and the vernacular world of Anglo-Saxon Wessex in the ninth century, and asks whether these sources should, in fact, be viewed as historical texts. Emma Loosley Leeming wrote her article on the two kingdoms in Georgia in the early Middle Ages and explores the construction of Kartvelian national identity through the lens of ecclesiastical history, particularly with regard to the narrative of the (As)Syrian Fathers that was deliberately obfuscated in the quest to create an “Orthodox” past. Turning to the north-eastern region of the Iberian Peninsula (medieval Catalonia) and the adjacent French region (Septimania), Matthias Tischler investigates processes of transforming the area from a peripheral zone of the Carolingian Empire into a central region of Latin Christian Europe between the ninth and the eleventh century. He chose this subject for his comparative perspective also because of the local context of an intermediary zone between the Mediterranean and central European worlds, where the Christian north and the Muslim south interacted. Jorge Elices Ocón and Eduardo Manzano Moreno engage with the Iberian Peninsula as part of the so-called dār al-Islam, the huge realm that extended from the shores of the Atlantic to the borders of the Indian subcontinent, and the dramatic shift from the notions, ideologies and frames of reference that emerged in other western regions of the former Roman Empire therein. They argue that from the eighth to the tenth century significant changes of political and social circumstances effected receptions, perceptions and ideas on classical Antiquity in both al-Andalus and the Christian north. Royal marriage, Frankish history and dynastic crisis as addressed in Regino of Prüm’s Chronicle are the focus of Eric Goldberg’s and Simon MacLean’s article. They show how the historian Regino drew from the distant past of the Franks and adapted his stories about good and bad royal marriages to late Carolingian sensibilities. In their interpretation Regino’s interest in royal marriage is a reflection of his anxiety about the marital status of the reigning East Frankish king Louis IV “the Child” (900-911). Tim Greenwood’s study examines how Roman-Armenian encounters were represented in Armenian historical literature by comparing three compositions. Each offers a different perspective, yet in all three, the Roman past was used as a mirror to comment upon the Byzantine present. Another contribution to this cluster presents the narrative function of medieval hostages as a foil for writers to construct stories of victory, defeat, piety, mercy and cruelty. Through a transregional approach Alice Hicklin points out that medieval hostages stood as a surety given by one party into the custody of another, with the understanding that hostages bound their donors to a particular obligation or set of terms outlined by the hostages’ recipient.

What follows is our new thematic focus on Global Epigraphy, which we started with this issue. Andreas Rhoby, Veronika Scheibelreiter-Gail and Andreas Zajic, who are driving forces behind the related research initiative “Epigraphik in der Hollandstraße”, provide the introduction. Elisabeth Rathmayr and Veronika Scheibelreiter-Gail deal with inscriptions on the floor mosaics of a residence in Skala on the island of Cephalonia. They address the archaeological context of the inscriptions, their representation and legibility as well as their contents and explain the unusual figurative representations on the mosaic floors and the length of the inscriptions by comparing them to mosaics from the Roman colony Patras. Selected examples from key areas of historical Western Tibet, such as Purang and Guge, are presented by Christian Jahoda. He discusses the geographical-historical setting and the spatial and functional contexts of inscriptions, which are mainly characterized by Tibetan Buddhism, the dominating emic concept of religious purpose, the Tibetan terminology related to inscriptions, and the technical and material realities. Rich illustrations highlight relevant visual aspects, and administrative and ritual practices are explained.