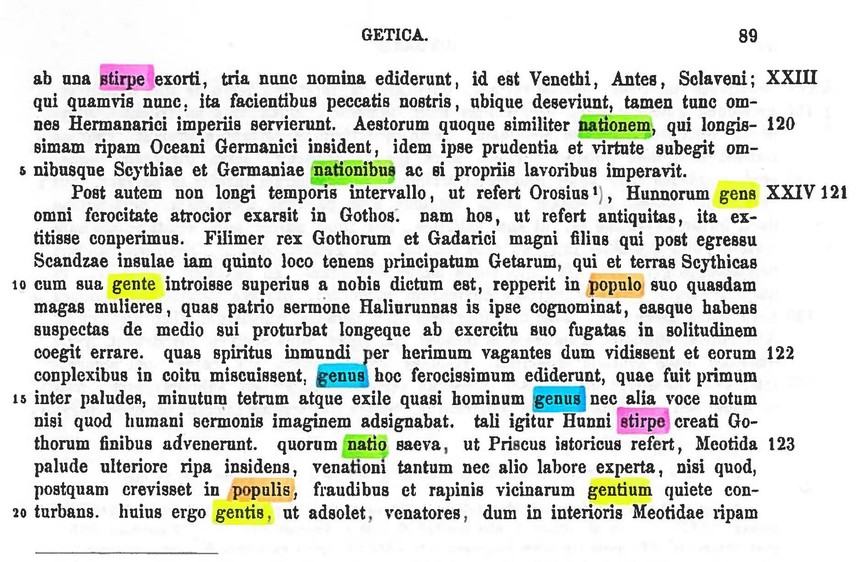 The background to Jordanes' Getica, which was written in the middle of the 6th century in Constantinopel, is quite complex. There have been discussions about it for decades or even centuries, because solid and confirmed information about the author, who was likely of Gothic origin himself, and his text is scarce. We know that Jordanes wrote a second text, a Roman history, at the same time and we also know that he had a very prominent template for the Getica: In the prologue he admits that a friend requested that he summarize the 12-book gothic history of Cassiodorus, who was the main figure in charge of administration under Theoderic the Great and his successors at the Ostrogothic court in Italy until around 537. We do not know the extent to which Jordanes' Getica is identical with Cassiodorus' gothic history, since the latter has not survived. Furthermore, the Getica raises a lot of questions. For example, its intention is not completely clear nor are the origins of certain details in the narrative, and in addition, it contains a lot of historically incorrect information. For these reasons, especially in the scholarship of the 19th and also 20th centuries, it has often been perceived as a source of bad quality. Nevertheless, for a study on ethnic terminology, this text is definitely an abundant source.

I started my work with a collection of statistical data which I derived from the basis of common critical text editions: As a result of this study, it has become apparent that there are an above-average number of mentions of gens, populus, natio, stirps and other topic-related terms in the Getica – especially when it is taken into account that this text is quite short in comparison to other historiographical sources written in Late Antiquity and the Early Middle Ages. For this reason, it seems quite useful to take a deeper look – in spite of (or actually due to) the fact that Jordanes seemed to use different ethnic terms synonymously. The aim of this study was to learn more about their use in the Getica in order to identify similarities between these terms as well as differences.

The concept of gens especially has turned out to be quite versatile, since it incorporates a broad range of meanings. To a large extend, gens serves as a self-designation for the Goths, but gens is also used in combination with a lot of other ethnonyms. Furthermore, gens is used to depict groups of completely different size and function: Gens describes a large group of people including women, children and also pack animals on the migration through the European continent. Gens can stand for the close following of a leader, of a king. When gens is used to describe the entourage of a king, this can mean family members as well as elite soldiers. Gens can also mean a military unit.

In the case of the gens or gentes, a broad range of different adjectives are attributed – this does not result in a consistent picture. There are several examples for fortissimae gentes: Different groups of Huns are called fortissimae gentes, but also the Goths are entitled as a gens fortissima at the end of the Getica after they had already been defeated by the Romans. The Gepids are depicted as a calm gens, a gens quieta. The famous Gothic king Ermaneric is told to have defeated many very warlike nordic gentes. The gens of the Rosomoni is called an unfaithful gens and finally the Goths of Wulfila are described as being a large gens, but at the same time poor and unwarlike.

The Getica contains stereotypical depictions of barbarian gentes, but they play a minor role. Jordanes gives a brief account of the sack of Rome in 410 by Alaric and his troops: The Goths plundered the city on Alaric's order, but they did not set fires, nor did they violate the sacred places, as gentes – that means, wild peoples or barbarians – would do. This is the only example where gentes are used in a significantly negative manner to explicitly mean pagans. That goes for the related term gentiles as well: There is only one use of gentiles in the Getica at all. In general, the contrast between the populus Romanus and the barbarian gentes, as known from Roman ethnographical tradition, apparently does not exist.

Jordanes tells us that, before the sack of Rome, the Visigoths sent an embassy to the emperor Honorius to ask him if he would permit them to settle in Italy. They promised, if Honorius would permit them, that they would live peacefully together with the populus of the Romans, so that one could think of them both being one gens. This example shows, that obviously the members of a gens were perceived as being tied together by such a strong intrinsic sense of solidarity, that peace would be garantueed.

The concept of populus in the Getica is not reserved to depict the Romans, as one would perhaps assume: A major part of uses refer to the Goths, some to the Romans and some also to the Huns (!) and the Gepids. That means, populus/populi describes the main protagonists of the narrative, which are Goths, Huns, Romans and Gepids.

Furthermore, populus is connected to political signal words, such as rex, regnum and regnare. There are also examples for populus meaning the population or inhabitants of a certain area or city. Populus is obviously associated with a political-urban-civilized environment, although this does not necesserily mean a more complex civilization. Within the description of Britannia, Jordanes tells us about the populi living there: He calls all of them inculti, as well as their kings. In addition to the political aspect, populus seems to be determined by a certain population size. For example, there is a comment about Attilas sons: Jordanes says that Attila had so many sons that because of their large number they could almost form a populus.

Jordanes obviously uses officina gentium and vagina nationum more or less synonymously to describe the island Scandza where the Goths might have come from. If we take the term officina gentium literally as a workshop of gentes, we may assume that the author's concept of gens and gentes incorporates the possibility that they could be made artificially. In addition, this example also specifies his idea of the nationes: In contrast to the gentes, who are brought out of an officina, nationes come out of a vagina. This obviously means, they are imagined as being born naturally.

As these examples have shown, analysing ethnic terminology can be a new approach for studying a source that has already been worked on by generations of scholars, since it puts a strong focus on the usage of language. The Getica is an excellent example to show how flexible and versatile ethnic terms could be and how they could be used to express different intentions within a specific scope of meanings. The author's specific use of linguistic expression reveals what kind of thinking patterns and pictures of language with regard to the developement and transformation of different kinds of groups were credible for him and his audience.